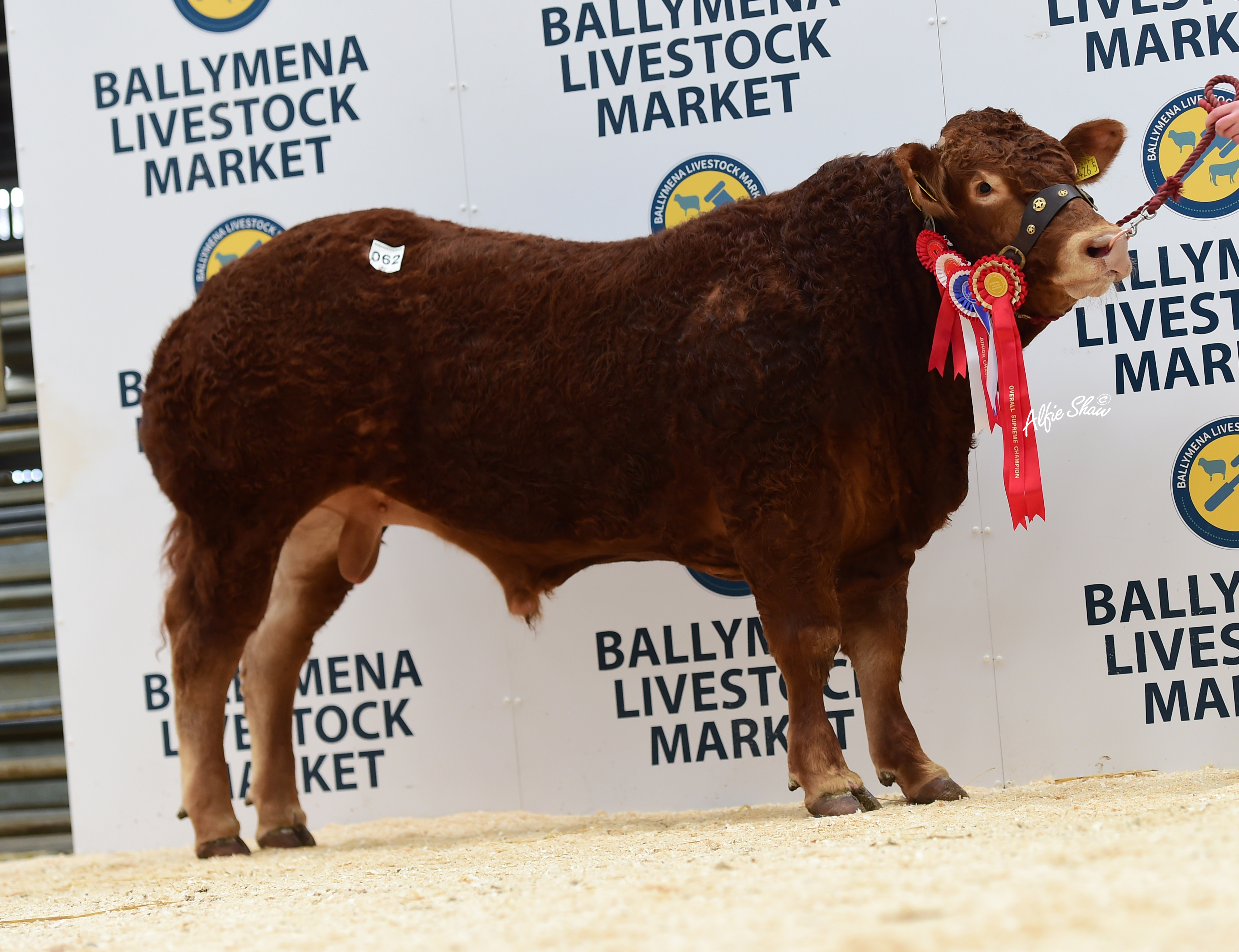 Realising the top price of 5300gns was Carmorn Nutcracker bred by C & F McAuley, Toomebridge, Co Antrim. This February 2017 born embryo calf is sired by Trueman Jagger and out of the home bred dam Carmorn Gucci. He had caught the eye of Judge Blair Duffton from Aberdeenshire, Scotland at the pre-sale show and was awarded Overall Supreme Champion, Overall Male Champion and Junior Male Champion accolades.

The Judge commented “Carmorn Nutcracker is a modern bull with a tremendous top line and back end. I believe he will do well with cross bred cows and will produce superior calves.” Come the sale and Blair followed through with this sentiment as he went onto be the successful bidder. Carmorn Nutcracker now heads home to Aberdeenshire with him.

Gaining the second top price of 5000gns was Ballyrickard Mrbean bred by I N Davidson, Larne, Co Antrim. This November 2016 born bull is by Norman Ely and out of the dam Ballyrickard Judy. Mrbean is also heading to Scotland having been purchased by G Yarr from Angus.

Selling for 4400gns was Archies Maximus bred by McKenna Bros, Bellaghy, Co Derry. This November 2016 born bull is sired by Archies Jazzyjeff and out of the dam Goldies Interflora. Maximus now heads to a new home with Ross Millar, Newtownstewart, Co Tyrone.

Senior Male Champion Rathcarn Mandela sold for 3800gns and was bred by S & D O’Kane, Maghera, Co Derry. This June 2016 born embryo calf is by Ampertaine Elgin and out of the dam Ampertaine Ikea. Mandela was purchased by A Birt, Newtownards Co Down.

In the female sale fetching the top price of 3400gns was the pre-sale show Female Champion Rahoney Natasha bred by H & D McFarland, Trillick Co Tyrone. This April 2017 born embryo calf is by Ampertaine Gigolo and out of the dam Rahoney Hazel. Natasha was purchased by Limousin breeder Mel Lucas, Antrim, Co Antrim.