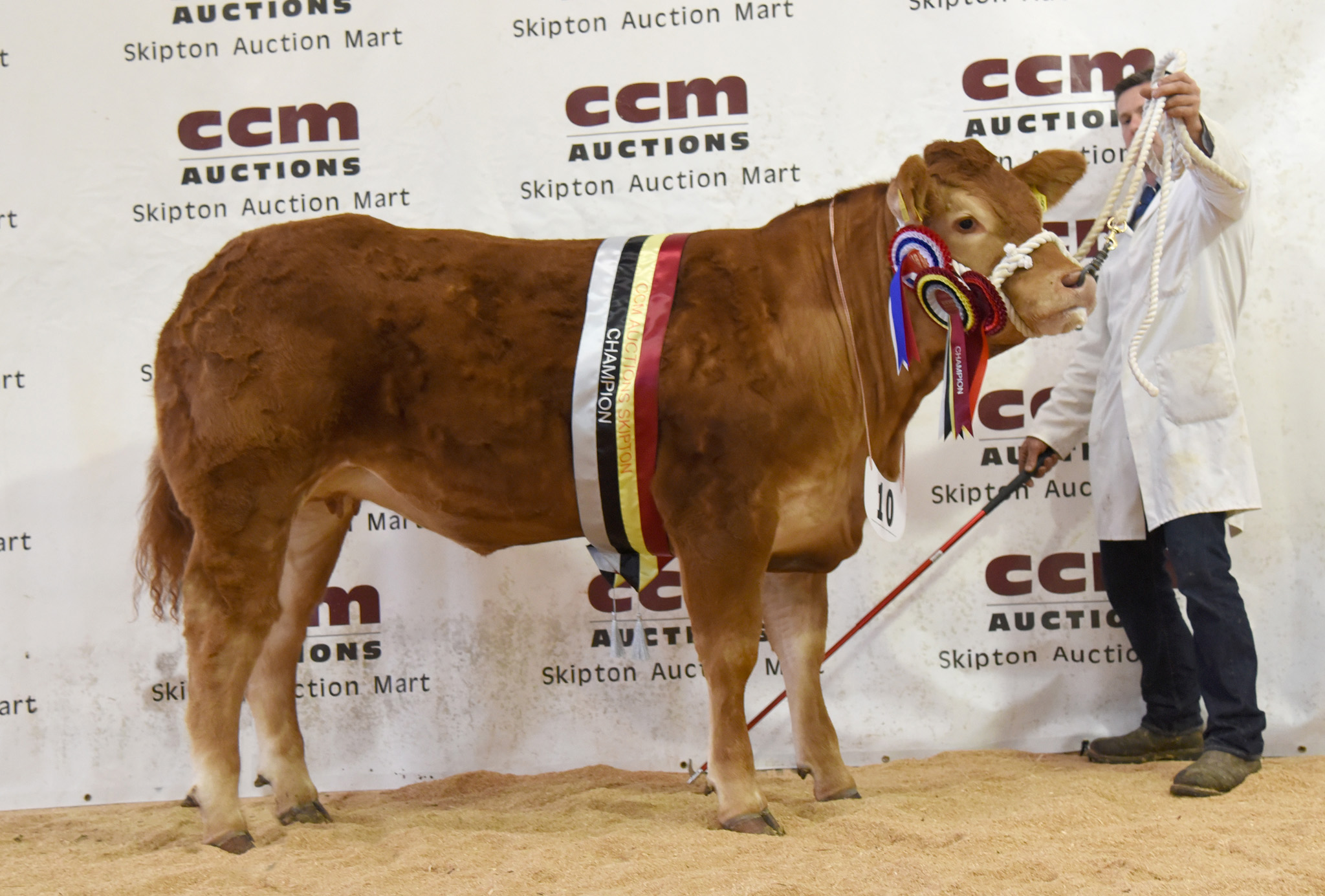 A brother and sister from Garrowby Farms, which forms part of the Garrowby Estate at the foot of the Yorkshire Wolds east of York, secured a pedigree championship double for breeder Clive Rowland at the 2018 Northern Limousin Extravaganza (NLE), the opening day of Skipton Auction Mart’s annual two-day breed showcase on Tuesday 8th May.

The young, up-and-coming duo, born within two days of each other in March last year and the only two entries from Garrowby Farms at the early season breed highlight, were both by the Irish AI bull, Lynderg Hero.

The heifer, Garrowby Nymph, out of the Plumtree Fantastic daughter, Gunnerfleet Ilocks, bred by the Handley family in North Craven, first won her class, before progressing to first become Female Champion, Pedigree Champion and then Overall Supreme Champion. She really caught the eye of show judge Andrew Ewing, who runs the Fairywater pedigree Limousin herd in Dumfriesshire, and noted: “She was an easy winner. In fact, she could have won any show in the UK with her lovely temperament showing all the qualities of the Limousin with style.”

Mr Rowland said his two frontrunners – they also came together to land the pedigree pairs show class – might well be paraded on the show circuit this summer, with the heifer then likely to be used for crossing later in the year and the bull put to work on Blue-cross cows.

The judge nominated his commercial champion, a January, 2017, Limousin-sired heifer from Gordon and Julie Sedgewick, of Ricknall Grange, Aycliffe, near Darlington, as his NLE Overall Reserve Champion. The home-bred Luna, by Confluence Fadell, a 4,500gns acquisition by the Sedgewicks, out of a British Blue-cross-Limousin cow, had already shone in the show arena as a ‘baby,’ winning her show class at Peterborough last year and finishing runner-up to the champion at Agri Expo. The Sedgewicks currently run 80 commercial cows, which are all put to Limousin bulls.

“The reserve supreme had all meat in the right place for today’s market – just what retail butchers are looking for,” said Mr Ewing.

The NLE continues to grow in stature as an ideal stage for providing valuable first-time experience in the show arena for Limousin youngsters and once again the majority of the 2017-born entries were making their debut, with show classes split into different age groups.

James and Sarah Cooper, the 2017 title winners, who run the Tomschoice pedigree herd at Hill Top Farm, Dacre, Harrogate, were once again to the fore with a hat-trick of class wins and a brace of Reserve Championships. The first came in the opening heifer show class with Tomschoice Nymph, a January-born daughter of Grand Duc, out of a Brontemoor Aceofspades-sired cow, Tomschoice Desire, and also tapped out as Reserve Pedigree Female Champion.

The Coopers picked up two red rosettes in the pedigree bull show classes, the first with their January-born Tomschoice Navarino, by Kaprico Eravelle, who was also responsible for their 2017 Reserve Male Champion Mozart, later sold for 9,000gns, out of a Haltcliffe Vermount daughter. This was the couple’s 2018 Pedigree Bull Reserve Champion, while their third first prize success was with the April, 2017, bull Tomschoice Note, a Netherall Jupiter son, out of the Ronick Hawk daughter, Tomschoice Duet.

Back with the girls, familiar faces from Cumbria, the three-generation Priestley family, Michael, his son Steven, wife Ruth and their children, Richard and Sarah, who run the Brontemoor herd at Cracrop Farm, Kirkcambeck, near Brampton, picked up another red rosette at the annual showcase with their April-born heifer, Brontemoor Neon. She is a daughter of the Welsh-bred AI sire, Powerhouse Elite, out of Airedale Indigo, a product of Richard’s own herd.

The Reserve Commercial Championship was awarded to the first prize July-born Limousin-sired heifer from Rachel Mudd and Craig Bentley, who run a dairy herd at The Gables, Kepwick, near Thirsk. Their first-time shown Imogen, expertly handled by their ten-year-old son Matthew, who was also among the prizes last year, is a daughter of Lodge Hamlet, acquired as a calf from Northumberland breeders, Malcolm Telfer and Helen Claxton, out of a pure British Blue cow.

The final red rosette in the Limousin-sired commercial bullock show class fell to Dave Hall and Rebecca Richardson, who farm in partnership at Laurel Farm, Rillington Fields, Scaggelthorpe, near Malton. Their January-born son of Plumtree Fantastic, known at home as Jackpot and out of a Limousin-cross cow, was bought last year from the Marston family in Kirkby Stephen, and had already experienced success in the show arena as a calf when winning its class at the East of England Show last year.

The annual show-only fixture attracted a 74 head entry and offered £1,500 in prize money. It was again supported by the North East Limousin Breeders Club, who presented a new silver salver to the supreme champion, with multiple sponsors, including the NFU branch in Skipton, also offering support.