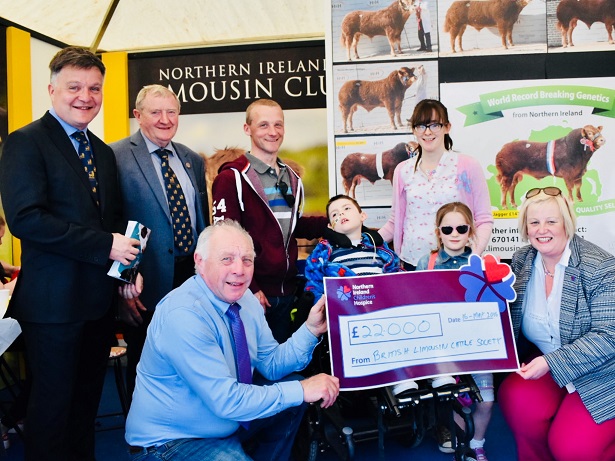 After hearing the story of Graham and Joanne McFarland the Northern Ireland Limousin Club leapt into action with a plan to raise funds for the NI Children’s Hospice who has supported the family in recent months. Graham’s brother Howard runs the Rahoney Limousin herd in Trillick, Co Tyrone.

At the outset, they couldn’t have imagined that the plan would lead to a record price for a Limousin embryo when on Saturday 5th May the hammer at Borderway Mart, Carlisle went down at 8000gns. The grade A embryo, donated to the fundraising effort by Robert and Jean Graham who run the Grahams Limousin herd at Bridge Of Allen, Stirling, is the only embryo ever to have been offered for sale from the mating of Grahams Coffee and Claragh Franco. This mating needed no introduction to the ringside audience; the successful combination has already produced show winners and sale toppers. A total of five cattle this way bred have grossed 146,500gns, including Grahams Lorenzo at 40,000gns, Grahams Natalie 38,000gns, Grahams Lily 32,000gns, Grahams Nashville 20,000gns and Grahams Lillie 16,500gns. The undisclosed buyer managed to secure the best of breeding right from the heart of the Grahams herd.

In addition to the embryo from the Grahams, others were donated by AW Jenkinson, Whinfellpark herd, Penrith, Cumbria and Henry Savage and Sons who run the Trueman Limousin herd at Newry, Co Down, Northern Ireland.

The fundraising really captured the heart of British Limousin Cattle Society members and many other breeders and businesses donated goods and services to a charity auction held at Ballymena Market on Monday 7th May ahead of the NI Limousin Breeders Club annual spring sale. With his tenacious approach, David Hamill, who runs the Cloverdale Herd in Dunmurray, secured some great lots, other embryos, semen straws, a calf crush, a heifer, a ewe with her lamb at foot and even a toy tractor. The Judge at the pre-sale show, Blair Duffton from Aberdeenshire, Scotland went home with a new wheelbarrow, spade, shovel and compost!

The combined effort, which includes a JustGiving page, has raised £22,000 to date. The family are humbled by the generosity of Society members, not only by the outstanding donations but also from the willing purchasers and those who gave up their time in the planning and preparation of the fundraising events. Joanne and Graham McFarland said “The entire family circle are totally amazed by the kindness and generosity shown by so many at the Auctions held at Carlisle and Ballymena in support of the NI Children’s Hospice, we deeply appreciate the support received from The British Limousin Cattle Society and its members” they added “Donations have been received from family, friends, neighbours, local businesses and strangers from wide and far and we are very thankful to everyone who has given something. Please keep Andrew in your thoughts and prayers”. 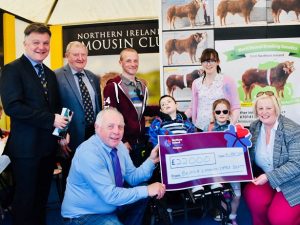 The NI Club welcomed Heather Weir, NI Hospice Chief Executive to their stand at the recent Balmoral Show where a presentation was made. She said “I am absolutely delighted that The British Limousin Cattle Society has raised this amazing sum of money for Northern Ireland Children’s Hospice. The funds raised from the auction will help us to open our sixth Hospice bed, making a real and immediate difference to local infants and children living with life-limiting and life-threatening conditions” she went onto say “It is only through the support and generosity of local communities, businesses, foundations and statutory partners that enable us to continue to care for over 300 life-limited infants and children each year”.

British Limousin Cattle Society Honorary president David Thomlinson said “It is amazing what our members have achieved in coming together for this worthwhile cause, what a generous community of breeders we have. While thanks are extended to everyone involved, I must pay particular gratitude to Robert and Jean Graham for the donation of such a special embryo. In setting a new record price it demonstrates just how keen breeders were to get their hands on such fantastic genetics”