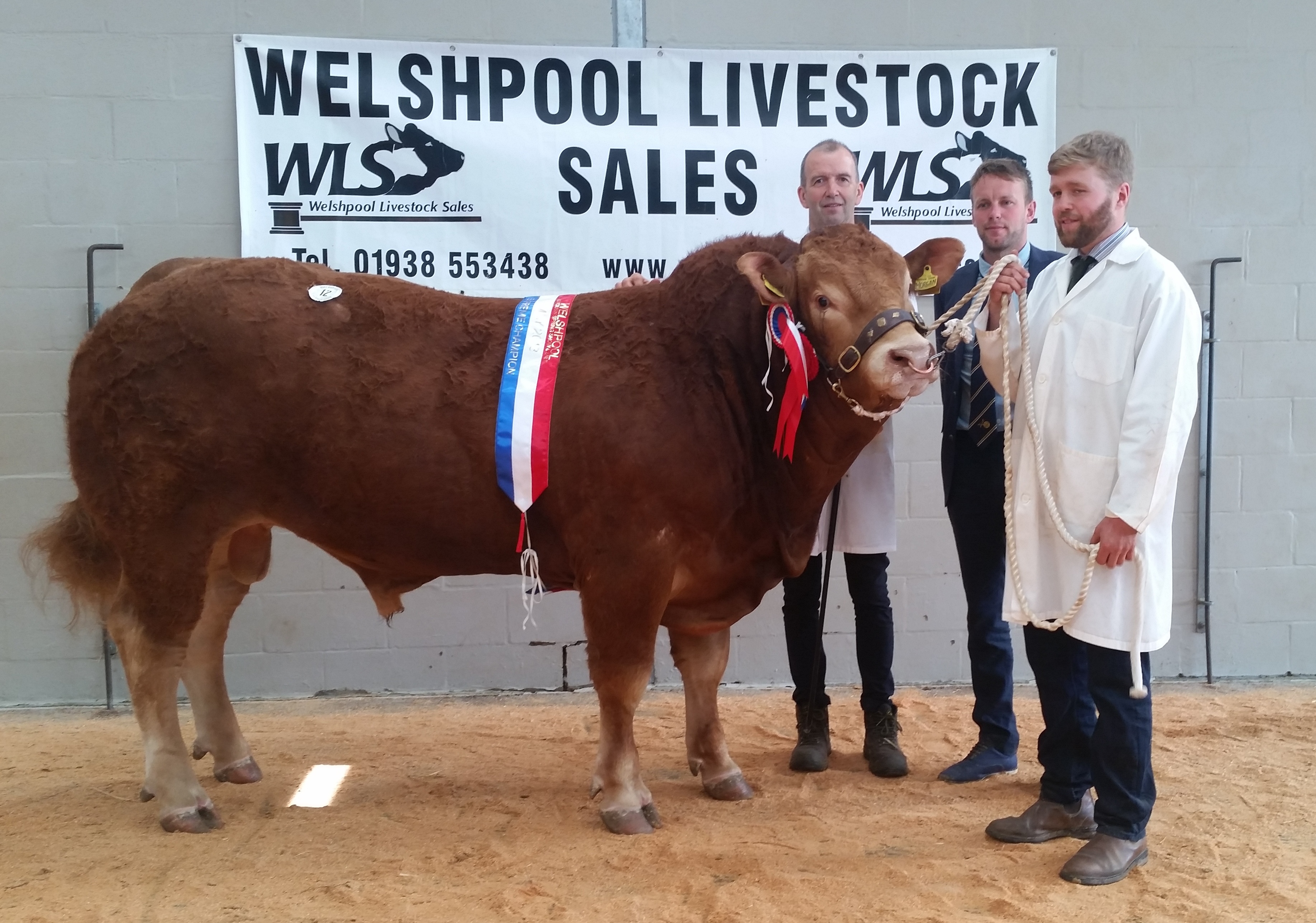 Topping the sale at the North West Midlands & North Wales Limousin Club spring show and sale at Welshpool mart on Thursday 17th May at 7800gns was Esmors Black Minnow from D E Evans, Mold, Flintshire. The September 2016 born black-coated natural calf, a twin to another male, is by Knock Glencoe, Male Champion at the Royal Welsh Show back in 2013 and out of Knock Fanfare. Black Minnow, a class winner in the pre-sale show judged by Mr G Roberts of the Myfyrian herd, Gaerwen, Anglesey, was bought by M Sailsbury, Ashers farm, Hayfield, Highpeak.

Next best at 6200gns was the Supreme Champion in the shape of Dyfri Morgan from D G & M J Edwards, Llandovery, Carmarthenshire. By the well-known Fenomen and out of the Wilodge Cerberus daughter Dyfir Hermine the July 2016 born bull was knocked down to Red House Farm, Newton, Powys.

Not far behind at 5600gns was the Reserve Supreme Champion Pabo Maximus from W P Hughes & Sons, Rhosgoch, Anglesey. Also born July 2016, Maximus is by Foxhillfarm Impecabull and out of Pabo Greta. Impecabull was Overall Champion at Carlisle in May 2014 and has a strong breeding line, being a Vantastic son, out of the 15,000gns Bankdale Alice. Maximus was purchased by A Rees & Sons, Llanfair, Welshpool.

At 5400gns came a class winner, and last bull in the ring, Underwood Navigator from I & W Jones, Builth Wells, Powys. The youngest bull in the sale, Navigator was born March 2017 and is by Ballinloan Jaegerbomb and out of Underwood Ebony. He was purchased by A & A Williams, Corwen, Denbighshire.

A brace of bulls made 5300gns, the first in the shape of Twemlows McCormick from Will and Jackie Forrester, Whitchurch, Shropshire. The September 2016 born bull is by Ampertaine Gigolo, sire of the world record 147000gns Trueman Jagger, and out of Twemlows Finegem. He was knocked down to B M Evans, Betws Y Coed, Gwynedd.

Next at this price came later in the sale, another from the Hughes family, Pabo Nempire. The 16-month old natural calf is by the renowned Objat son Llowerfrydd Empire and out of Pabo Hufen, a Wilodge Tonka daughter. Nempire made his way over the border into England with H J Marsh & Sons, Craven Arms, Shropshire. The preceding lot to Nempire, also from the Hughes family, was Pabo Norman who realised 5200gns in selling to R Hughes, Gaerwen, Anglesey. This January born Norman Harvest son, who stood second in his class in the pre-sale show is out of Pabo Ganor.