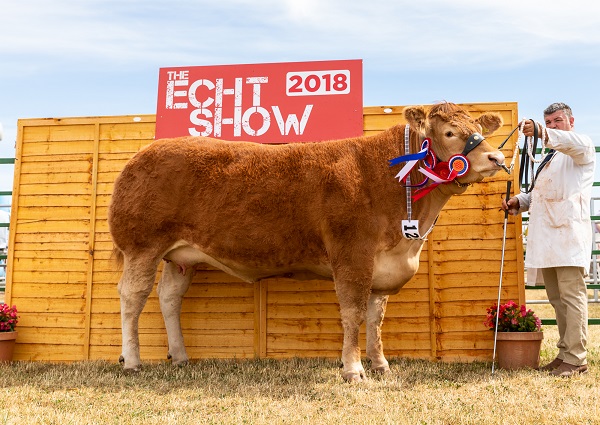 The sixth Scottish Limousin Grand Prix was held at Echt Show on the 14 July 2018. Attracting the cream of Limousin breeding from Scotland, and the north of England, the popularity of this fast establishing annual event continues to grow. Limousin entries at the show were significantly up on the year with 56 entered for the Grand Prix, which was judged by the well-known stockman Brian Wills of Tannadice, Forfar.

As exhibitors and showgoers enjoyed glorious sunshine Mr Wills’ selected the much admired three year old cow Brockhurst Lucy from W J and M Mash, Torrington Farms, Chesham, Buckinghamshire as his Supreme Overall Champion. He had already tapped her out as his Senior Champion earlier in the judging. A Wilodge Vantastic daughter out of the infamous show and breeding cow Brockhurst Bolshoi she was shown with her heifer calf at foot Brockhurst Oriana. By Hafodlas Domino, Oriana herself went onto be crowned Interbreed Champion Calf. Brought into the ring by Dougie McBeath and Sarah-Jane Jessop of Lower Greenyards Farm, Stirling where she is liveried, Lucy, came to the Echt Show having won her class at the recent Royal Highland Show, standing second in her class at the Great Yorkshire Show and as Reserve Female Champion at the Hertfordshire County Show earlier in the year.

Confirming a fantastic day for the Mash team, Lucy followed through by winning the Echt Show Individual Interbreed Championship and then the show’s prestigious Champion of Champions title.

It turned out to be a fantastic day for Dougie McBeath and Sarah-Jane Jessop, who run the Springsett Limousin herd at Bannockburn, Stirling, standing Reserve Supreme Champion, Reserve Senior Champion and Senior Male Champion was their own Woodroad James. No stranger to success at the Scottish Grand Prix, this is the second year he is making the headlines having been tapped out as Male Champion last year. An Irish bred bull by the Sympa son Woodroad Harvey and out of Woodroad Heather he was purchased at Roscrea sale in October 2015 and came to Echt on the back of success at the Great Yorkshire Show having been a part of the winning Interbreed Senior Group Limousin team.

The McBeath and Jessop team have been a strong supporter of all of the six Scottish Grand Prix’s todate and have won two Overall Supreme Championships including the inaugural staging of the event in 2013.

The Reserve Senior Male Champion came in the form of Rahoney Isaac, a March 2013 born bull owned by a UK and South African Consortium Meridian Genetics, but exhibited by Mr Harry Emslie, Kinknock, Peterhead. Sired by Haltcliffe Dancer out of the Tanat Mostyn sired cow Rahoney Velma, Isaac was bred by Northern Irish Limousin breeders H and D McFarland, Trillik, Co Tyrone. Isaac is another exhibit to come to Echt fresh from success on the show circuit this year already; he took the Reserve Champion rosette in the bull section of the Limousin judging at the Royal Highland Show.

Last year’s Grand Prix Supreme Champion Burnbank Jojo returned to feature as a prize-winner again, this year as she was tapped out as Reserve Senior Female Champion. From the Graham family, Dougie, Lynda, John and James, Mains of Burnbank, Blair Drummond, Jojo, a four-year-old cow by Wilodge Fastrac out of Burnbank Bindy is continuing to add to an already very successful show career. She teamed up with Foxhillfarm Jasper to take the Interbreed Pairs Championship at the Highland Show and was also in the Limousin team that secured the reserve spot in the Interbreed Team of Four Championship at Ingliston in June.

Taking the Overall Junior Champion title was another from the Graham family, this time in the shape of the October 2016 born heifer Burnbank Martini. Home-bred, by Burnbank Gigolo out of Burnbank Eleanor she had first taken the Junior Female red rosette ahead of Springsett Maisie from Dougie McBeath and Sarah-Jane Jessop. Also born October 2016 Maisie, by the Reserve Supreme Champion Woodroad James and out of Springsett Gracious followed the Graham heifer to stand as Overall Reserve Junior Champion.

To top off a superb day the Champion Team of Three from the Limousin judging from Messrs Mash went onto take the Interbreed Team of Three Championship. Brockhurst Majesty and Brockhurst Jade teamed up with Lucy to strut their stuff as a well-balanced and impressive looking team. April 2016 born Majesty, the youngest in the team, is by Ardglasson Highlander and out Brockhurst Heavenly who was Interbreed Champion and Overall Champion Limousin at the Great Yorkshire Show back in 2016. Jade, born February 2014, also by the herd’s stock bull Hafodlas Domino is out of the French bred cow Evidence

The Reserve Interbreed title went to the leader from the cross cattle section, a 20-month old Limousin cross heifer named Shaniqua from Blair Duffton and Rebeca Stuart of Huntly and Insch. Bought at the Winter Fair in Lanark for £1,500 she was Interbreed Champion at Fettercairn, Reserve at Angus and second in her class at the Royal Highland Show.