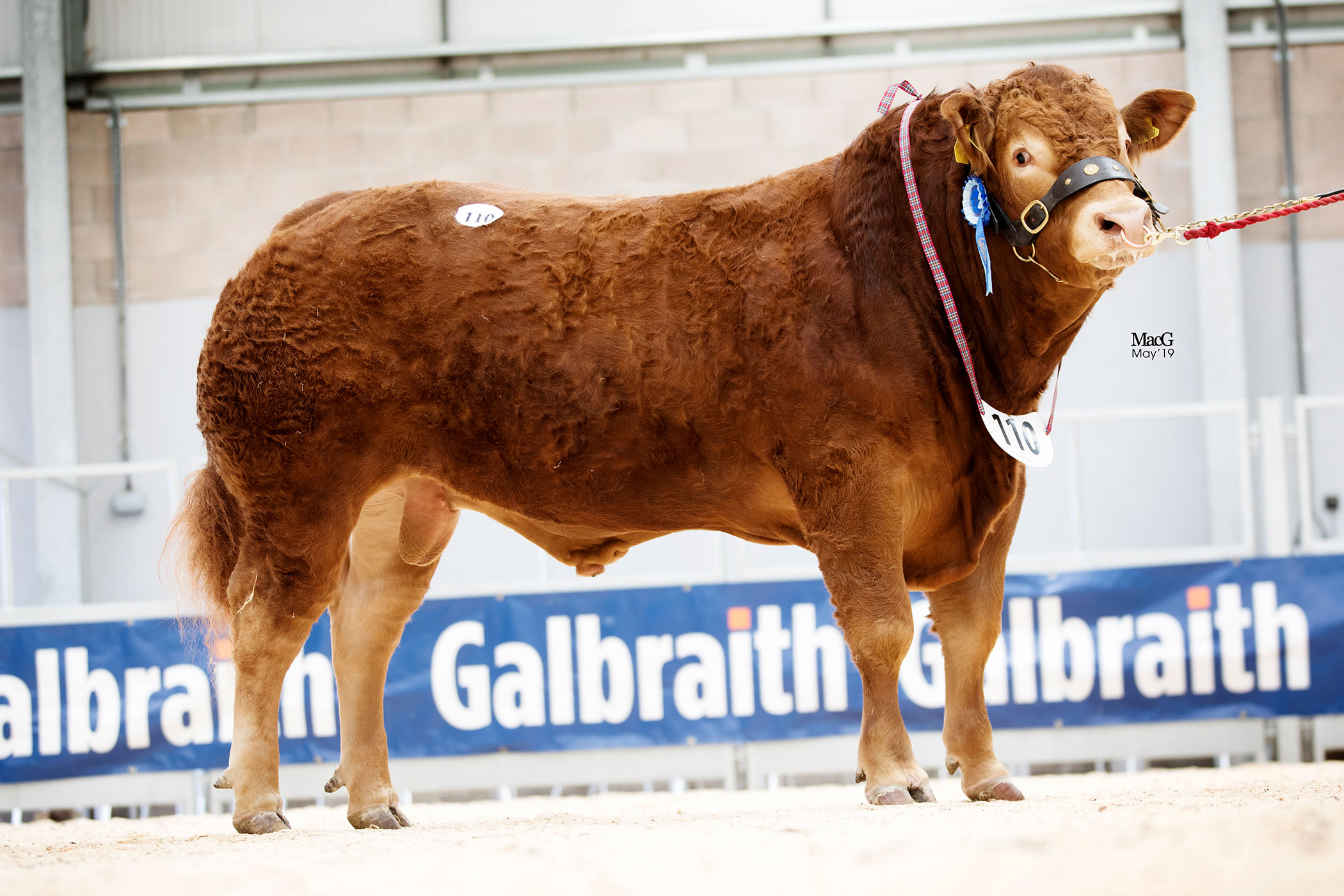 Spittalton Niagra from local breeder Andrew Burnett, Upper Spittalton Farm, Blair Drummond, made 9000gns to lead the Limousin trade and to take the top price, across all breeds, at United Auctions Stirling Bull Sales held on Monday 6th May.

Following hard on the heels of a successful sale at Carlisle two days previously, the demand for Limousin bulls continued at Stirling with 41 bulls sold to average £4474 and with a clearance rate of 89% of the 46 bulls offered.  Eleven bulls in all made 5000gns or more in a trade again dominated by commercial beef producers.

25th September 2017 born, Spittalton Niagra is by Dinmore Jeanpierre and is out of the Maraiscote Gigolo daughter Spittalton Jemma.  Earlier in the day in the pre-sale show, this bull had stood second in his class to the Reserve Supreme Champion, also a Spittalton bull, in front of the judge David Baillie Jnr from the well-known Calla herd at Carnwath, Lanark.  Come sale time some smart bidding saw the bull race to 9000gns before being knocked down to the 130-cow pedigree Shannas herd of John and Margaret Penny, Mintlaw, Peterhead, Lanarkshire.  Commenting on their purchase John Penny said: “This is an upstanding, long, clean bull with a very good top and he’ll be an outcross for the Shannas herd”.   The Spittalton herd has been a prolific seller at Stirling sales and Andrew Burnett was ‘delighted to see the bull go to a pedigree herd’.

The Reserve Overall Supreme Champion and first prize in the second class was another from Andrew Burnett in the shape of Spittalton Novak.  Again September born, and another by Dinmore Jeanpierre this bull is out of Spittalton Galaxy, a Lodge Equal daughter.  Purchasing the second top price, at 7200gns, was the commercial producer and noted Blackface sheep breeder W Dunlop & Sons, Elmscleugh, Innerwick, Dunbar, East Lothian. In a very good day’s trading the Spittalton herd sold six bulls in all to gross £36,435.

Selling at 7000gns was Dyke Nomad, the second prize bull in the third class, from Messrs JR MacGregor, Dyke Farm, Milton of Campsie, Glasgow.   October 2017 born this heifer’s calf is by Netherhall Gilbert out of the Dyke Gandalf sired Dyke Louise.  Gilbert himself has previously sold progeny for the herd up to 13,000gns.   With tremendous performance figures, and from a very easy calving line, Dyke Nomad was bought by Ian Proctor & Son, Glenlogie, Alford, Aberdeenshire.

Winning the first class of the day was Homebyres Norton who went on to make 6200gns for breeder Messrs J Logan, Humebyres, Kelso. Another bull with excellent performance figures, and carrying two copies of the F94L myostatin gene, this May 2017 born calf is by the homebred Homebyres Iveson and is out of Homebyres Implicity.  Off to the islands this Homebyres Norton was bought by J Budge, Kilmuir, Isle of Skye.

Two bulls made 5200gns.  The first of these was the black coated Newhouse Nightman.  December 2017 born Nightman is by Millington Ferrari and is out of Newhouse Hale.  Selling with strong calving figures, and a second prize bull, Newhouse Nightman was snapped up by Lour Farms, Forfar, Angus.

Winning the final class of the day and lifting the Supreme Overall Championship was Maraiscote Orson from regular Stirling consignors Mr J Nimmo, Bogside Farm, Newmains, Wishaw.  January 2018 born this calf is another by the herd’s prolific stock sire Goldies Comet and is out of Maraiscote Francis, a Normande Urquhart daughter. Commenting on his champion David Baillie said: “This is a stylish, correct young bull with a good top and very well suited for the commercial producer”. Taking the Champion home at 5200gns was A Jack, Snawdon Farm, Gifford, East Lothian.

Continuing from their strong sale at Carlisle two days earlier, the Goldies herd of Bruce Goldie, Townfoot, Mouswald, Dumfries made 5000gns when selling the October born, and first prize winner in the second class, Goldies Nougat.  By the AI sire Ampertaine Gigolo, and out of the Goldies Vitality daughter Goldies Flair, this bull was another heading to the Scottish Government Bull Stud.

The Cumbrian based herd of Messrs Jenkinson, Clifton Moor, Penrith, also made 5000gns when selling Whinfellpark Newt to W Steel & Co, Cumberhead, Lesmahagow, Lanark.  Another bull with good calving figures and two copies of the Fp4L myostatin gene, Whinfellpark Newt is by the Objat son Lowerffrydd Empire and is out of Whinfellpark Lilac a Gorrycam Hazzard daughter.

Another local breeder, Mr & Mrs R&J Graham, Airthrey Kerse Dairy Farm, Bridge of Allan made the same mark of 5000gns for their December 2017 born Grahams Nato.  This young bull is by the herd’s Irish bred stock bull Kilcor Iceman and is out of the French bred cow Galipette.  At the fall of the hammer this bull was knocked down to RG Youngson, Kinellar, Aberdeen.

The final bull to make 5000gns was Westhall Noah from M Fotheringham & H McNee, Over Finlarg Farm, Tealing, Dundee.  This calf is by the Sympa sired Romford Jura and is out of the Homebyres Vanhee daughter Westhall Isla.  December 2017 born Westhall Noah was bought by JC Kinnaird & Son, Haddington Est Lothian.

The Stirling sale saw a hectic round of three Limousin bull sales in seventy-two hours at Carlisle, Ballymena and Stirling sale centres where 184 Limousin bulls were sold to gross £948, 781 and with an overall clearance rate of 83%.