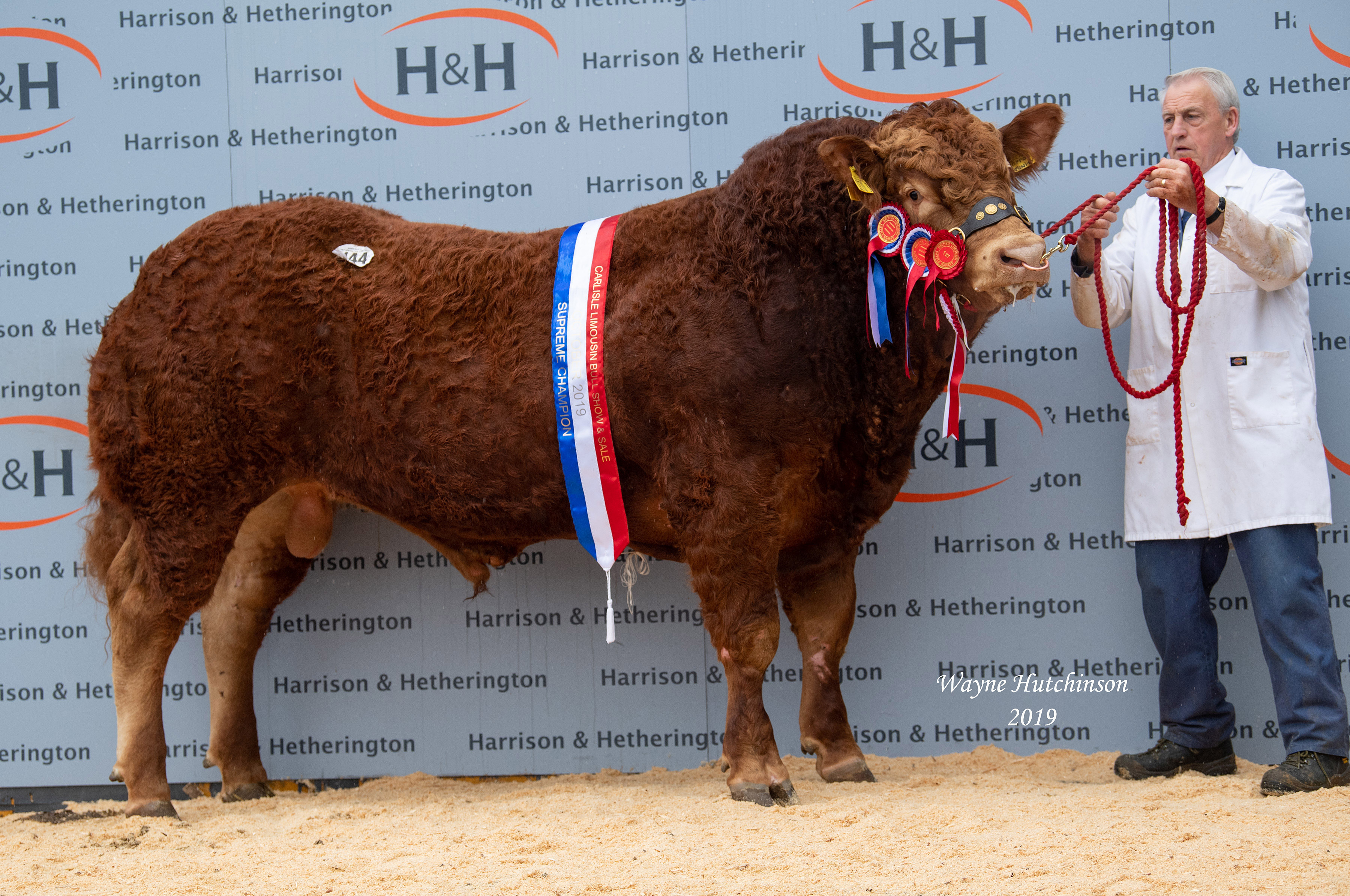 Representing his fourth overall championship at Carlisle, it was the Junior & Supreme Champion Ampertaine Opportunity from WJ & J McKay, Kilrea Road, Upperlands, Maghera which led the trade at 40,000gns when purchased jointly for three pedigree herds – Newhouse, Spittalton & Goldies. May 2018-born, Ampertaine Opportunity came with a wealth of homebreeding on both sides being by Ampertaine Gigolo, an Ampertaine Commander son, and out of Ampertaine Juliet, a muscly daughter of Ampertaine Elgin. This bull had ‘size, shape and good locomotion for such a powerful bull’ according to his purchasers. At the pre-sale show held on the Friday, judge John Lynch of Dovea Genetics, Republic of Ireland had put him up as his Overall Champion describing him as his ‘stand-out bull, functionally correct and with a super body and back end.’

Against the backdrop of continuing low industry prices for finished cattle and the uncertainty around Brexit, this was a pleasing result for the Limousin breed which has seen trade for Limousin stores this autumn remain pretty robust, and was reflected here with a decent demand for bulls with shape and performance heading to predominantly commercial buyers. Nine bulls made five figures with twenty bulls in the 5,000-8,000 bracket. More than 50 bulls sold between 2,000gns and 5,000gns with an excellent choice of stock sires for all budgets.

At 26,000gns was Foxhillfarm Ourbest by Foxhillfarm Lordofthering and out of Corranhill Krystal by the Sympa son Haltcliffe Dancer from Mr & Mrs M Alford, Wayside Farm, Blackborough, Cullompton, Devon. A first-prizewinning bull from the intermediate section and born in April 2018, he was purchased by Gordon Cameron, Newton Cottage, Acharrade, Argyll for his commercial herd.

Another red ticket winner from the same section was the 12,000gns Calogale Oxide from GJ Lee & CM Lloyd, Ger-Y-Coed, Four Roads, Kidwelly, Carms when knocked down to Donal Moloney, Roo West, Ardnacrusha, Republic of Ireland. An April 2018-born embryo calf, he is by Trueman Jagger and out of Calogale Lizzy and had stood Male Champion & Overall Reserve Champion at the 2019 Royal Welsh.

The fourth leading price of 11,500gns went to Ian Nimmo, Bogside Farm, Newmains, Wishaw for Maraiscote Oxford, a bull with Top 1% growth traits, who had stood second in his class to the Intermediate Champion. He is the first son offered at auction by the 50,000gns Bassingfield Machoman, and is out of the Goldies Comet daughter Maraiscote Holdon who had stood third in what was a very strong youngest heifer class at the 2013 Royal Highland. This bull was bought by commercial producer Neill & Partners, Upper Nisbet Farm, Jedburgh.

Two bulls made 11,000gns. Whinfellpark Oz from Messrs Jenkinson, Clifton Moor, Penrith sold to Thorndean Farms, Cowbeech, Hailsham, East Sussex. Another red rosette winner from the intermediate classes, and with a successful summer show season behind him, he is one of the first sons offered for sale by the herd’s stock bull Gunnerfleet Lion and is out of Whinfellpark Elite, by Wilodge Cerberus.

At the same figure was Brontemoor Oasis consigned by JM & SM Priestley, Cracrop Farm, Kirkcambreck, Brampton, Cumbria when knocked down to another commercial buyer R&J Johnston, Hewan, Shapinsay, Orkney. Having won the penultimate junior class, this June 2018-born youngster is an AI son of Uptonley Livingthedream and out of Brontemoor Juicycouture by Goldies Comet, and sold with a Beef Value in the top one percent.

Senior Champion & Reserve Overall was the 10,500gns Barrons Oslo brought out by Willie Barron, Morrow Edge Farm, Burnhope, Co Durham. Sired by the Lowerffrydd Empire son, Homebyres Jamie, and out of Barrons Icho (by Wilodge Cerberus) he heads to CV & E Lewis, Buttington, Welshpool for their Garyvaughan prefix. ‘A worthy winner in the senior section, this was a modern bull, very square with super plates,’ commented the judge.

From the same junior class as both the Junior Champion & Reserve came the 10,000gns Cairness Onside from William & David Moir, Home Farm, Cairness, Fraserburgh. Sired by the Wilodge Vantastic son, Goldies Goldfinger and out of Knock Ingrid, this black-coated bull sold to W Walker & Son, Camregan, Girvan, Ayrshire. Giving the same money were A Bunting & Son, Midtown Farm, New Abbey, Dumfries for McParlands Ozzy from MacParlim Genetics, Shaughan Road, Beleeks, Newry. Got by AI by Ampertaine Gigolo, this second prize winner is out of the Plumtree Deus daughter Dyfri Judith and had previously been Interbreed Champion at Newry Show.

A&J Gammie, Drumforber, Laurencekirk, Aberdeenshire sold their Senior Reserve Champion Westpit Oban for 9,000gns to N Pearson, Eldon Lane Farm, Peak Forrest, Buxton. By the Swarland Eddie son Jalex Itsallgood, bought privately after standing as Junior Champion at the 2014 Royal Highland Show, Oban is out of the homebred Westpit Harmony by the 20,000gns stock sire Netherhall Doubleoseven and out of Greenwell Diana, one of the herd’s foundation cows. Judge John Lynch described him as ‘long, stylish and very well-balanced.’

The other bull at 9,000gns was Steven Wilson’s Impulsive Orlando from his holding at Corby Hill, Carlisle. By Loosebeare Justin and out of Mullary Isabella by Plumtree Fantastic, this easy-calving April 2018-born bull was snapped up by DA Harrison, Hill House Farm, Aldoth, Wigton.

Making 8,200gns was Petteril Oz from Stephen & Ann Morley, Bankdale Farm, Wreay, Carlisle. Got by the AI sire Foxhillfarm Irishlad (by Guards Boomer) he is out of the Dolcorsllwyn Fabio daughter Petteril Lucy, a granddaughter of Bankdale Alice. Among other successes, Oz had stood Interbreed Beef Champion at this year’s Cumberland Show. Having been second in his class to the Senior Champion, he sold to C Fearon, Hollows Farm, Grange, Keswick.

J Leiper & Sons, Bank Top, Middleton, Morpeth took home the 8,000gns Reserve Junior Champion Loosebeare Owen who was a ‘clean, modern-type bull, not too extreme,’ according to the judge. By Ampertaine Jeronimo – whose first crop of calves have averaged £7,000 – and out of Loosebeare Ianna by Loosebeare Fantastic, he was sold by EW Quick & Sons from the 120-cow herd at Loosebeare Manor, Zeal Monachhorum, Crediton, Devon.

Another at 8,000gns was the well-muscled Intermediate Reserve Champion Maraiscote Olympus from Ian Nimmo. By the Bassingfield Machoman sire, a son of Millgate Fame, Olympus is out of the Virginia Andy-sired dam Maraiscote Intrigue and sold to the Ashledge Herd of AG Kirton & Sons, Severn Lodge Farm, Kinlet, Bewdley, Worcs.