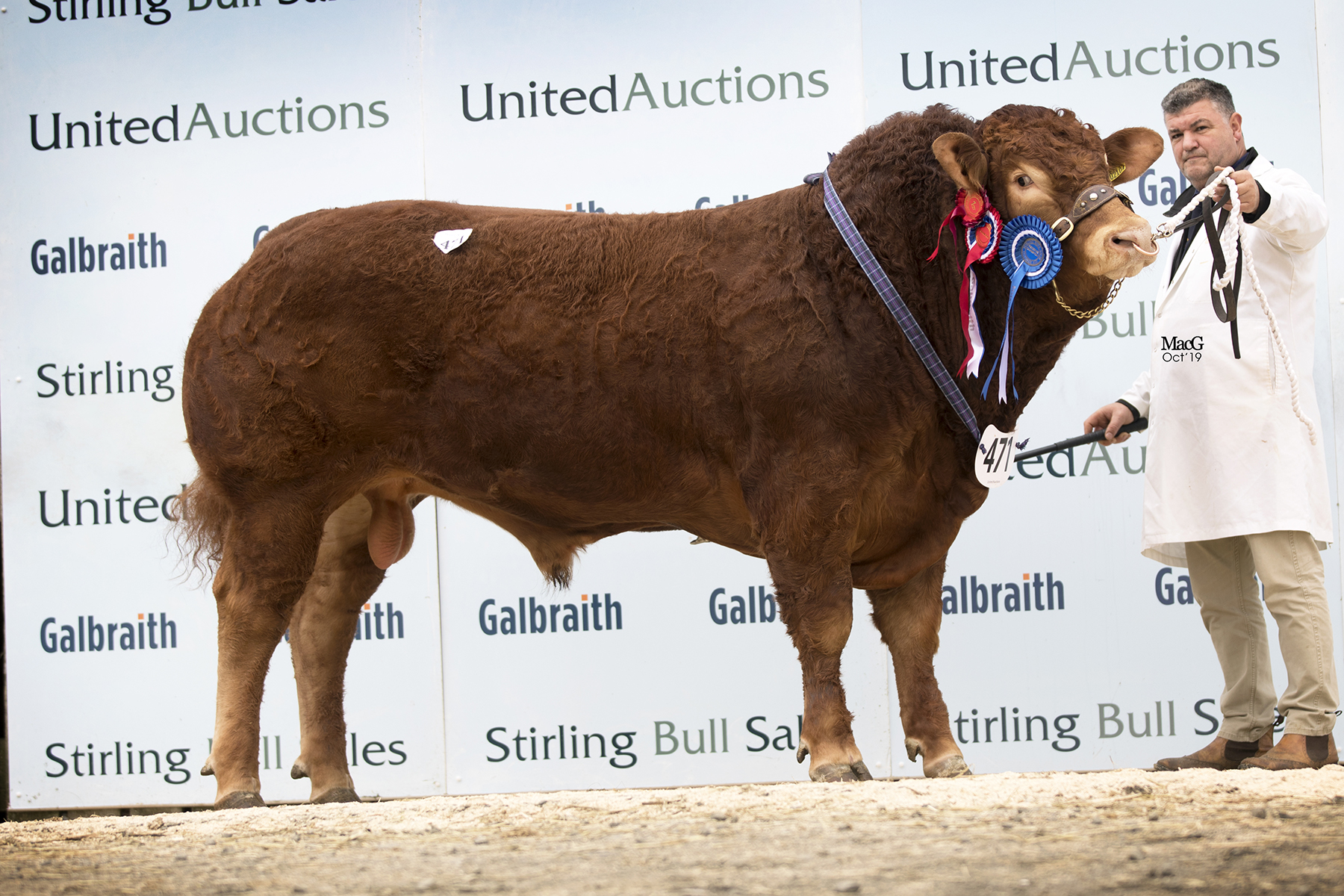 The British Limousin Cattle Society Autumn Bull Show & Sale held at Stirling on Monday 21 October 2019 peaked at 10,000gns for Ironstone Oliver consigned by D McBeath & S-J Jessop, Lower Greenyards Farm, Bannockburn, Stirling. By Ironstone Gandi and out of Brockhurst Batik, this March 2018-born bull sold to the Wilodge Herd, Shifnal, Shrops and had stood Overall Reserve Champion in the pre-sale show under judge Andrew Gammie of the Wespit Limousin herd who described him as ‘a good all-round bull, good on his legs and who showed himself well.’

Overall the trade was a solid commercial one with 45 bulls averaging £4,482, and was widely held as one of the strongest show of bulls in recent years at the October Stirling Sale.

At 9,000gns was Burnbank Ollymurs from D&L Graham, Mains of Burnbank Farm, Blairdrummond when going under the hammer to Messrs Glass & Smith, Mill of Fowlis, Muir of Fowlis, Alford, Aberdeen. By the Jacot son, Mereside Lorenzo, and out of a very good Lino cow, Burnbank Grace, this bull had stood Senior Champion coming from a class where Burnbank bulls took the top three places. The 100-cow Burnbank herd sold three further bulls at 5000gns, 3600gns and 3000gns.

A strong pen of bulls from R&K Davidson, Corsairtly Farm, Keith sold to a top of 8,000gns for Corsairtly Oswald to R Simpson & Son, Mains of Creuchies, Alyth, Perth. A first prize winner from the first senior class, this January 2018-born bull is a son of Ronick Inspector and out of the Goldies Dictator daughter, Corsairtly Janelle. The Davidsons sold three further bulls at 4000gns, 3600gns and 3000gns respectively.

Always good supporters of this sale, the Crofters Commission bought five bulls in total for their Bull Stud at Inverness. At 6,200gns was Spittalton Oxo from Mr J Burnett, Upper Spittalton Farm, Blairdrummond. Having stood Reserve Intermediate Champion, Oxo is by Dinmore Jeanpierre and out of Spittalton Loreen who goes back to Spittalton Bracken, dam of the 65,000gns Aultside Meanmachine. Other bulls heading to Inverness were Spittalton Operator and Burnbank Ojay – both at 5,000gns with others at 3,600gns and 3,200gns.

Andrew Burnett sold six bulls in all from his 90-cow Spittalton Herd to an average of £5,162. His second bull at 6,200gns was Spittalton Outlaw by Burnbank Judge and out of Spittalton Corrie (by Orme B) when going under the hammer to A Sime & Son, Bruceland, Elgin, Moray. Spittalton Osborn the Reserve Junior Champion by the 16,000gns Dinmore Jeanpierre and out of the Haltcliffe Vermount daughter Spittalton Lapple made 5,200gns to JM Fraser, Easter Clune of Lethen, Nairn. The same sire had topped the trade at this year’s May Sale at Stirling with sons at 9,000gns and 7,800gns.

The red rosette-winning Elrick Osprey from Michael Massie, Mains of Elrick, Auchnagatt, Ellon made 6,200gns and was purchased by Robert McNee Ltd, Over Finlarg, Tealing, Dundee. By the Wilodge Cerberus son, Rahoney Geoffrey, and out of Elrick Fandango (by Wilodge Vantastic) this embryo calf was born in April 2018.

Ian Nimmo, Bogside Farm, Newmains, Wishaw sold bulls at 5,800gns and 5,000gns. Reaching the 5,800gns mark was Maraiscote Ozone by the Queenshead Altea son Rutland Jetset and out of Maraiscote Jewel when knocked down to G&M Porter, Carrabus Farm, Bridgend, Isle of Islay. At 5,000gns and by the same sire was Maraiscote Ovid who was out of Maraiscote Jeri (by Greenhill Gonzales). April 2018-born, he heads to McDiarmid Bros, Benlawers Farm, Lawers, Aberfeldy.