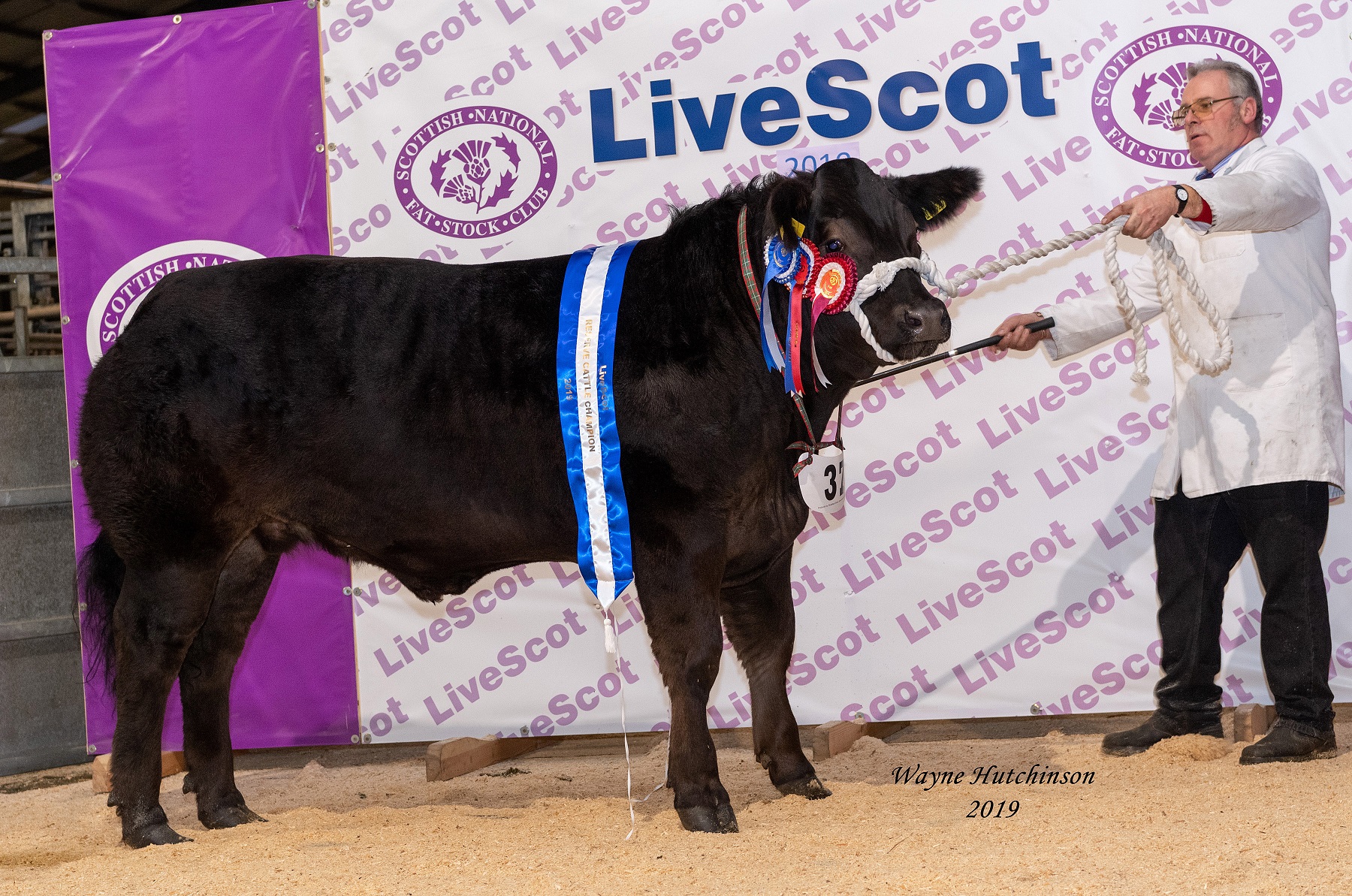 Exhibitors of Limousin-sired cattle put on a strong show at LiveScot on Saturday, 23 November.

Just pipped to the post for the Supreme Champion honours, taking the Reserve Overall title was Wilson Peters’ Reserve Bullock, Mr Boombastic, a 20-month-old home-bred entry which picked up a number of red tickets on the summer show circuit but was ultimately aimed for the Scottish National Fat Stock Club event. His sire is the privately purchased Limousin bull, Andside Hawkeye, while his dam is a Limousin cross cow. Mr Boombastic later went under the hammer at £2500 selling to High Black Butchers, Lanark, having tipped the scales at 686kg.

“I was looking for an animal with style, panache, flash and most importantly, flesh,” said the judge, Dougie McBeath, of Lower Greenyards, Stirling, adding his top animals all displayed the characteristics he was looking for.

In the heifer section it was Stewart and Lynsey Bett’s Queen Bee which stood Heifer Champion. Bought privately at the Welsh Winter Fair last year, where she won the Calf Championship, this 18-month-old has since claimed the Scottish Champion of Champions ticket at Keith Show as well as championship tickets on the Central Scotland circuit, including Stirling, Gargunnock and Drymen. Bred by Llyr Hughes, Fferam Gyd, her pedigree features Derryguillinane Kingbull on to a Limousin cross cow.

The second prize heifer from the same class, Messrs Renton and Redden’s Havana was Reserve Heifer. Brought out by Alasdair Cormack and bought from Messrs Telfer, Newton High House, when she stood champion at the September suckled calf show and sale at Carlisle last year, she is by Mereside Godolphin and out of a British Blue. The two-year-old was Heifer Champion and Reserve Commercial at both Northumberland and Haddington shows.

Also surpassing the £2000 mark at the auction was Archie and John MacGregor’s Scappa Flo, which sold to Kitson Butchers, North Yorkshire, for £2333.12 at a weight of 634kg. Bred by Liam Muir, Upper Onston, this 20-month-old Powerhouse Italic daughter stood first in the mediumweight heifer class before selling.

In the commercial calf section it was Neil Slack’s March-born Tokyo which picked up the Supreme Championship as well as the award for best bred by exhibitor. Sired by Lodge Hamlet and out of Sassy’s Lassie, a former show heifer and half-sister to Rio which stood reserve in this section three years ago, Tokyo was first at Stokesleigh Show and third at the Agri-Expo.

“She was a very correct heifer with lovely style and a lot of potential for the future,” said the judge of the calf section, Craig Robertson, from Newton of Logierait, Pitlochry.