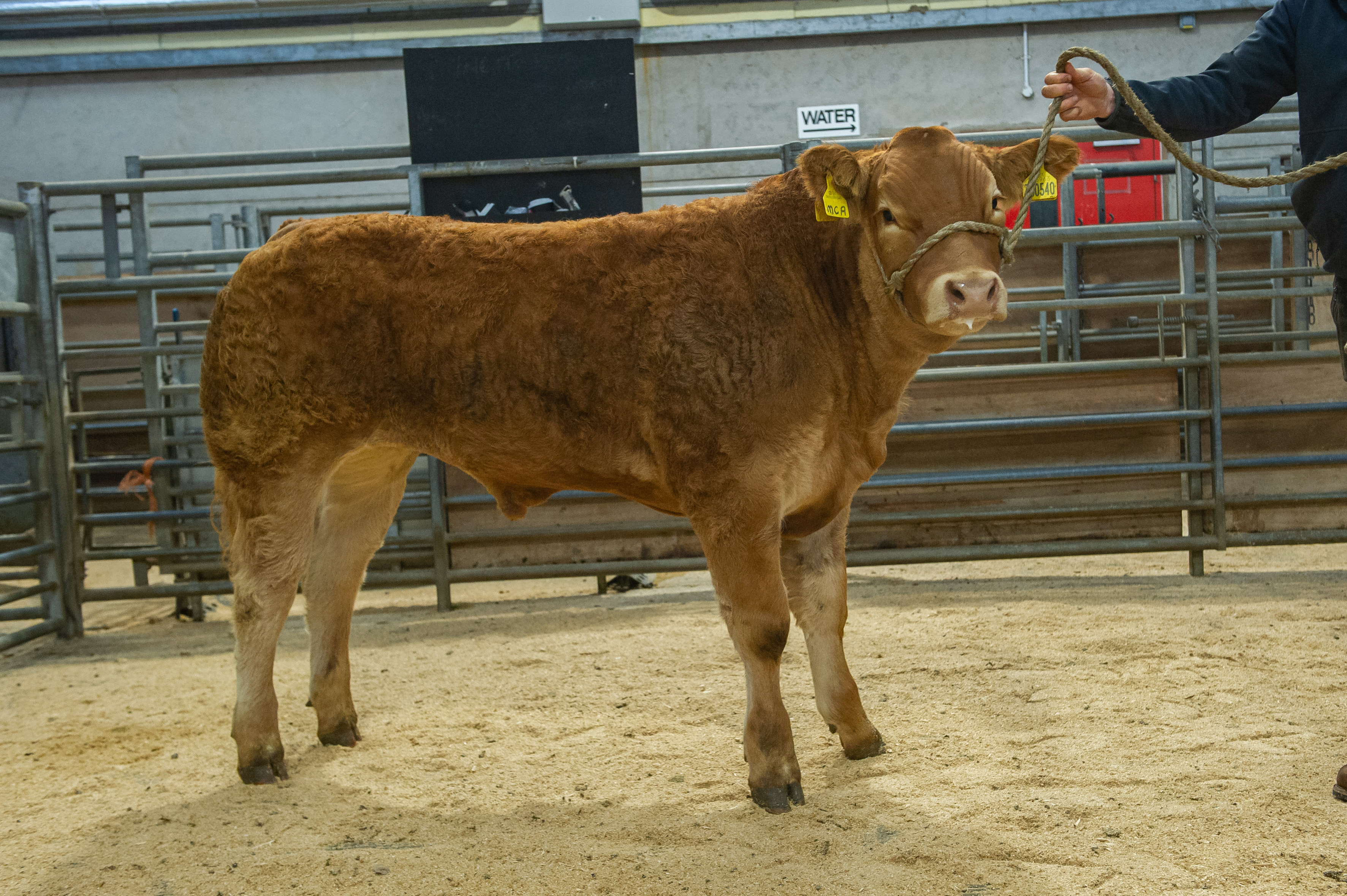 When using Limousin, the returns are sweet, here the proof is in the pudding. At the BLCS sponsored Hexham & Northern Mart sale on Friday 15th October, the trade showed that Limousin breeding is the smart choice!

Prior to the sale the show, for unhaltered cattle only was conducted under strict Covid-19 guidelines and expertly judged by Mr Ricky Alder, Ponteland. With classes solely for Limousin cross cattle the Thornton Family, Cornhills, Kirkwhelpington dominated the prizes for pens of four; scooping both the steer and heifer awards for two very well-bred and presented pens of black, seven-eighths bred cattle at 15 months of age. It was the heifer pen that Mr Alder favoured and awarded the Northern Limousin Cattle Breeders Trophy to The Thornton’s for the Championship pen of four.

With two very simple individual classes; one for steers, one for heifers the judge was presented with six male and eight female exhibits from noted producers from both Northumberland and County Durham and all fourteen of the cattle were of outstanding quality, worthy of any show ring at this traditional show-sale time of year.

Mr Alder worked swiftly and diligently to arrive at his prize lists for each class and then on to the culmination of the schedule; the Overall Championship and the George Stappard Memorial Trophy which he awarded to a tremendously correct red heifer at 14 months of age. The victory for renowned and highly regarded cattleman Mr Fred Murray, East Horton, Wooler, North Northumberland was extra-special in that, after a long and successful career breeding and showing cattle at both regional and national level, this heifer and the others sold with her was to be the last consigned for sale at Hexham Auction Mart by Fred who has decided to hang up his cattle clippers and retire – at the top! The heifer was one of a pair shown, the other a black example which had stood second in the class and both but especially the champion epitomised what only a lifetime of breeding and showing top quality cattle can result in. The sparky red female was a beacon of Continental cross-bred genetics and the pinnacle of commercial beef cattle for todays modern market place – in short a fantastic heifer with carcass and confirmation; shape and style; muscle and movement and the triumph a fitting end to a glittering career for Mr Murray.

The Reserve Championship was awarded to another very well-bred, well-presented example; a year old jet black bullock from annual consignor to this sale and likewise a well-respected cattleman based in County Durham Mr Michael Reed, West Biggens, Frosterley in Weardale. The bullock too exhibited all the desirable traits of the Limousin breed as the leading commercial sire of beef cattle in the country and stood a worthy reserve with Mr Alder leaning towards his favoured choice in the sale ring and his own finishing sheds; the heifer.

The auctioneers would like to extend their grateful thanks to all those who contributed to the show under difficult circumstances; all exhibitors, our judge and our generous sponsors without whom such spectacles could not take place.

With the formalities of the show taken care of the focus of the day shifted to the catalogue of 771 top quality Limousin cross cattle consigned by noted producers from Northumberland, County Durham & The Scottish Borders. No fewer than Sixty-One buyers were socially distanced round the ring at the start of the sale and keen to compete for the quality on offer and numbers swelled further as the day went on.

The first quarter of the catalogue consisted of cattle in the 18-24 month age bracket and these were considerably dearer than of late peaking at £1475 for a cracking pen of 5 Limmy bullocks like peas in a pod from Ian Scott and Sons, Corneyside, who followed these up with a pair of heifer sisters at £1450 which led towards the run of seven steers and five heifers averaging a whopping £1412 for the Matfen based family.

The bulk of the catalogue was however made up of three-quarter bred cattle in the 12-15 month age bracket with many noted producers selling runs of thirty to seventy head as they do on an annual basis.

The lead trade of the day had to be that attained by Fred Murray who, with a super pen of seven cattle including his rosette winners returned an average of exactly £1500 per head for two steers and five heifers at 14 months of age – a fitting end to a fabulous career. His show champion sold for a worthy £1640 selling to Messrs Thorpe, Hawes, North Yorkshire.

Many purchasers travel a distance to vie for some of the best cattle in the country offered at this sale and a number of our valued consignors reported lifts on last years trade well in excess of One hundred pounds per head, not least the aforementioned Thornton Family, Cornhills. Richard and son Christopher sold thumping bullocks to a top of £1490 and a sublime heifer to £1510 and reported a huge increase on the year to their obvious delight – their hard work of managing hybrid genetics paying dividends with an average of £1285 for 24 steers with 24 heifer sisters alongside.

Another significant lift was enjoyed by Messrs Lee, Agars Hill, Whitfield who saw steers at ten months to £1205 with heifers trumping their penmates at £1290, often the case nowadays and a super run of cattle from The Lees averaged £1068 for 30 steers and 16 heifers throughout.

The largest run of cattle on the day came from Hexhamshire locals Graham & daughter Gemma Common, Low Ardley who similarly reported a sizeable increase through the Hexham ring with steers to £1300 twice and a shapely heifer selling to £1250. The Commons enjoyed an average of £1042 for 34 steers and 31 heifers highlighting this centre as the leading outlet for both quality and quantity in this region.

A number of renowned County Durham cattle breeders sent consignments North to Hexham and were once again rewarded in style for their efforts, not least John, Andrew & Steven Reed of Lands Farm, Westgate in Weardale who sold late in the day but they too enjoyed a hefty rise on 2019 figures. Lands steers topped at a newsworthy £1450 with heifers peaking at £1175 at just 12 months of age with many return purchasers noted on the sale docket. The Reed family were yet more happy customers at Hexham reporting an increase of well over £100 per head with an average of £1086 for 25 steers and 19 heifers.

The Reserve Champion from Michael Reed, West Biggens, Frosterley sold at noon to return £1200 going home with Messrs Clark, Paxton Dene, Longhorsley whilst The Biggens heifers sold to £1165 with trademark shape and style thoughout his run of thirty-two averaging £1035.

With well-sold, quality consignments simply too numerous to mention in their entirety the furthest travelled lot would be that of brothers Tom & Blair Cockburn, Kingside, Peebles who brought their annual load to Hexham and once again savoured the journey with heifers peaking at £1290 and their best steer hitting £1135 contributing to an average for their seven sold of £1107 which would sweeten their considerable trek home over The Carter Bar.

Once again the auctioneers were delighted to be able to bring together the best of breeders from across the region with a staunch and steadfast ring of dedicated buyers; two distinct and essential groups of customers to which we thank for their continued custom in these trying times.

Thoughts now turn to next week and The ‘Bellingham’ spring born suckled calf sale and The ‘Tow Law’ show and sale which take place on Thursday 15th and Friday 16th respectively. Details of both are available from the auctioneers on 01434 605444.

Cattle 10 months and under