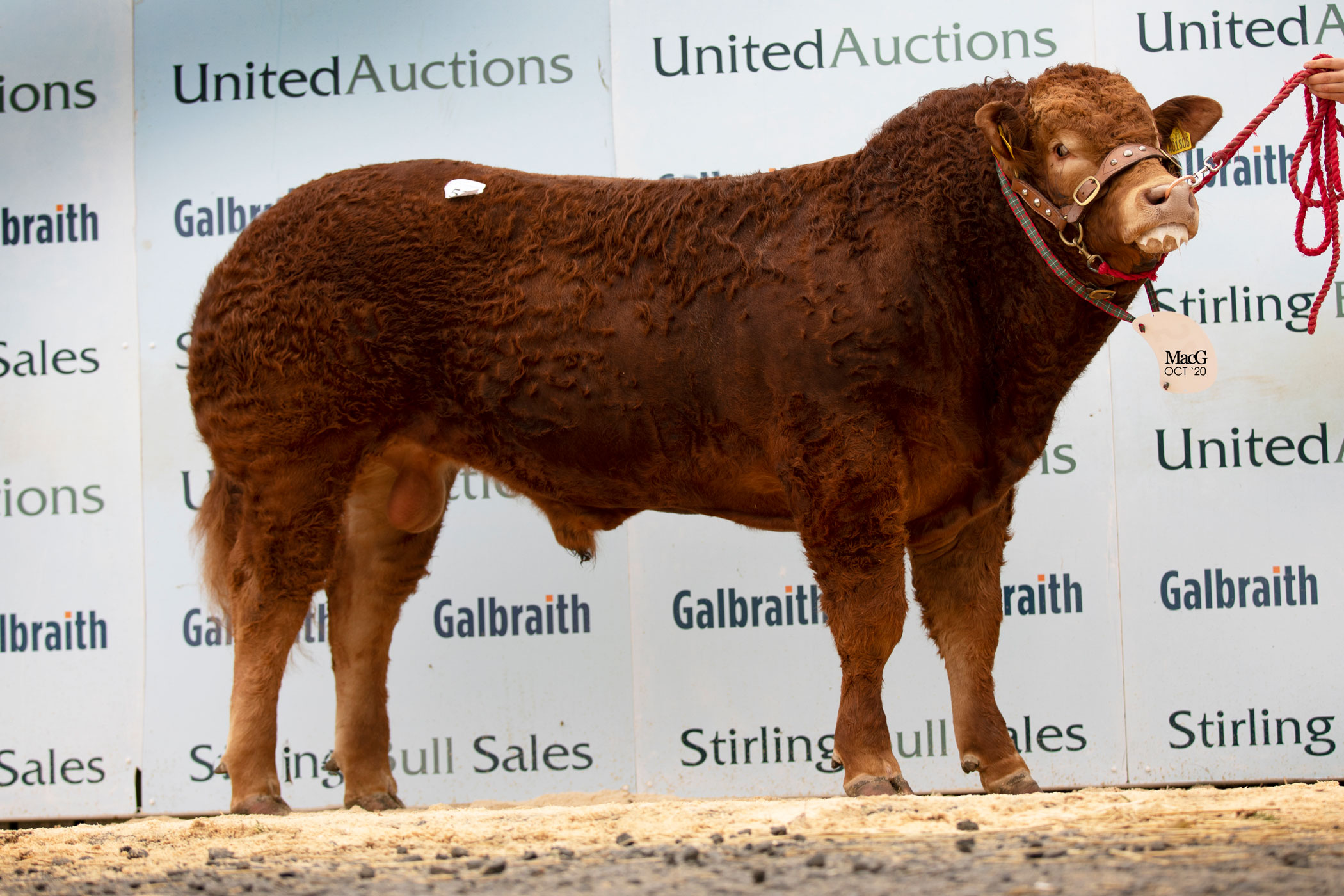 In a weekend of sound trading in tricky covid-related circumstances, demand for the Limousin breed has been underlined with just under 100 bulls sold into new pedigree and commercial homes.  Hot on the heels of a day at Carlisle on Saturday, Monday saw the British Limousin Society’s Autumn sale at Stirling where 33 of the 46 bulls forward headed to new herds, representing a clearance of 72% at a sale average of £4652, up £170 on the same sale last year.

Top price of the day was the long and clean Homebyres Potter. With a Beef Value of LM 41 – within the breed’s Top 10% for the production traits – he is a Fieldson Alfy son and sold at 9500gns to the pedigree and commercial home of Messrs J F & MB Teague, Buteland Farm, Balerno, Edinburgh.   Consigned by Mr A MacGregor’s Allanfauld herd, this was an April 2019 born calf purchased for 5000gns at foot with his dam – Homebyres Lollie – at the Homebyres dispersal sale of Messrs J Logan last November.

Having made the trip north from Wiltshire, new Society Chairman Harry Parker commented “The difficult trading conditions have possibly had their effect, but the trade today has been solid for a good strong show of Limousin bulls.  The averages at both this sale and Carlisle earlier in the week are both up on the year indicating the demand for the breed and the quality animals within it”

Next to hit the top spots was the February 2019 born Dyke Pacman, consigned by Messrs J R Macgregor, Milton of Campsie, this sold at 8200gns.   A strong, shapey bull out of a Netherhall Gilbert heifer, he was sired by the herd’s stock bull, Goldies Lordoftherings, who has already sold three bulls at Society sales to average 9500gns.   With a Beef Value in the top 10% of the breed, and easy calving genetics to the fore, this heads to the home of Messrs E & M Simpson, Whitehaugh Croft, Inverurie.

On the heels of Dyke Pacman was Homebyres Plumber, selling at 6000gns.  A May 2019 born calf, he was also bought from the Homebyres herd at foot with his dam, Homebyres Greedie.  Sired by the noted Wilodge Cerberus, with a Beef Value in the top 10% of the breed and a maternal weaning weight EBV in the top 1%, he was consigned by Mr A Campbell of the Strawfrank herd.  He sold at 6000gns to Mr A J Maclean, Heylipol, Tiree.

From Aberdeenshire, next came the March 2019 born Anside Pikachu from Mr and Mrs S Irvine.  Also by Wilodge Cerberus and out of the herd’s Shire Diana, he made 5500gns selling to the Scottish Government bull stud who purchased a number of bulls on the day to join their team of 70 Limousins.

A clutch of bulls then went on to make 5000gns.  The first of these was for the Dyke herd again, with Dyke Phantom.  A January 2019 born bull by the homebred Dyke Triumph out of a Claragh Franco-bred daughter, he sold to Mr T L Stirling, Auchterblair Farm, Carrbridge.   A few lots later, in what has been a weekend of great trade for the Nimmo family of the Maraiscote herd was Maraiscote Panama, a February 2019 born bull with a Beef Value in the Top 1% of the breed.  By the herd’s stock bull, the popular Bassingfield Machoman and out of a Goldies Comet daughter, he sold to Messrs GT & S Coghill, Muce, Orkney.    It was then the turn of the local herd of Messrs D&L Graham with Burnbank Performer.   By Mereside Lorenzo and out of a Buchaam Funambule daughter, he sold to DS Stark & Sons, South Ballo, Inchture.   The youngest to go in this group was Lomond Prince from Andrew Orr, Kinross.  April 2019 born, he is sired by the well known Whinfellpark Lomu out of a Wilodge Cerberus dam and heads to the home of Mr C Davies, Glenyfer, Pembrokeshire

Averages: £4652 for 33 bulls sold, an increase of £170 on the year
Auctioneers: United Auctions, Stirling

To view the video highlights click the link below