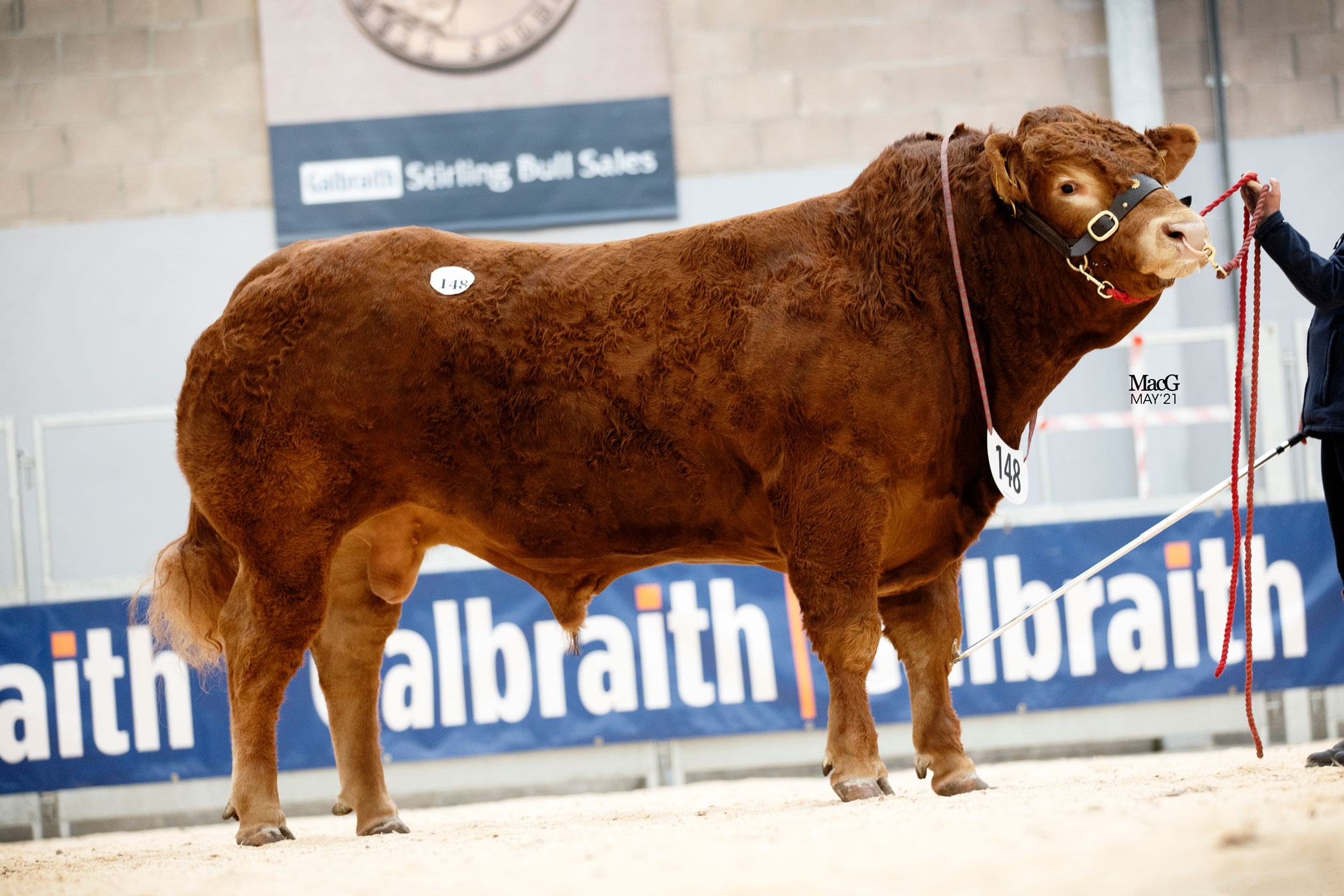 On Monday 3 February, a crowd of pedigree and commercial breeders made their way to Stirling Auction Centre, to the first May sale of the season. Bulls from 15 of the top herds across Scotland and the North of England came together to offer their stock under the hammer. Averaging £4,641, demand was strong with an increase of £186.02 on 2020.

The British Limousin Cattle Society Breed Secretary, Will Ketley commented “I would like to extend my thanks to the vendors for their continuous support to the sale and am looking forward to having a pre-sale show return back to Stirling in the autumn.  Appreciation must also go to the purchasers and under bidders.”

Topping the trade was Maraiscote Paragon, the first of two bulls brought forward from Mr J Nimmo, Bogside Farm, North Lanarkshire selling at 7,500gns. The June-2019 born bull was sired by Bassingfield Machoman and out of homebred cow, Jeanie. Paragon obtains two sets of the F94L myostatin gene and a beef value of 48. Snapped up by commercial buyers Messrs Steel, he heads home to Lesmahagow, Lanark.

Next in line at 6,800gns was Lomond President, from Mr A Orr, Lomondmuir Farm, Kinross. The July-2019 born embryo calf is sired by Cloughhead Empire and out of Lodge Femme. Displaying myostatin of F94L/NT821, he attracted commercial breeder T Howden, Stanley, Perth.

Hot on their heels at 6,500gns was Spittalton Poncho, brought forward by Mr J Burnett, Upper Spittalton Farm, Stirling. June-2019 born Poncho obtains two sets of the F94L profit gene and a beef value of 35. Sired by Burnbank Judge, a son of 14,000gns Burnbank Gigolo and out of homebred cow Lilary. Keen interest was fought off by Mr King, Thornton Hill, Glasgow for commercial use.

Also reaching 5,500gns was Messrs J R MacGregor, Dyke Farm, Glasgow, who offered Dyke Pirate under the hammer. This May-2019 born Netherall Gilbert son is out of homebred cow Maggie, a daughter of Fieldson Alfy, who sold for 37,000gns at the Carlisle October sale in 2006. Pirate holds two sets of the F94L myostatin gene and a beef value of 43. He was the first of two bulls purchased by the Scottish Government Bull Stud.

Next in the money at 5,200gns was Grahams Profuse from Airthrey Kerse Dairy Farm, Bridge Of Allan, Stirling. This August-2019 embryo calf is a son of 25,000gns Claragh Franco who was purchased by the herd from Carlisle May sale in 2011 and out of French-bred Cousne. He obtains two sets of the F94L myostatin gene  and a beef value of 40. He is a full brother to Grahams Nathan who sold for 11,000gns. Purchased by N Mcculloch, he heads South to Stranraer, Wigtownshire.

Also reaching 5,000gns was Strawfrank Pedro, brought forward by Mr A Campbell, Strawfrank Farm, Lanark. Sired by 50,000gns Wilodge Cerberus and out of Marlepark Celia who has a pedigree packed with French breeding. Pedro obtains two sets of the F94L myostatin gene. He heads over the water to the Isle of Skye with Mr A Macloed.

Again scoring 5,000gns is Teague Playboy from J F & M B Teague T/a Buteland Farm, Balerno, Edinburgh. Born in October-2019, he is a son of 9,000gns Ampertaine Monarch who the herd purchased in 2016 and is out of homebred cow Lucy. He obtains two sets of the F94L profit gene and a beef value of 35. He was purchased by Mr Hendry, Bannockburn to the Muir herd.

Other top prices include four bulls who achieved bids of 4,800gns. First inline was Grahams Preston, a November-2019 born son of the noted AI sire, Ampertaine Gigolo. He is out of homebred Lulu and has two copies of the F94L myostatin gene and a beef value of 43. Preston caught the eye of Mr A Rennie, and now calls West Lothian home.

Eagleside Postmalone from Mr T Illingworth was next to reach the 4,800gns mark. This October-2019 born calf holds myostatin of F94L/Q204X, a beef value of 48 and is a maternal brother to Eagleside Orinocco who sold for 9,000gns at Carlisle in 2019. Sired by Ampertaine Gigolo and out of Irish cow Hurricane Kayla. Postmalone heads North with J Don & Sons to Stonehaven, Kincardineshire.

Next in line was Windsole Poncho from Mr W Lawson, Windsole, Auchterarder, Perth and Kinross. Poncho obtains two copies of the F94L myostatin gene and is sired by the noted AI sire Lodge Hamlet and out of homebred cow Flora. This August-2019 born bull caught the eye of the Corrigall herd to Mr W S L Muir.

Next in line is the following lot, Maraiscote Pitcher from Mr J Nimmo, Bogside Farm. The September-2019 born son of the 23,000gns Goldies Comet and out of homebred cow Hilary. Pitcher carries two sets of the F94L myostatin gene and a beef value of 39. He is the second of two bulls who head to the Scottish Government Bull Stud.

Murray Rainnie who conducted the auction with United Auctions commented “Older bulls that were mature enough to go and run with batches of cows met a keen demand, whereas some of the younger bulls met a slightly more hesitant enquiry.”

Springsett Missy and Dinmore Ochre were brought forward from the Springsett herd from D McBeath & S J Jessop. Both sold for 2,600gns. Springsett Missy is a 2016-born cow by Woodroad James and out of Majestic Jewel. She had Ritzy, an October-2020 born Dinmore Immense sired heifer calf at foot. Dinmore Ochre, a March-2018 born Jaguarben daughter out of Dinmore Eclipse. She also had a February-2021 born heifer calf sired by Woodroad James. Both of these smart outfits were purchased by G M Morrison, Campbeltown, Argyll.

Video of the top prices –