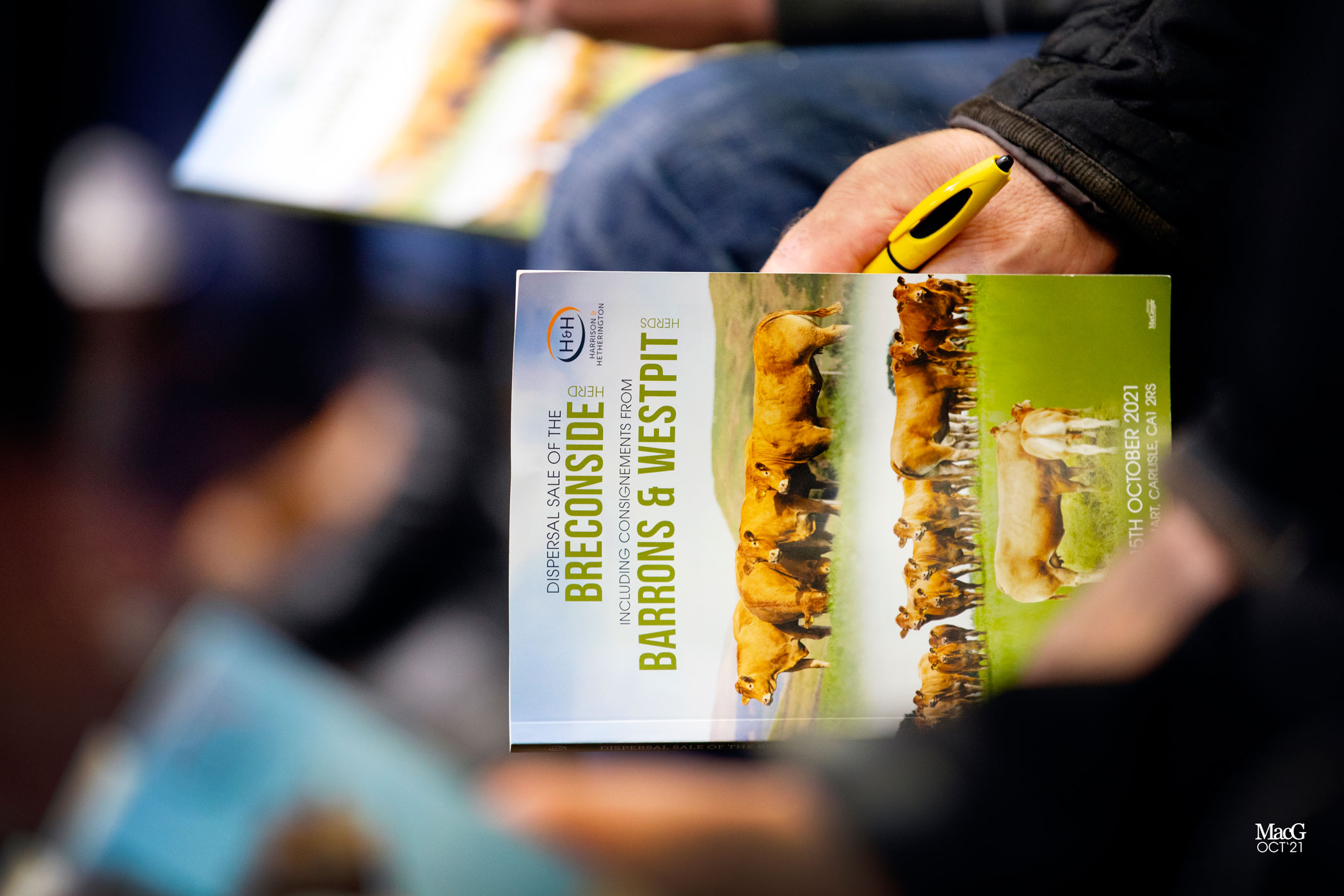 Friday 15th October saw a fierce trade at Borderway Mart at the Limousin Cattle Society October sale of females. The 87 females on offer drew a large crowd for the evening sale, which included the dispersal of the Breconside herd, a consignment offered from the Westpit herd and a presentation of all calved females from the Barrons herd. The sale saw a terrific trade, Breed Secretary, Will Ketley commented, “Sales like today reassure us of the confidence in Limousin females and alongside a consistent female sale in May, this solid trade is rewarding our breeders when they offer their quality stock for sale.”

James Little, auctioneer of the sale from Harrison and Hetherington, said “A large crowd of buyers from across the UK descended on Borderway. The quality of cattle ensured high interest on the internet, which transferred into the sale ring, where the trade exceeded the vendors expectations.”

The top price of the evening was from Peter and Merlin Dernie, Breconside Farming Partners, Moffat of the Breconside herd who were holding a dispersal sale. The Breconside herd’s stock bull, Gunnerfleet Nato topped the trade at 18,000gns. Nato is a January2017-born bull sired by Gunnerfleet Hicks, a son of the 32,000gns Dolcorsllywn Brynmor. Out of the homebred cow, Gunnerfleet Ilocks, who has also bred the renowned AI sire Gunnfleet Lion, a full brother to Nato. Nato displays myostatin of NT821 and F94L. Originally purchased by the Dernie family from Carlisle in May 2018 for 15,000gns, Nato is a proven stock bull, many of his progeny were sold ahead of him in the sale. After a keen bidding frenzy, Nato was purchased by J E Carruthers, Rochester, Newcastle-Upon-Tyne, where he will reside with their Redesdale herd.

Next in the trade and top price of the Barrons consignment from Willy Barron, who held a sale of all calved females from his herd, based in Burnhope, Durham. Barrons Mylassy went under the hammer with a bang for the 15,000gns, whilst her bull calf at foot, Barrons Stan, sold separately for 4,500gns. Sired by 40,000gns Mereside Godolphin, Mylassy is out of Barrons Classy, a daughter of Sarkley Volvo. A third calver, who has bred calves to £7,800, Mylassy was shown successfully as a maiden heifer with two championship titles under her belt. A beef value of LM37 places this cow in the top 25% of the breed. Sold PD’d in calf to Huntershall Nutcracker. Mylassy caught the eye of the Lissett herd, now calling Bridlington, East Yorkshire home with J H Tennent. Barrons Stan, Mylassy’s bull calf who was sold separately, is a January2021-born son of the 38,000 euro Carrickmore Maximus, who was National Limousin Champion at Tullamore in 2018. Stan was snapped up by the Ridley family, Haltcliffe, Wigton.

Hot on their heels was Breconside Olympia, from the Breconside herd, achieving 14,000gns and her heifer calf Rosetta, selling for 9,000gns. Olympia is a March2018-born daughter of the Irish bred, Elite Icecream and out of, Breconside Jane who was sold for 6,500gns earlier in the sale. Olympia is a first time calver who displays two sets of the F94L myostatin gene and a beef value of LM39, placing her in the top 25% of the breed. Olympia went under the hammer PD’d in calf to the aforementioned Gunnerfleet Nato and Olympia caught the eye of Andrew Ewing’s Fairywater herd, heading to Annan. Olympia’s stylish September2020-born daughter Breconside Rosetta sold for 9,000gns. Rosetta is sired by 18,000gns Gunnerfleet Nato. This striking heifer displays myostatin of F94L/NT821. Rosetta heads over the water to the Damview herd with Mr McKeag, Newtownards, Co Down.

Next in the rank was a Breconside maiden heifer, Breconside Prickles, going under the hammer for 14,000gns. The May2019-born Pickles was one of the first daughters from the 18,000gns stock bull Gunnerfleet Nato. Dam Breconside Framble, sold earlier in the sale for 7,500gns, also bred Breconside Ora, who was champion at Red Ladies Day in 2019 and sold for 7,100gns. Prickles carries two copies of the F94L myostatin gene and was sold PD’d in calf to the 35,000gns Ampertaine Majestic. Prickles now resides with the Emsiles herd, based in Peterhead, Aberdeenshire.

Hot on their heels at 12,000gns was from the Andrew Gammie, Laurencekirk, Aberdeenshire, who offered a consignment of females from his Westpit herd. Topping the trade for Andrew was Westpit Millie and her heifer calf at foot, Westpit Silly. Millie is a June2016-born third calver, sired by Jalex Itsallgood, a son of the 10,000gns Swarland Eddie. Millie is out of homebred Westpit Becky, who has a French dominated pedigree. Sold with her heifer calf at foot, Sillie, who is Andrew’s favourite 2021 heifer calf. Sired by Dinmore Immense. Millie is also sold PD’d in calf to Johnstown Premier. This outfit caught the attention of Ian Miller, Inverurie, Aberdeen where the pair will call the Miller’s prefix home.

Next going under the hammer for 11,000gns was Barrons Nova. Out of Sarkley Floss, Nova was the only female going under the hammer from the Barrons herd not bred out of a homebred cow and is sired by renowned AI sire, Wilodge Cerberus. A proven breeder, Nova’s first calf was sold in February 2021 at 13 months for £3,570 and her second calf is being retained within the Barrons herd and is Willy’s favourite heifer of the year. This January-17 born second calver displays myostatin of F94L/NT821 and is sold PD’d in calf after being AI’d to Sarkley Volvo. Nova now calls the Jorica herd home with J Knaggs, Darlington, County Durham.

Closely following at 10,000gns is another offering from Andrew Gammie’s Westpit herd. Westpit Mila is an October2016-born cow who has plaid a vital role in the Westpit flushing team. Sired by Jalex Itsallgood, a son of the 10,000gns Swarland Eddie. Out of the homebred cow, Westpit Joy, Mila is a full sister to Westpit Ocean and is a maternal sister to Westpit Rocky, who was purchased privately by the Guards herd. Mila carries two copies of the F94L myostatin gene and a beef value of LM41, placing her in the top 10% of the breed. Mila is sold PD’d in calf after being AI’d to Milbrook Playboy and Johnstown Premier. Mila doesn’t have far to travel home, going to Penrith with Messrs Jenkinson to the Whinfellpark herd.

A price of 10,000gns was also achieved by Willy Barron of the Barrons herd for the homebred stock bull, Barrons Major. This March2016-born son of 40,000gns Mereside Godolphin is out of Barrons Emma. Major has two copies of the F94L myostatin gene and Major was purchased by R Thornton, Kirkwhelpington, Newcastle-Upon-Tyne, to use within their commercial herd.

Hot on their heels at 9,500gns was a heifer from the Westpit herd in the shape of Westpit Royaljen. This November2020-born heifer descends from the Sarkley Ellajen family. Sarkley Ellajen also bred the 50,000gns Bassingfield Machoman, sire of the champion and reserve champion bulls from Friday’s show. Royaljen is sired by 38,000gns Ampertaine Foreman. Carrying two copies of the F94L myostatin gene, she also displays an impressive beef value of LM56, placing her in the top one percent of the breed. Royaljen caught the eye of the Plumtree herd and heads on to Nottingham with Paul Cairns.

Knocked down at 7,5000gns was Breconside Framble and her heifer calf at foot, Spangle. Framble is an April2010-born Wilodge Vantastic sired daughter of Kaprico Bramble. This nineth calver is the dam of Breconside Ora, who was crowned Champion at the Red Ladies sale in 2019 and sold for 7,100gns and Breconside Prickles who sold later in the sale for 14,000gns. Framble now finds herself in the Dunlops herd with Stewart Dunlop, Ayrshire.

The first of four animals to go under the hammer for 6,500gns was Westpit Ritaora, from Andrew Gammie. This March2020-born heifer is out of Westpit Megan and sired by Dinmore Immense. Ritaora carries F94L and Q204X myostatin, she also displays an impressive beef value of LM48, placing her in the top 10% of the breed. Now calling Penrith home, she was purchased by Mr A Green.

Next at 6,5000gns was Barrons Oulip. This January-18 born second calver is sired by Ironstone Colonel and out of Barrons Hulip. Oulip displays two sets of Q204X myostatin and was sold PD’d in calf to Barrons Major, who sold for 10,000gns later in the sale. Now calling Lancaster home, she was purchased by J Nelson and Son.

Also going under the hammer for 6,500gns was Breconside Jane and her bull calf at foot Sammy. Jane is a January-14 born fifth calver, sired by the 50,000gns renowned AI sire Wilodge Cerberus. Out of an Irish bred dam Ardglasson Vine, who has a French dominated pedigree. Jane carries two copies of the F94L myostatin gene and a beef value of LM34, placing her in the top 25% of the breed. Jane went under the hammer PD’d in calf to 18,000gns Gunnerfleet Nato. Sammy, the April2021–born bull calf sold at foot is sired by the herds stock bull, Gunnerfleet Nato and carries the myostatin traits F94L/NT821. Heading North to Argyll, this outfit was purchased by HC and LA Macgillivray.

Knocked down at 6,500gns was Goldies Nicola, brought forward from the Breconside herd. Originally bred by Bruce Goldie, Dumfries. A daughter of Ampertaine Forman, the July2017-born Nicola is out of Millington Gorgeous, who has a French dominated pedigree. Carrying myostatin of F94L/F94L, Nicola also has an impressive beef value of LM55. She was sold with her March2020-born Gunnerfleet Nato sired heifer calf, Breconside Sahara and they Sahara and Nicola were purchased by Cow Ark Farm, Clitheroe for their Whitewell herd.