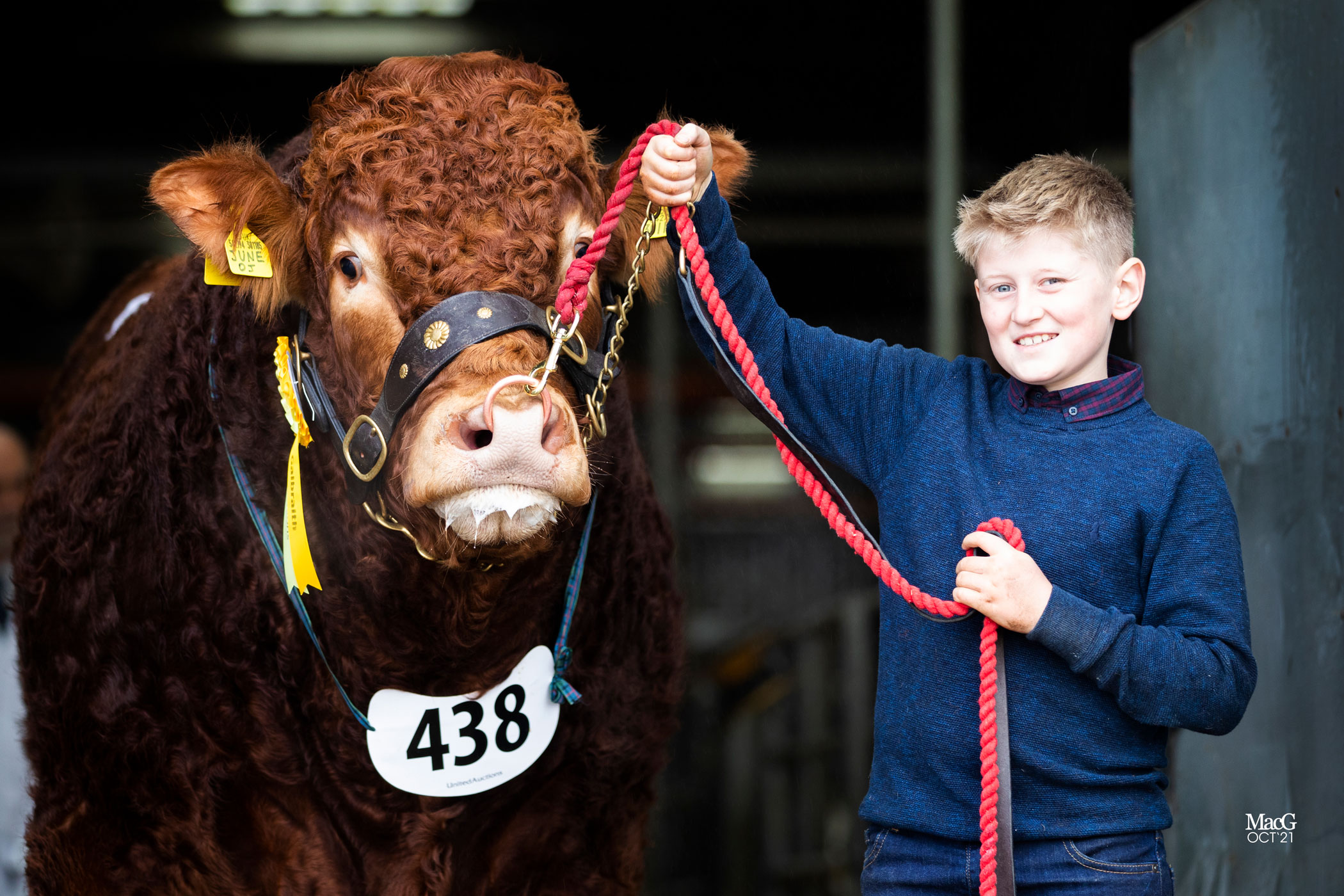 After a busy weekend south of the border, Stirling was home to the second Society Limousin bull sale of the Autumn. Bulls from 26 of the top herds across Scotland came together to offer their animals under the hammer. Averaging £5,085, demand was strong with an increase of £603 on the same sale in October 2019.

After a very successful weekend in Carlisle, the Nimmo family headed North with their team of bulls for the Stirling sale. Topping the sale at 9,000gns was Maraiscote Regie, an April 2020-born son of the 50,000gns Bassingfield Machoman, who goes back to the 32,000gns Millgate Fame. Out of the homebred cow Maraiscote Jellybean, Regie carries myostatin of F94L and Q204X and a beef value of LM47, placing him in the top 10% of the national herd. Regie was crowned overall champion and junior champion after winning his class in the pre-sale show under judge Alistair Vance of the Bridgehouse herd, based in Newton Stewart. After a keen bidding frenzy, Regie was knocked down to the Turville herd, now calling Aylesbury home with H B Lear.

The second highest price of the day was 8,500gns, paid for Newhouse Rambo from R M Adam and Son, Forfar, Angus. This March 2020-born Westhall Jammy sired bull is bred out of the homebred cow Newhouse Joops, a daughter of the 10,000gns Millington Ferrari. Rambo carries two copies of the F94L myostatin gene and a beef value of LM57 placing him in the top one percent of the breed. Rambo now calls Perth home with T Howden’s commercial herd.

Bangtidy Ralphlauren also went under the hammer for 8,500gns, brought forward for sale by Andrew Hyslop, Stirling. The January 2020-born son of the 35,000gns Ampertaine Foreman, this is the first calf to be sold out of Ironstone Madam. Carrying two copies of the F94L myostatin gene, he also is in the top 10% of the breed with a beef value of LM48. Ralphlauren caught the eye of the Mclaurens herd, now calling Angus home with new owners Messrs W McLaren.

8,000gns was achieved for Allanfauld Rockstar, from Archie MacGregor, Kilsyth, Glasgow. Rockstar stood overall intermediate and reserve overall champion in the show. Sired by Wilodge LJ, April 2020-born Rockstar is out of Goldies Onedream, a maternal sister to the 30,000gns Goldies Positive. Displaying myostatin of F94L and NT821 and a beef value of LM31, Rockstar played the right notes for A Sharp and Sons, Alford, Aberdeen, and goes on to work for their commercial herd.

Dyke Rembrant sold for 8,000gns, travelling from the Milton of Campsie, Glasgow, with breeder Messrs J R MacGregor. Sired by Goldies Lordoftherings, who was purchased by the Dyke herd for 12,000gns in February 2017, Rembrant is out of the homebred cow, Dyke Florette, who has previously bred the 13,000gns Dyke Macbeth. The April 2020-born Rembrant carries two copies of the F94L myostatin gene and a beef value of LM45. Rembrant was picture perfect to Walter Dandie and Sons, who purchased him for their Learielaw herd based in West Lothian.

Ronick Raymond was next in the trade stakes selling for 7,000gns. Brought forward by Mr R Dick, Stirling, Raymond is a January 2020-born Westpit Nando sired bull, out of Ronick Marion. Raymond carries myostatin of F94L and Q204X and an impressive beef value of LM54, placing him in the top one percent of the breed. Raymond caught the eye of Kinross commercial breeder, W S Patterson.

Goldies Rocksolid went under the hammer for 7,000gns, brought forward by Bruce Goldie, Dumfries. This March 2020-born son of Goldies Juggler is out of Goldies Joyeuse who has bred Goldies Pamela, who sold for 18,000gns at the Red Ladies sale in 2018. Rocksolid carries two copies of the F94L myostatin gene and a beef value of LM45. This Goldies bull was a solid choice for D and J Smith, who take him home to Inverkeilour, Angus.

Strawfrank Roy was knocked down at 6,500gns. The February 2020-born Roy is sired by Whinfellpark Lomu and is out of Tallyrock Elsie and was placed third in his class at the pre-sale show. Roy carries two copies of the F94L myostatin gene and has a beef value of LM38. Roy was the first of nine bulls to be purchased by the Scottish Government Bull Stud based in Inverness.

Next in the trade at 6,200gns was Anside Ricco, from Mr and Mrs Irvine, Drummuir, Keith. The April 2020-born Ricco is sired by the Ampertaine Elgin and out of the homebred cow Anside Jaffa. Ricco carries two copies of the F94L and a beef value of LM33. Now calling Girvan, Ayrshire home, Ricco was purchased by W J R Mckinley.

Another offering from Allan Campbell’s Strawfrank herd, was Strawfrank Racing, going under the hammer for 6,000gns. He is sired by Haltcliffe Doctor and out of Greenwell Finesse, both of which have French dominated pedigrees. The March 2020-born Racing carries myostatin of F94L and NT821, and a beef value of LM45. Now calling Monymusk, Inverurie home, he was purchased by A and H Sim and Son.

Achieving 5,800gns was Strawfrank Reedi, presented by the aforementioned Allan Campbell. Sired by Westpit Highlander, the April 2020-born Reedi is out of Homebyres Greedie. Reedi carries a beef value of LM31 and two copies of the F94L myostatin gene. Reedi caught the eye of Mr R Currie who takes him home to Tarbert, Argyll.

Also going under the hammer at 5,800gns was Corsairty Rocco, presented by R and K Davidson, from Keith, Banffshire. The March 2020-born Rocco is sired by Ronick Inspector and is out of the homebred cow Corsartirly Joelle. Rocco carries two copies of the F94L myostatin gene and caught the eye of G Mackie, Crieff, Perthshire.