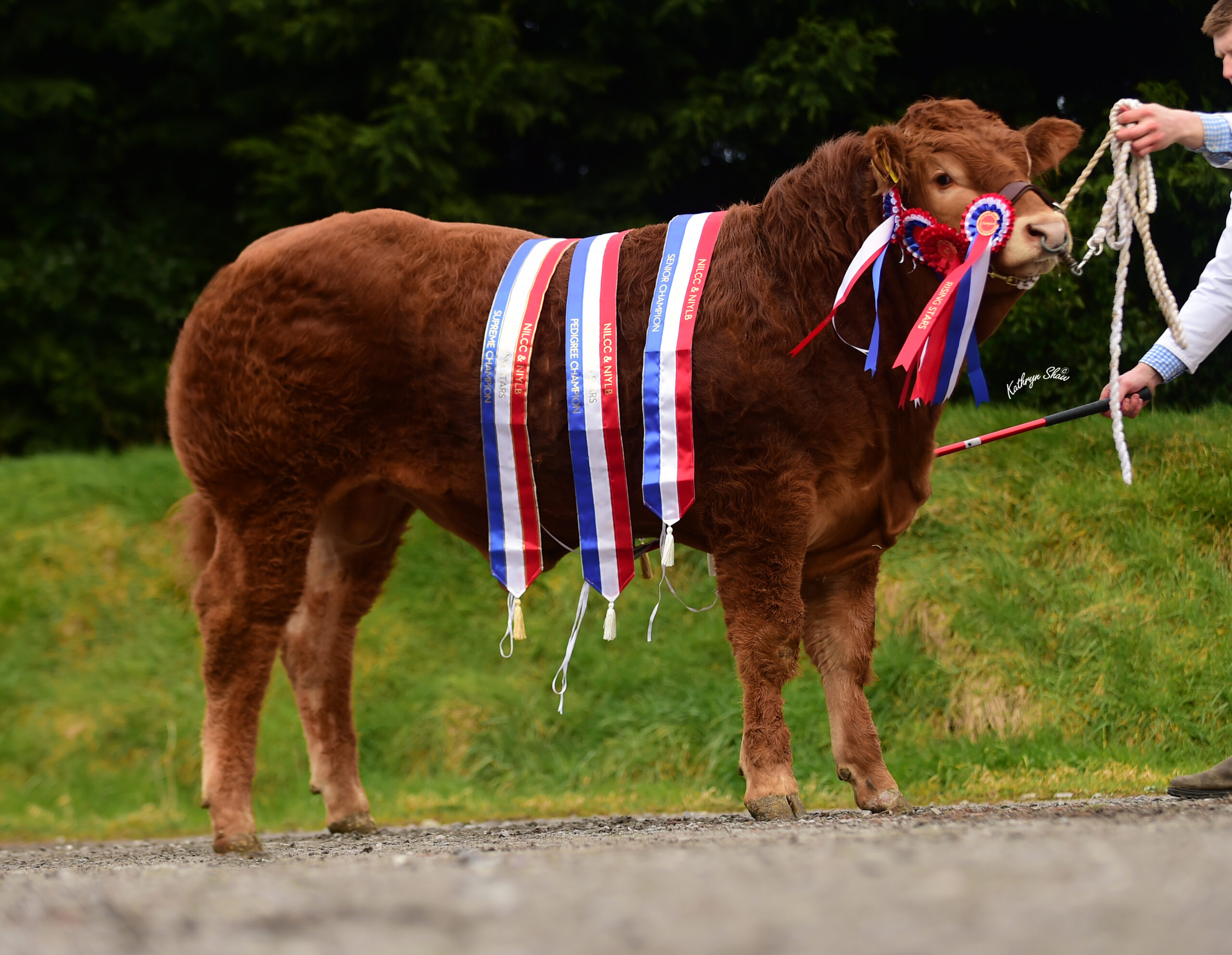 Saturday 12th March saw the return of the NI Limousin Cattle Club & NI Young Limousin Breeders “Rising Stars” show, with breeders enthusiastic to return to the show ring after a long break due to the pandemic. The buzz was back in the market, all wanting to see what the Northern Ireland breeders have on their show team for the 51st Anniversary year of the British Limousin Cattle Society.

Llyr Hughes of the Pabo herd judged the Pedigree and Commercial classes and was blown away by the high standard of cattle presented in front of him commenting many times “you’ve good cattle here”. Entries were open to all pedigree and Limousin-sired commercials born in 2021. Classes were split into a senior, junior, pedigree and commercial section, with the pedigree and commercial going head-to-head for the supreme championship sponsored by Whinfellpark Limousins.

Llyr had this to say about the show and his champion: “I would like to take this opportunity to thank everyone involved. The welcome Laura and I received at farms and the show was fantastic. Exceptional show of cattle extremely well presented, which made a feast for the eyes! The title of the show is exactly what I had the privilege and honour to judge, and the champion is definitely a future star. This event will go from strength to strength”.

Senior Champion, Pedigree Champion and Supreme Overall Champion was awarded to Drumhilla Superstar bred and exhibited by Gareth Corrie, Newtownards. April 2021 born Drumhilla Superstar is sired by Gareth’s stock bull Ampertaine Majestic and out of the 15,000gns Glenrock Northernstar.  This young bull is full brother to the 9,000gns Drumhilla Rambo who was Reserve Intermediate Champion at last years October bull sale in Carlisle. Superstar will be destined for further showing throughout the summer and will be aimed for the sales later in the year.

Reserve Supreme Champion, Reserve Pedigree Champion and Reserve Senior Champion was awarded to Boleyn Sasha bred and exhibited by Michael Savage, Ballynahinch. January 2021 born Boleyn Sasha is sired by Ampertaine Elgin and out of the Wilodge Vantastic dam Drummin Libby. This young heifer is set for a very bright future with plans for further showing throughout summer 2022.

In the Junior section it was the father and son duo, Trevor and William Shields who were tapped out as Junior Champion with Glenmarshal Snapper. Snapper offers some outcross breeding being sired by 26,000gns Foxhillfarm Ourbest and out of Homebyres Vanhee daughter, Homebyres Duplicity. Following up with Reserve Junior Champion was Claragh Sapphire, bred and exhibited by John & Paul Rainey.  This young heifer is sired by Ampertaine Foreman and out of an Ampertaine Elgin daughter, Claragh Ignite who goes back to the herd matriarch Haltcliffe Avon.

The commercial section was well represented with top quality stock forward.  Retaining their Commercial Championship title from the 2020 Rising Stars show was team JCB Commercials with their Ampertaine Elgin sired heifer, 50 shades of Grey. This blue/grey heifer was bred by Derrick Forde, Galway and was purchased by the JCB team last November at the ‘Elite Commercial Haltered Cattle Sale’ in Stranorlar. In reserve was Keith and Stephen Williamson with their Castleview Gazelle heifer Déjà vu. Both these heifers have their spot booked into the 2022 RUAS Balmoral Show where hopefully they will continue their winning streak.

The pairs championships sponsored by Norbrook Laboratories attracted strong competition.  Made up of two animals exhibited by the same exhibitor and a combination of two males, two females or one male and one female the winner of this championship was John & Paul Rainey’s pair of heifers, Claragh Sofia and Claragh Sapphire. Following in reserve was Connor & Ryan Mulholland’s pair Deerpark Saffron and Deerpark Saturn.

Thank you to all our volunteers who helped in any way and thank you to Llyr and Laura Hughes for coming over and judging the 2022 Rising Stars show.

Eight very enthusiastic and smartly turned out young limousin breeders took to the show ring to compete against one another in their first young handler competition of 2022.  With competition fierce, this class was open to young breeders aged between eleven and twenty-one.

Under the watchful eye of judge Laura Hughes, from the Pabo Herd in Wales, no stranger herself to the bustling show ring and with many success’ over the years, it was great to see so many young breeders showing style and presence, with their limousin calves, on their first outings to a show ring.  Some of our more experienced young breeders also took to the halter to compete and their handling skills were evident as they get better with every show they attend.

Merchandise for goodie bags was provided by our sponsors Whinfellpark and the British Limousin Cattle Society and presented to all taking part.  YLBNI Chairperson Louise McMullan commented “we hope to see these young folk back again when we’re holding open days and at the local summer shows! Our young people are the next generation of stockmen/women, which is something very special”.