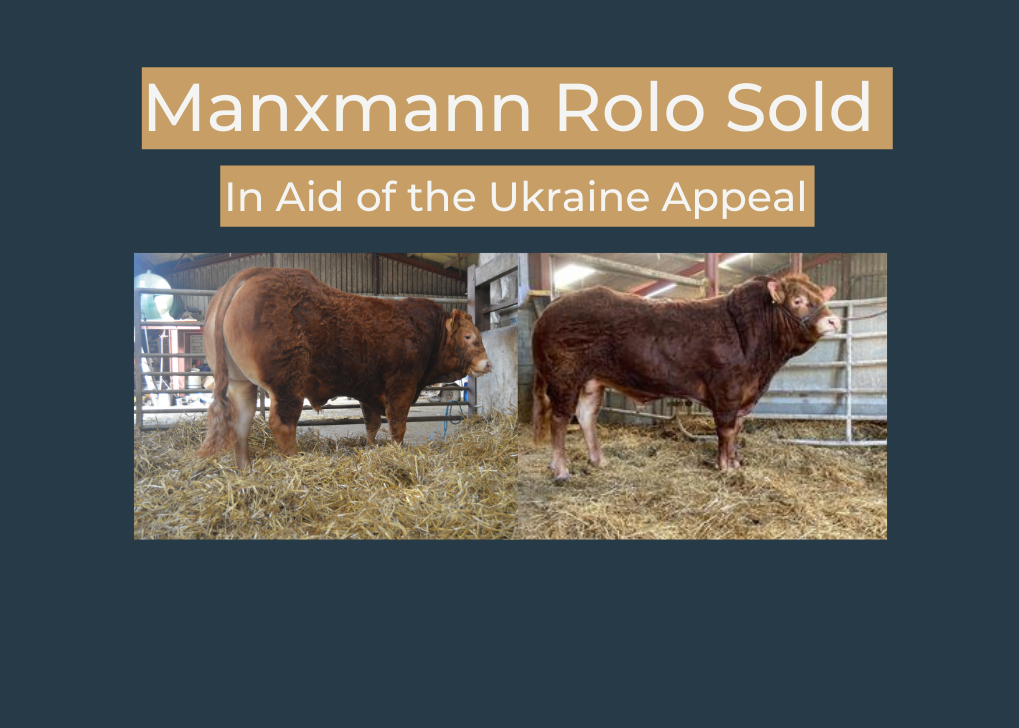 On Wednesday 23rd March, Jonathan Quine of the Manxmann herd based at Ballakilley Farm, Bride, Isle of Man, in conjunction with the Isle of Man Central Marts, offered up 18 month old Limousin Bull Manxmann Rolo for auction with the proceeds going to support the Ukraine Refuges appeal. This superb quiet bull out of a homebred bull Manxmann Oscar, and heifer Manxmann Nana, who’s grand sires are Wilodge Goldcard and Netherhall Jackport sold for £3,500 to fellow renowned local breeder Brain Leece of the Mannin herd, and together with other pledges the fund is now in excess of £11,000.

Manxmann Rolo was destined for the May Carlisle sale, but when Jonathan was approached by the Central Marts he could not let them down for such a good cause.

Jonathan has great pride in his cattle breeding both pedigree Limousin and Charolais, primarily being breed to sell on as breeding stock. The Limousin herd under the prefix Manxmann was established in 2014, with the purchase of 7 maiden heifers from the Mannin herd, with the breeding selection via AI being carried out by his daughter Jennifer.

Jonathan’s family came to Ballakilley Farm in 1939, and after being pasted on from his grand-parents, he now runs the farm with his family. The farm consisting of 80 acres in Bride, at the northern tip of the Isle of Man, currently running 26 Limousin and 16 Charolais pedigree breeding cows and their followers, with the heifers being kept as replacements, although he did sell two heifers at Carlisle in February this year for the first time, together with approximately 80 pedigree sheep consisting of Bluefaced Leicester and Suffolk’s. All stock being breed primarily for the sale of bulls and tups for breeding.