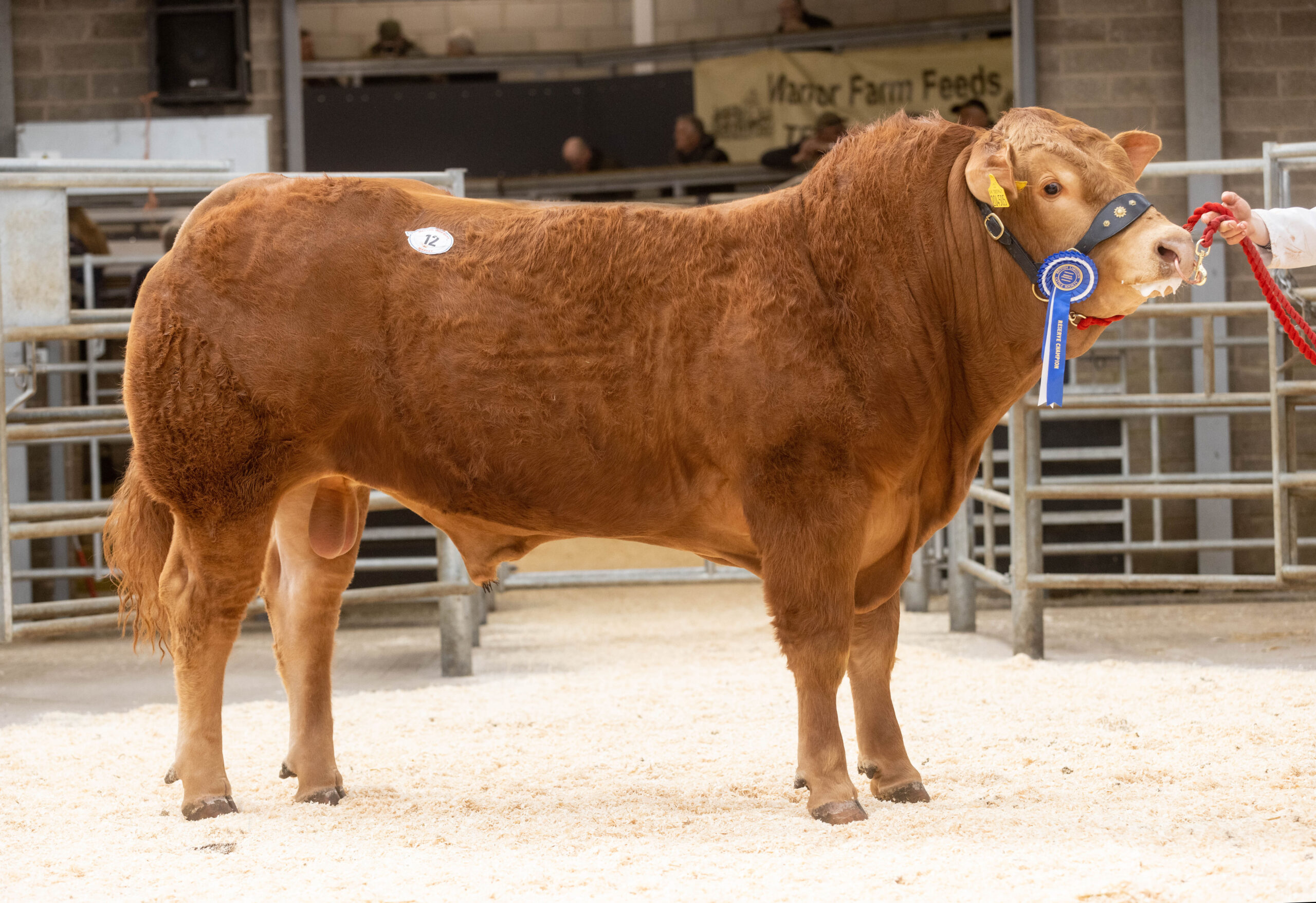 It was a beautiful Spring day for all heading to the Melton Mowbray Society sale on Saturday 9th of April 2022. Bull top price was 7,000gns, up 200gns on the previous year. 16 bulls achieved an average of £3,760 with a clearance rate of 73%. The sale was dominated by commercial buyers demonstrating yet again, consistent support for the number one terminal sire.

Auctioneer Scott Ruck commented “We were delighted to welcome a healthy entry of 80 breeding bulls and females forward. My thanks go to Judge Alan Morgan who undertook the difficult task of judging the quality stock forward from across the counties. And thanks, as always to our vendors and purchasers for supporting this sale and we look forward to welcoming you back to the Eastern Region Limousin Sale in the Autumn”

Judge for the day was Alan Morgan of the Almande herd, based in County Durham. Having previously attended the sale a number of times, he commented that the champion male and reserve champion male stood out as the type of bulls he would take home and use. The championhip was closely contested as they were both exceptional examples of the Limousin breed.

Reserve overall champion Woodmarsh Roman conquered the trade with a top price of 7,000gns, brought forward by M and J C Gould Ltd, Grange Farm, Shrewsbury. Roman has double F94L myostatin and an impressive Beef Value of LM52 placing him in the top 1% of the breed. This July 2020-born bull is sired by Mereside Lorenzo and is out of Millington Highlight, who sold for 50,000gns in 2016. His chariot took him home to AE Neachell Son, Shrubbery Farm, Walsall.

Presented by G J Lee and C M Lloyd, Ger-Y-Coed, Carmarthenshire it was then time for Calogale Rolex to enter the ring, selling for 5,000gns. This July 2020-born bull, sired by Bernish Memphis who goes back to Fairywater Haig, is out of Trueman Florence who was purchased by the herd for 8,800gns in 2011. Rolex has F94L/Q204X myostatin and a Beef Value of LM31, and was purchased by J B Thompson, Staiby House Farm, Lincolnshire.

Next in line was the 4,600gns September 2020-born Ewdenvale Robroy, from S Wilde, Spite Winter House, Sheffield. He is sired by the renowned AI bull Ampertaine Magnum, who sold for 70,000gns in 2017 and out of the homebred cow Ewdenvale Nina. Robroy has NT821/Q204X myostatin and a Beef Value of LM35. He was snapped up by A Clifton, Mill Lodge, Wisbech.

Following closely behind was 4,500gns Stain Rocketman brought forward for sale by T J Denby and Son, Longlands Farm, Alford. Placing first in his class, this October 2020-born bull has double F94L myostatin and a Beef Value of LM47. He exhibits impressive growth figures placing him in the top 10% for the breed. Rocketman is sired by Carrickmore Maximus and out of the homebred cow Stain Lacey. He darts home to A Kaye and Sons, Town Head Farm, Dunford Bridge.

Overall champion for the day made 4,400gnsand was Woodmarsh Rubel from M and J C Gould Ltd. Rubel who was born in May 2020, has double F94L myostatin and a Beef Value of LM48. He is sired by the popular AI bull Wilodge Cerberus and is out of Foxhillfarm Olivia who goes back to Glenrock Illusion. He now calls Essex home, at Fristling Hall Farm, Swan Lane.

Two bulls achieved 4,000gns, the first being Procters Ricardo presented by W Tomlinson, Springfield House, Nottingham. This May-2020 born bull is sired by Ampertaine Majestic who sold for 35,000gns in 2018 and is out of Procters Juleiha. Ricardo has double F94L myostatin and a Beef Value of LM48. He was the second purchase of the day for Fristling Hall Farm.

G J Lee and C M Lloyd brought forward Calogale Razzmatazz who also sold for 4,000gns. Razzmatazz who was born in July 2020, displays double F94L myostatin and a Beef Value of LM36. He is sired by the aforementioned Bernish Memphis and is out of the homebred cow Calogale Izzy who goes back to Goldies Comet. He heads to Needles Farm, Ferry Lane with CF and SR Booth and Son.

Another high price for the day was 3,500gns for the September 2020-born Wallingfen Rosco from S and J M Scott, Bridge Farm, Brough. Rosco is sired by the 22,000gns Gunnerfleet Lion and out of Hollyberry Jill. He has double F94L myostatin and a Beef Value of LM33. He caught the eye of T Ashworth from Old Marsham Farm, Cliff End.

The January 2021-born Hollyberry Sylvester from A and V Brown and Sons, Swallow Cottage, Selby, went under the hammer for 3,200gns. Sylvester who is a heifers calf, has F94L/Q204X myostatin and a Beef Value of LM35. He is out of Saltbrook Octopussy who goes back to Gerrygullinane Glen and is sired by the renown AI bull Plumtree Fantastic. He now resides at Graham Knight Farming, 18 Ganite Street, Kettering.

There was a number of quality breeding females presented for sale. 31 females achieved an average of £1,866 and a clearance rate of 69%.

The top price female for the day who rocked her way to 3,000gns was Enigma Nirvana, brought forward by Osborne Partnership. This April 2017-born female has double F94L myostatin and a Beef Value of LM32. She was sold with bull calf at foot Enigma Simba, who is sired by Wilodge Goldcard. Nirvana is sired by Haltcliff Gunner who goes back to Cloughhead Umpire and is out of the cow Enigma Julia. She was snapped up by WRB Farming, Tithe Farm, Northants.

Up next, we had 2,750gns Cockleshell Penny, a January 2019-born heifer from I Pitcher, Ivy House Farm, Lincolnshire. Penny has a double F94L myostatin and a Beef Value of LM 38. She is sired by Mereside Hanniball who goes back to Amertaine Commander and is out of the homebred cow Cockleshell Imogen. She has gone home to P Green, Stone Road End Farm, Tuxford.

Following closely behind we have 2,700gns Cockleshell Imogen presented by I Pitcher of Cockleshell Pedigree Limousin herd. This November 2013-born cow has a double F94L myostatin and a Beef Value of LM40. She is sired by Chytodden Conan and is out of the homebred cow Cockleshell Georgina. Imogen was sold with her bull calf at foot, who was sired by Greensons Nickle to K D and J Leighton and Sons, Fairfield Farm, Barmby on the Marsh.

WJ and M Mash brought forward two cows who both achieved 2,500gns. The first was the third purchase of the day for Fristling Hall Farm, Brockhurst Ragdoll. Ragdoll has a Beef Value of LM39. This June 2020-born heifer was sired by Newroddige Jetset who comes from Haltcliffe Underwriter and out of the homebred cow Brockhurst Leslie.

The second was the March 2020-born Brockhurst Ringo. She has a Beef Value of LM42 and was sired by Dinmore Meatloaf who goes back to Diamant, and is out of Ronick Jingo. Ringo will return home with L Lawrence-Baines, Woodfarm, Ellistown.

Next, we had a trio which achieved 2,400gns, of which two were presented by M D and W M Morton, Kamloops Ville, Lincoln. The first of which was the April 2009-born homebred cow Blackfriar Emelia. She is out of the cow Oaktree Amelia and is sired by the 42,000gns Cloughhead Umpire. She now resides at Fairfield Farm, Barmby on the Marsh, with K D and J Leighton and Sons.

Then came the April 2021-born Cockleshell Heather who headed home to J F Sharp and Son, Top Farm, Eaton. Heather was sired by Chytodden Conan who goes back to Objat and is out of the homebred cow Cockleshell Bindy.

Also achieving 2,400gns was Brockhurst Ruby for WJ and M Mash. This April 2020-born heifer was purchased by the aforementioned Fristling Hall Farm. Ruby has a Beef Value of LM38 and was sired by Dinmore Meatloaf who goes back to Diamant and was out of the homebred cow Brockhurts Juliet.