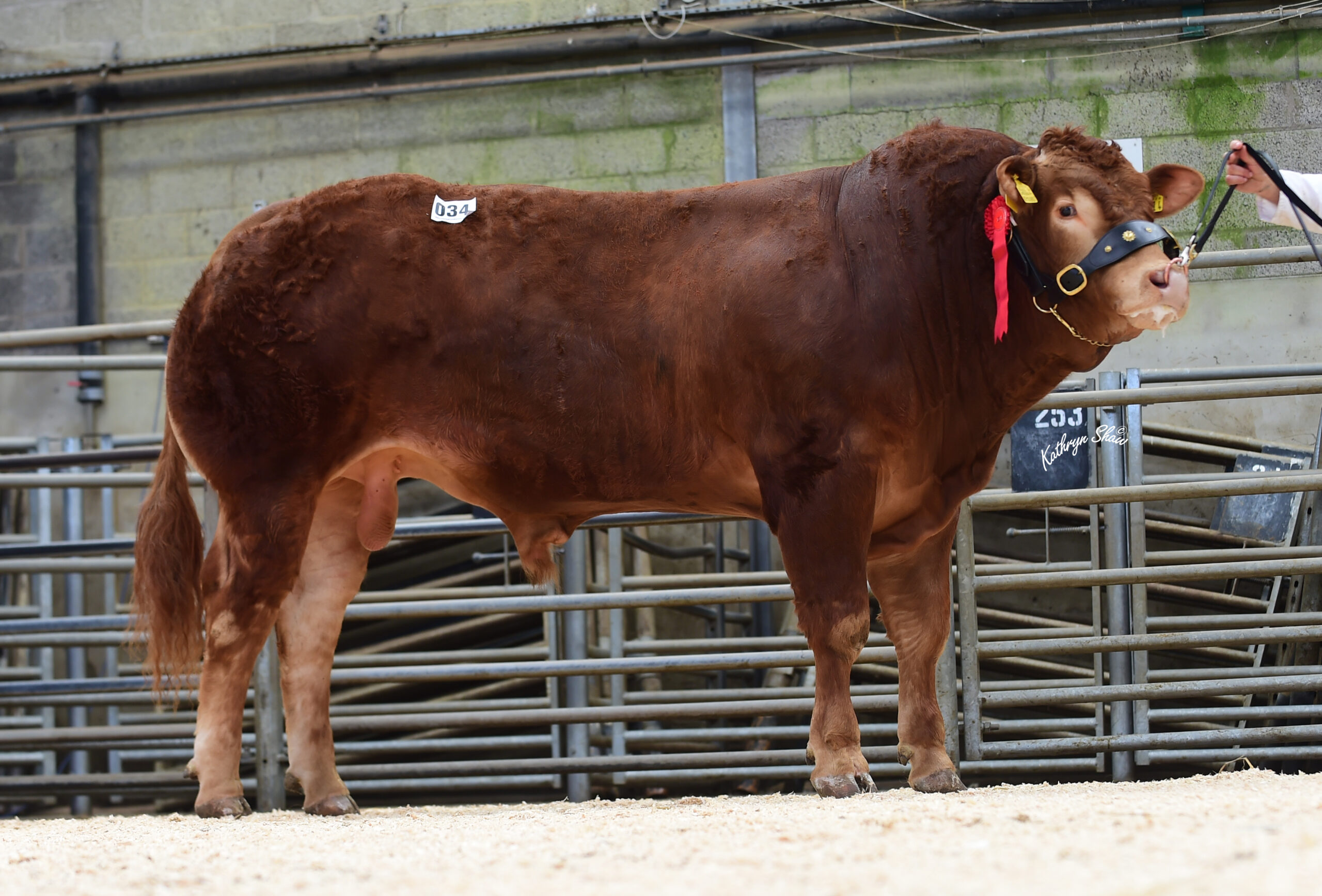 The British Limousin Cattle Society’s May Day sale at Ballymena Livestock Market was dominated by commercial buyers demonstrating yet again, consistent support for the number one terminal sire.

Topping the trade at 10,000gns was Larkhill Rembrandt from Brian and Cahir McAuley, Larkhill Farm, Antrim, Co Antrim.  This November 2020 born bull is by Whinfellpark Lomu and out of the dam Larkhill Jenny.  Rembrandt boasts two sets of the F94L myostatin gene and stood 1st in his class at the pre-sale show earlier in the day. Rembrandt heads home with limousin breeder W Sherrard of the Greenvale herd to Coleraine, Co Londonderry.

The second highest price of 6,200 gns was given for Ballyrobin Realmccoy home bred by Joan Gilliland, Antrim, Co Antrim.  August 2020 born Realmccoy is sired by Whinfellpark Lomu and out of Ballyrobin Lugs, a Netherhall Doubleoseven daughter.  Realmccoy boasts double F94L myostatin and stood 1st in his class at the pre-sale show. He was tapped down to Andrew Ferguson, Newtownstewart.

Next up was Overall Champion Carmorn Radar, a December 2020 born bull fetching 6,000gns.  Home bred by C & F McAuley, Toomebridge, Co Antrim, Radar is an Ampertaine Nugent son and out of the dam Carmorn Giroflee.  This bull was purchased by J Morrow of the Saintfield limousin herd in Co Down.

Henry Savage and Sons, Cullyhanna, Co Armagh brought forward Trueman Rollingstone, the Reserve Senior Male Champion who sold for 5,500gns.  A September 2020 born bull sired by Grahams Samson and out of the dam Trueman Indie, an Ampertaine Elgin daughter, Rollingstone has two sets of the Q204X gene and a beef value of LM33.  He was purchased by W J C Stewart, Aberdeenshire.

Bernish Romeo bred by Kieran McCrory, Sixmilecross, Co Tyrone sold for 5,100 gns.  This October 2020 born bull is by Ampertaine Foreman and out of one of the top cows in the herd Bernish Julifortune.  Romeo boasts double F94L myostatin and a beef value of LM42 putting him in the top 10% of the breed.  He heads home with P Kealey to Dungiven, Co Londonderry.

Following closely behind was 5,000gns Ballyrobin Risteard brought forward for sale by Joan Gilliland, Antrim, Co Antrim. Born September 2020, Risteard is sired by Loyal and out of the dam Millburn Mags who was purchased at the Millburn dispersal sale in 2020.  Risteard was Reserve Overall Champion in the pre-sale show and was snapped up by Frank King, Warrenpoint, Co Down.

The top priced female for the day, who rocked her way to 2,700gns, was Female Champion Craigatoke Rue home bred by Martin Conway, Plumbridge, Co Tyrone.  October 2020 born Rue is by Norman Ely and out of the dam Craigatoke Nan.  She was purchased by the judge Blair Duffton, Aberdeenshire.

Up next we had 2,200gns Carnew Sara, a January 2021 born heifer from J & J Aiken, Dromore, Co Down.  Sara is sired by Goldies Jackpot and out of the home bred dam Carnew Ladyjane.  She has a beef value of LM49 and was purchased by Greg Armstrong, Ballymena.

Pointhouse Sunshine bred by M & K Diamond, Garvagh, Co Derry sold for 2,000gns.  This June 2021 born calf is by Aultside Meanmachine and out of the dam Pointhouse Lookinggood. Her new home is with Donal McIlwaine, Cushendall, Co Antrim.

The N.I. Limousin Cattle Club would like to thank Blair Duffton who travelled from Aberdeenshire to judge the pre-sale show.  Blair commented “it was an honour to be asked to judge today and it has been a great day both outside and inside the show ring. My task has not been made any easier by the quality of cattle brought forward in the classes and I wish exhibitors all the best for a good sale and good prices.”

Thanks also go to Countryside Services (Caisley Tags) for their sponsorship of the Male and Female Champions and to the auctioneers Ballymena Livestock Market.