The British Limousin Cattle Society has announced that Pfizer Animal Health will be the main sponsors of the 2011 National Limousin Pedigree Herd Competition.   This competition is being held as a one-off in the Society’s 40th anniversary year and is an extension of the regional herd competitions traditionally held by the Society’s nine regional clubs each year.

In 2011, through the regional clubs, the Society has asked that each judge in the respective regional competitions put up one herd as an overall winner for that region.  Around the UK that will result in there being nine overall regional winners.  Thereafter the event’s national judge, Sam Coleman, will visit each of the nine winning herds with a view to selecting an Overall Winner of the 2011 National Limousin Pedigree Herd Competition.  The National results will be announced at a dinner that is provisionally to be held in Carlisle on the evening prior to the October 2011 Bull Sale.

Fittingly, Sam Coleman from Glarryford, Ballymena, N. Ireland, the current Honorary President of the British Limousin Society, has been invited to judge this special event event. Mr. Coleman has also donated a special President’s trophy for the winning herd, while valuable prize money will be awarded by the sponsors Pfizer Animal Health.

Speaking about his job in hand, Mr. Coleman said that herd size would not be the overriding determinant the final assessment. Overall presentation of the herd, the up and coming young stock, the breeding policy, herd health and herd successes would all be factors. 30% of the marks will be allocated to young stock and another 30% to breeding females. 20% of the marks will be allowed for sires used and the final 20% will be on overall herd management, breeding policy and herd successes.

Pfizer vet, William Sherrard said that the company, in association with Draxxin® an antibiotic for treating calf pneumonia, was pleased to be associated with a competition that encouraged top quality management and herd health.

He said “Recently published research1 has found the antibiotic tulathromycin, (trade name Draxxin®) reaches effective concentrations in cattle lung tissues from one hour post-administration. Once established, the research also reports that such levels were maintained for 15 days in the alveolar macrophages cells, which are part of the animal’s defence against bacterial pneumonia.” 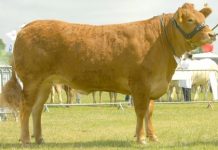