What must have been one of the biggest crowds ever seen at a livestock auction in recent years descended upon Ballymena Mart on Wednesday 7th January 2015 for the dispersal of of the commercial suckler herd of Will & Gareth Corrie, Drumhilla Farm, Newtownards. Prompted by the expansion of the Corries dairy unit, there was immense pre-sale interest from right across the UK and Ireland as details emerged.

The majority of stock that came under the hammer was over 100 head of cows and heifers, mainly Limousin sired, due to calve from February onwards. These were of exceptional quality and topped at £3700 paid for a black Limousin heifer selling at note to one of the herd’s stock bulls. The top price was purchased by Brian Cassidy, Maghera. 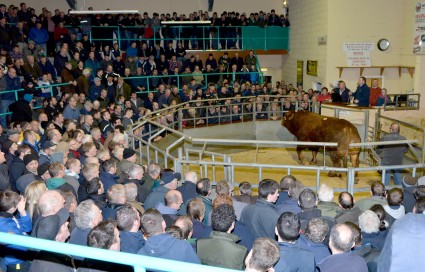 Spirited bidding was clear to be seen right from the start with those that could get into the packed sale ring keen to do business. The 101 cows and heifers leveled at an average of £1900.

The sale also included three Limousin stock bulls which sold to £4000, the day’s top price, for an Objat son. This was paid for the April 2009 born Wellhouse Elm who has bred tremendously well within the Drumhilla Farm commercial and pedigree herds. Elm was purchased by Sam Coleman, who runs the Glarryford pedigree herd at Glarryford, Ballymena. 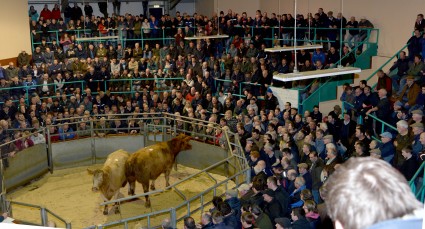 A number of steer calves were brought to the sale to show the type of quality that the females had produced in 2014. These were in demand tipping the scales at an average of 396 kilos and realising £1030 per head.

Every tail in the yard found a new home with a huge appetite for cattle from the busy ringside. There was a number of cattle exported to Wales with J & R Owen, Anglesey making their first purchases in NI.

The Corrie family wish all their purchasers well with their new stock, and would like to thank all those who helped in any way in the run up to the sale. 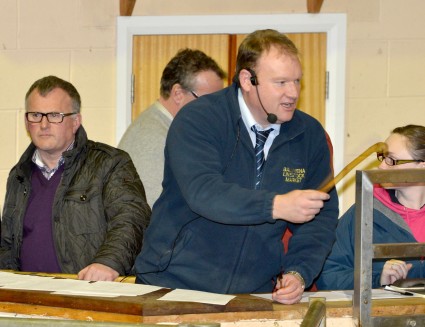