On a hillside above Inverness is the farm of Knocknagael.  Knocknagael is owned by the Scottish Government which operates the Crofting Cattle Improvement Scheme which leases pedigree beef bulls to crofting townships.   In 2013 the stud at Knocknagael was modernised and now provides accommodation for up to 150 bulls in a modern facility with high standards of welfare, biosecurity, disease control and environmental safeguards. 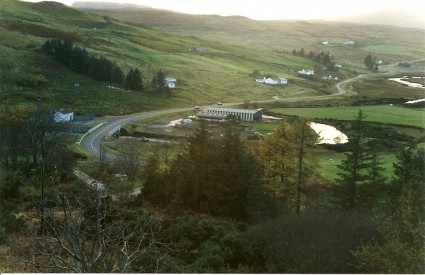 The stud was started in 1897 to provide Clydesdale and Highland stallions to crofting townships.  Bulls were introduced in 1911 when the aim was to support livestock improvement.  Today the same aim is to the forefront but now includes high health status and performance figures.  Stallions are no longer part of the stud.

To cut a long story short, in the late 1700s and into the 1800s many landowners in the north of Scotland evicted clans from their historic homes.  These people moved to estates who were willing to provide land for them put up a house and improve land in return for work on the estate or elsewhere locally.  This was the basis for crofting – a way of life and an economy based around people having a number of jobs and occupations.  Co-operation was necessary for the part time delivery of husbandry tasks and with the introduction in 1886 of the Crofting Act, townships were formed to formalise the sharing arrangements and to manage common grazings and in bye croft land.  Today 73% of all crofting activity is related to livestock[1].

The scheme hires bulls to crofters enabling access to high quality genetics.  “These bulls produce the calves which command top prices at sales across the Highlands and Islands each autumn with many going on to become replacement breeding stock.”  The scheme also provides socio-economic benefit for crofters with downstream benefits for auction marts with sales of over 3,500 calves each year, hauliers, feed merchants, vets, advisers and local communities.

Currently around 100 bulls are delivered to 86 crofting townships in the spring and return to Knocknagael in the autumn for wintering.  On their return to the stud they are tested for a range of notifiable and economically important diseases.  At this point a decision is made as to whether the bull will be retained or sold on the open market, where they are consigned for slaughter or purchased by livestock farmers as replacement bulls.  All bulls are semen tested, vaccinated against a range of diseases and foot trimmed before returning to crofts the next summer.  New replacement bulls are bought each year on the open market at Society sales across Scotland. 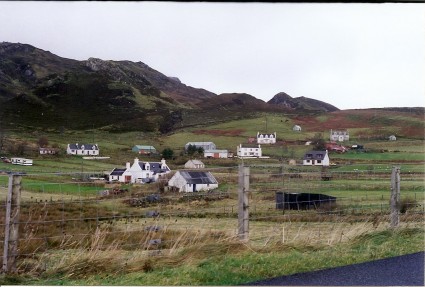 As part of the modernisation, two new buildings house the bulls. They are designed to encompass up to date methods of biosecurity, disease management and control, safe handling systems for bulls and provide a high level of comfort and welfare for the bulls.

The first building is the reception building in which returning or newly purchased bulls are housed pending the result of tests.  If clear, bulls move to the main accommodation building for the winter.  This building also houses the veterinary area where there is a handling crush and small laboratory.  Routine annual disease screening and semen testing are done here.  Bulls which do not pass their screening tests are moved to an isolation area pending a decision on their future.

In the accommodation building bulls are housed individually in straw bedded pens which can be split to allow half the pen to be scraped.    Each pen is designed so there is a lying area and a hard standing.  Pens are 20 feet x 10 feet, have self catching yokes and a man escape.  The stud has its own tip over foot trimming crush which is used in the accommodation building.  A TMR ration is fed based on home grown silage and a compound balancer.

Selection of bulls for the stud

Stud manager, John Cowan, is responsible for the day to day running of the stud and the farm.  Part of his role is ensure that the bulls crofters get are fit for the environment they will encounter and to keep a record of the bulls that he sends to each crofting township to ensure they are not related to bulls used previously in the township.

Crofters place an order for a breed of bull a year in advance and it is this demand that drives the purchasing policy of the stud.  Bulls for crofting areas have a specific range of characteristics.

John Cowan and his team assess potential purchases at presale breed shows looking for a bull that is sound in feet and legs, can move freely, has good breed character and conformation, good temperament and of a size suitable for working on crofts.

“They also focus on EBV figures looking for ease of calving, maternal ease of calving (as many are kept or sold as replacements), milking ability and a beef value in the top 40% of the breed.”

Health status is the final point in the decision process.  Bulls should be from Johnes Risk Level R1 or R2 herds, free from, and vaccinated against, BVD, ideally from herds which are IBR and Leptospirosis free and from a TB4 area.

Up until the early 1980s the stud bulls were Aberdeen Angus, Hereford, Shorthorn and Highland.  The first continental bulls introduced to the stud were Simmentals in the early 1980s followed quickly by Limousins and then Charolais in the 1990s.  Over the last number of years, the breeds in the stud have included Limousin, Aberdeen Angus, Shorthorn, Luing, Simmental, Salers and Charolais.  Table 1 shows the current make up of the stud.

TABLE 1 CURRENT MAKE OF BREEDS IN THE STUD

Should a bull be unable to work the scheme will provide a replacement within a few days of confirmation from the local vet that the bull is not fit to work.

Other benefits of the scheme

Virtually all the natural vegetation found in the Crofting Counties is linked to agricultural activity.  Many sites are of international importance and maintenance of their value is dependent on low intensity livestock management.  Cattle are of particular importance in this supporting a range of habitats e.g. arable cropping, wetland, machair and heath.  A large number of notified features on SSSI and Natura sites in the Islands and to a lesser extent the mainland are dependent on cattle based crofting systems to maintain their favourable status.

John Cowan says “the stud has brought significant socio-economic benefits to the Highlands and Islands.  Anyone attending the calf sales on the Islands or at Dingwall Mart in October or the spring can see the quality of the calves and the demand for them.”  It’s great to hear how well the bulls are doing when I get calls from crofters and the positive impact this has for remote communities.  The scheme also provides wider benefits to the crofting areas and during our inspections you can see benefits of the cattle upon the ecosystems in the area.

George MacKay runs a 16 head suckler herd and a flock of 80 Cheviot ewes on his croft at Glaick, Ardross near Alness, Ross-shire.  The croft runs to 110 acres of in bye ground which is all down to grass.  The cows are a mix of Limousin, Simmental and Aberdeen Angus crosses all calving between March and May to a Limousin bull hired from the Government Bull Stud.  The cows are housed over winter on home grown silage and hay and a mineral supplement.  No concentrates are used. They graze the croft ground in the summer.  Calves are wintered on silage, hay and some concentrate and are sold in Dingwall Mart at the spring sales where they are regularly among the best prices.

George in true crofting tradition has more than one job.  He also manages the 1100 acre Ardross Castle Estate, a cereal and cattle enterprise which runs pure Aberdeen Angus cows and uses a Limousin bull on heifers.

George is a great advocate of Limousin cattle.  He said ‘I find them easy to calve and calves hit the ground running.  This is important to me because of my other job.   “Limousins are a robust and flexible breed proving to be great mothers producing fast growing calves which sell really well at Dingwall Mart”.  He also notes that ‘the Limousin cross cow is a top class replacement female which will cross to anything to produce good calves.  The type of Limousin bull provided by the Department Bull Stud is well suited to my croft ground producing a medium sized cow which milks well.  I find Limousin calves grow very quickly in the short grazing season up here.  I have been using Department bulls for over 15 years.  There is an annual hire charge which means there is no capital outlay and if there are any problems the bull is very quickly replaced.  If I had my own bull it would mean scouring the countryside for a replacement and with that the risks of bringing in disease.  The Department bulls come with the knowledge they have been tested and vaccinated for the key diseases and are semen tested.’