A Limousin sire has been used exclusively for many years on the commercial suckler herd belonging to Nick Tennant and his family. However, Nick’s lifelong association with the breed has recently notched up a gear, as he has been bitten by the pedigree ‘bug.’ Three females were registered under the Lissett prefix in 2011 and several others have followed, to fit in with his long-term goal of breeding high quality bulls and females. The pedigree herd now currently numbers 20 breeding females in addition to the 150 commercial cows. 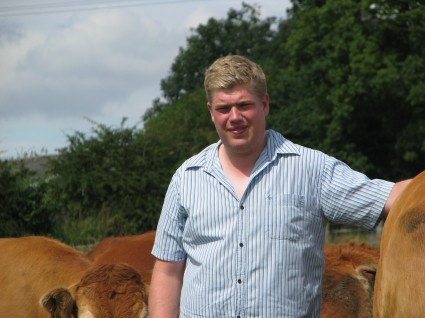 “You know what you’re getting when you breed your own cattle,” says Nick, who trades under his father’s name, James Tennant Ltd. “I only have 16 registered cows and calves at the moment and progress will be slow, because I will impose strict selection criteria. Anything which doesn’t come up to standard will be moved into the commercial herd.

“I like working with the cattle and going pedigree adds a bit of extra interest; it allows me to mix business with pleasure,” he says. “But it’s not simply a case of going out and spending money, every animal on the farm has to pay its way.”

Nick admits that it has taken some time to establish a “type” within his own herd. However his foundation females include purchases from the Bankdale and Redrock Dispersals and from the Haltcliffe Production Sale. At the Red Ladies Sale at Carlisle in 2011, he spotted Titchburn Flower, bred by Donal Murray of Newry, County Down, Northern Ireland. He paid 5,000gns for the maiden heifer, which was by Cloughhead Umpire and out of the Lino daughter, Annandale Alana.

In June 2012, Nick further added to his foundation herd when he paid 7,000gns for Haltcliffe Groovy at a sale in Carlisle. Another by Cloughhead Umpire, the May 2011-born heifer was out of the Penyrheol Sam daughter, Haltcliffe Veronica.

Having purchased a couple of outfits privately from the Homebyres herd in 2012, May 2013 provided the ideal opportunity for the Lissett herd to expand further and Nick purchased Homebyres Dinuette for 6,200gns. The five-year-old cow, which has a Beef Value of LM+41 and was sold in-calf, is by Homebyres Vanhee and is out of Homebyres Starlette. He also bought her heifer calf, the Wilodge Tonka daughter, Homebyres Howlette; she was offered as a separate lot and cost 3,600gns. 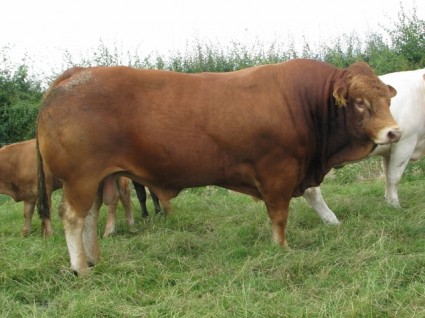 Further inspired by Homebyres breeding, Nick purchased a second in-calf cow with calf at foot combination, again put forward in separate lots. He bid to 4,800gns for Homebyres Effi, by Homebyres Vanhee and out of Homebyres Tansi. She was born in April 2009 and has a Beef Value of LM+31. Meanwhile, he paid 4,500gns for her Haltcliffe Eubank-sired calf, Homebyres Hiffi.

Nick describes his ideal cow as a “rectangular block with good legs and feet.” The ability to raise a good calf is also essential.

“A large-framed cow suits this farm,” he explains. “I am not looking for a ‘freaky’ shape and she must be upstanding. I also prefer my cows to be lighter in colour, as I believe they milk better.”

Until recently joined by the 20,000gns Norman Infusion purchased at Carlisle in February 2015, the main stock bull used on the pedigree herd has been Homebyres Felboy, which was bought for 13,000gns in 2012. Once used across the pedigree herd, these bulls will eventually be put across the commercial cows. Nick always studies the pedigree and performance of a bull’s dam, before making his selection. Herd sires must have good length, as well as “presence,” a quality which he finds hard to put into words. The squat, highly muscled bulls that store cattle producers favour are not for him, he says, as he prefers a taller animal.

The most recent addition to the Tennants’ battery of bulls is the 20,000gns Overall Supreme Champion from the Carlisle February 2015 Sale, Norman Infusion. Infusion is by Claragh Franco and is out of the Glangwden Bigboy daughter Norman Elsie. Commenting on the purchase, Nick Tennant desbribed his new acquisition as a typical modern Limousin bull, a good mover with a great second thigh, and from a very consistent breeding line. He will initially be set to work on the pedigree herd.

Nick also uses AI bulls on the pedigree herd, with synchronisation helping him with heat detection. Among the AI sires he has chosen recently are Huntershall Gladiator, Neuf, Bolide, Anside Flint and Dinmore Goldcrest.

Showing is another new venture and if Nick can maintain his success following his debut competition entry at Newark in April, then he will be extremely pleased. Lissett Hallmark, whose dam was purchased in calf, was Junior Bull Champion and Reserve Male at Newark. He was subsequently knocked down at 4,700gns to Gascoignes Group. Hallmark weighed 900kgs at 16 months and his flesh was lean, not fat, stresses Nick. Time is limited, but he has plans to attend a few local shows and has set his sights on the Great Yorkshire at some point in the future.

The Limousin is a great All-rounder

“The Limousin is a great all-rounder; the purebreds are exceptional, compared with other breeds, and it also produces the type of crossbred finished animal the market is looking for,” says Nick.

“There is nothing to beat it for good maternal and carcase traits combined. But I still maintain that the majority of bulls, even at the highest level, will favour one or the other, although a lot of people disagree with my view. The notable exceptions that spring to mind within the Limousin breed are Wilodge Vantastic and Broadmeadows Cannon; they have all produced tremendous males and females.

“As finishers, we are always looking for a happy medium and that doesn’t necessarily mean paying big prices; there are plenty of high quality, affordable animals coming on to the market. I’m prepared to wait, rather than spend a lot of money on impulse and I want to avoid falling for a bull which looks great in the ring but struggles to cope, once he is turned out with the cows.”

While Nick has always worked on the farm and been interested in the cattle, he completed a university course in business studies after leaving school. But the attraction of working at home convinced him to return in 2008 and he has been there ever since. The family farm is made up of just over 2,000 acres, most of which is down to traditional arable cropping, producing a plentiful supply of straw and feed for the cattle.

Running with the commercial cows are a further 4 locally-sourced pedigree bulls together with one of the first homebred Lissett bulls Nick has bred. The number of commercial cows has remained virtually unchanged at around 150 during the past 15 years. The introduction of the pedigree animals has swelled this slightly. The 150-strong commercial herd consists of Holstein cross Limousin cows, with some British Blue genetics. They go to one of the farm’s half dozen Limousin stock bulls, to calve in spring and autumn. Around 10 bulling heifers and 10 in-calf cows are bought in each year as replacements, although a home-bred heifer calf will be retained if her dam is exceptionally good. 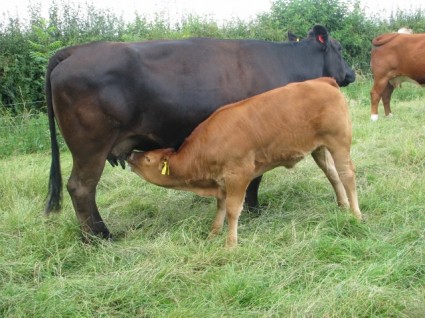 Finishing consistently at E and U grades

All the cattle are finished and sold deadweight to ABP at York, with bulls taken to around 15 months and weighing in at 450kgs. They are usually ready to go within 17-18 months, weighing 340-350kgs deadweight. Bulls will generally achieve U+ and E grades, with heifers at U and U-. The finishing diet for the coming winter will be based on home-grown rolled barley, a protein pellet and silage. The ration has included crimped grain for the past decade, but Nick has found it difficult to maintain a consistent quality during storage.

Those fields which cannot be ploughed or are prone to flooding are designated for the cattle and this includes 150 acres of silage ground. The grazing land is scattered over the farm, so it is quite a task to keep fresh grass in front of them, says Nick. It is made even more complicated because the pedigrees are in a health scheme and cannot be mixed with the commercials. The abundance of clover in one particular field is a welcome sight, but he is not certain why it has yielded so well.

“The field was used for silage but was struggling, so we used a Vaderstad drill to sow some white clover and then rolled it. That was four years ago; the clover has proved very persistent and we haven’t had any problems with bloat. However a similar approach adopted on another part of the farm has not been quite so successful.”

Nick is on the way to achieving his ambition to produce a consistent supply of good breeding bulls and he may also have a few pedigree bulling heifers for sale as early as next year.

“I am well aware that I have only just started on the pedigree side and that it’s going to be a steep learning curve. I have a picture in my mind of the ideal stock bull and I am working towards that. It would give me great job satisfaction if a commercial producer who’d bought a bull from me liked his calves and became a regular customer.

“Ultimately, it’s about keeping production costs down and achieving the maximum price for finished animals; these are the key factors which influence the profitability of a suckler herd.”