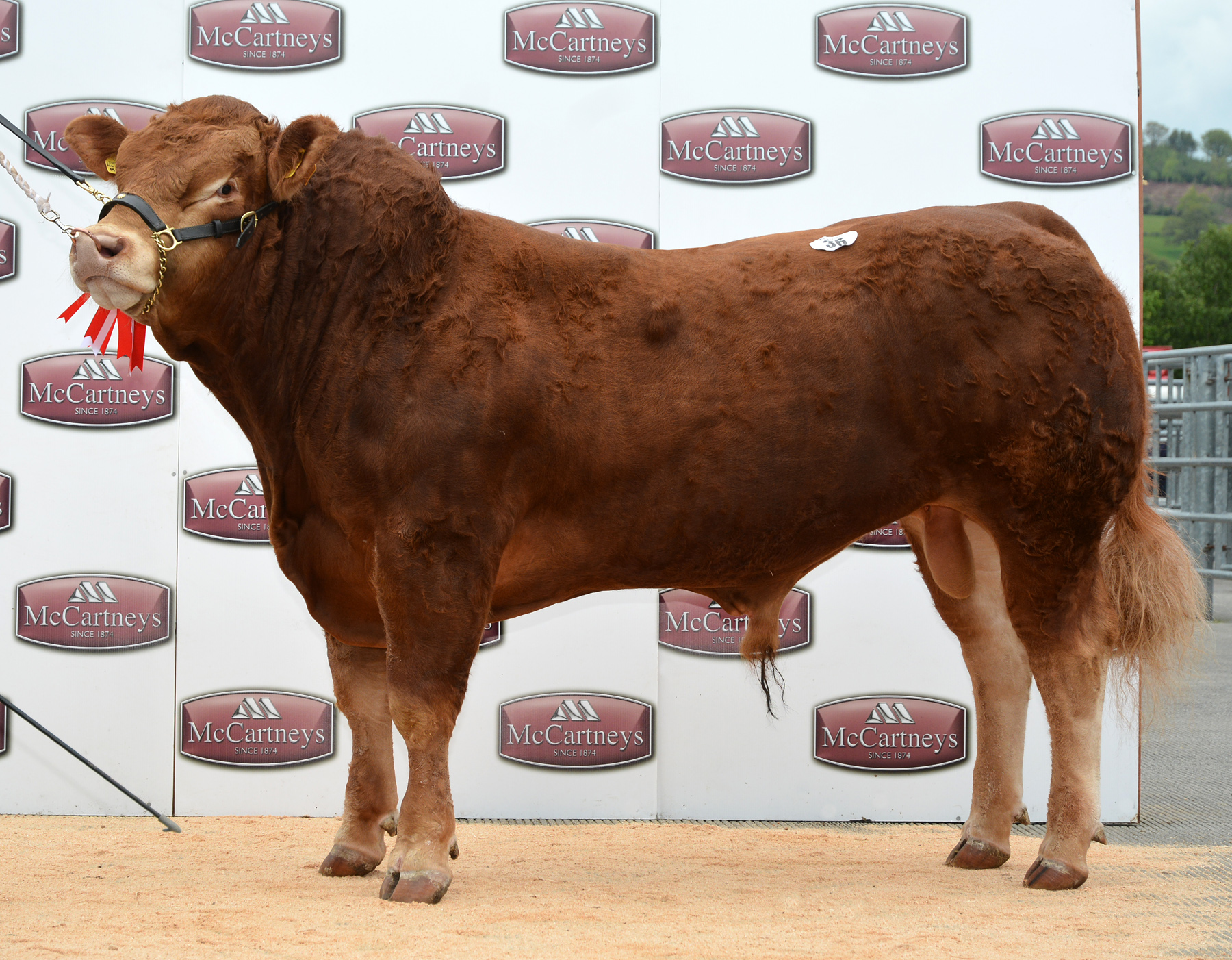 Michael and Melanie Alford, Foxhill Farm, Blackborough, Cullompton, Devon, kept up their prolific show and sale form when taking the 6000gns top price with Foxhillfarm Miami at the British Limousin Cattle Society’s May Sale held at Brecon Market on Saturday 13th May. For good measure their January 2016 born bull had also picked up the Supreme Championship in the pre-sale show under the judge John Mason of the noted Oddacres herd at Oddacres Farm, Embsay, Skipton, North Yorkshire.

Foxhillfarm Miami is an embryo calf by the noted Sympa and is out of the record breaking 125,000gns Glenrock Illusion. Purchasing the Champion and the top priced animal was KJ & LJ Jones, Sunnyside Farm, Narberth, Pembrokeshire. Commenting on his Champion the judge John Mason said: “This bull just stood out on the day. He was very correct, well grown, and had plenty of length. It was a good level show of mainly commercial type bulls, and the trade reflected this in what was a very solid sale”.
The Championship and top price at Brecon followed on from Carlisle the previous week where the Alfords sold the two top prices of 42,000gns and 35,000gns for maiden heifers, both out of Glenrock Illusion, and averaged over £11,000 for seventeen heifers in all. At the bull sale the herd also sold Foxhillfarm Manhattan for 35,000gns.

The sale at Brecon brought to conclusion a highly successful ‘fantastic fortnight’ of Limousin sales at markets across the UK that have witnessed a strong demand for bulls and females, fantastic clearances, and increased averages. Brecon very much continued this trend with a total clearance of the 24 bulls forward seeing an average of £4215 which was up by just short of £500 on the year.

Also at 5700gns, and highlighting a strong sale day for the herd, was Twemlows Laurence from W L & J A Forrester, Twemlows Farm, Higher Heath, Whitchurch, Shropshire. September 2015 born, Twemlows Laurence is by the AI sire Wilodge Goldcard and is out of Twemlows Foxtrot, a Sympa daughter. This bull with a Beef Value of LM+41 was bought by Shire Leasing, Amington, Tamworth.

In the pre-sale show another from the Forresters, this time Twemlows Lowry, had stood as the Reserve Supreme Champion. With plenty of breeding and performance figures behind him the September 2015 born bull is by the shapy AI sire Swarland Eddie and is out of the Haltcliffe Vermount sired Twemlows Finegem. With another strong Beef Value of LM+42, Twemlows Lowry was knocked down for 5600gns to M&JE Jones & Davies, Cwm Farm, Newtown, Powys.

At 4400gns was Dyfri Lewis from Messrs D G & M J Edwards, Home Farm,
Cilycwm, Llandovery. This September 2015 born bull is the first son to be offered at sale by the herd’s stock Bull Fenomen. With excellent performance figures including a Beef Value of LM+43 and a Calving Value of LM+3, Dyfri Lewis was bought by Morgan Brothers, Builth Wells, Powys.

The well-bred Dinmore Leonardo made 4200gns when selling for P Dawes, Kipperknowle Farm, Dinmore Manor, Hereford. An embryo calf, Leonardo is by the prolific Wilodge Tonka and is out of Carmorn Voney who has bred the Reserve Champion at the Royal Welsh Show. Purchasing this December 2015 born calf was IS Booth, Clapgates Farm, Haslington, Crewe, Cheshire.

Leading the sale of maiden heifers at 2150gns was another from was Twemlows Lulu, another from Will & Jackie Forrester. Entirely homebred Lulu is by Twemlows Dynamite and out of Twemlows Ulrika. Purchasing the top price female was PD&IV Pritchard, Wenllan Farm, Llagattock, Crickhowell, Powys.