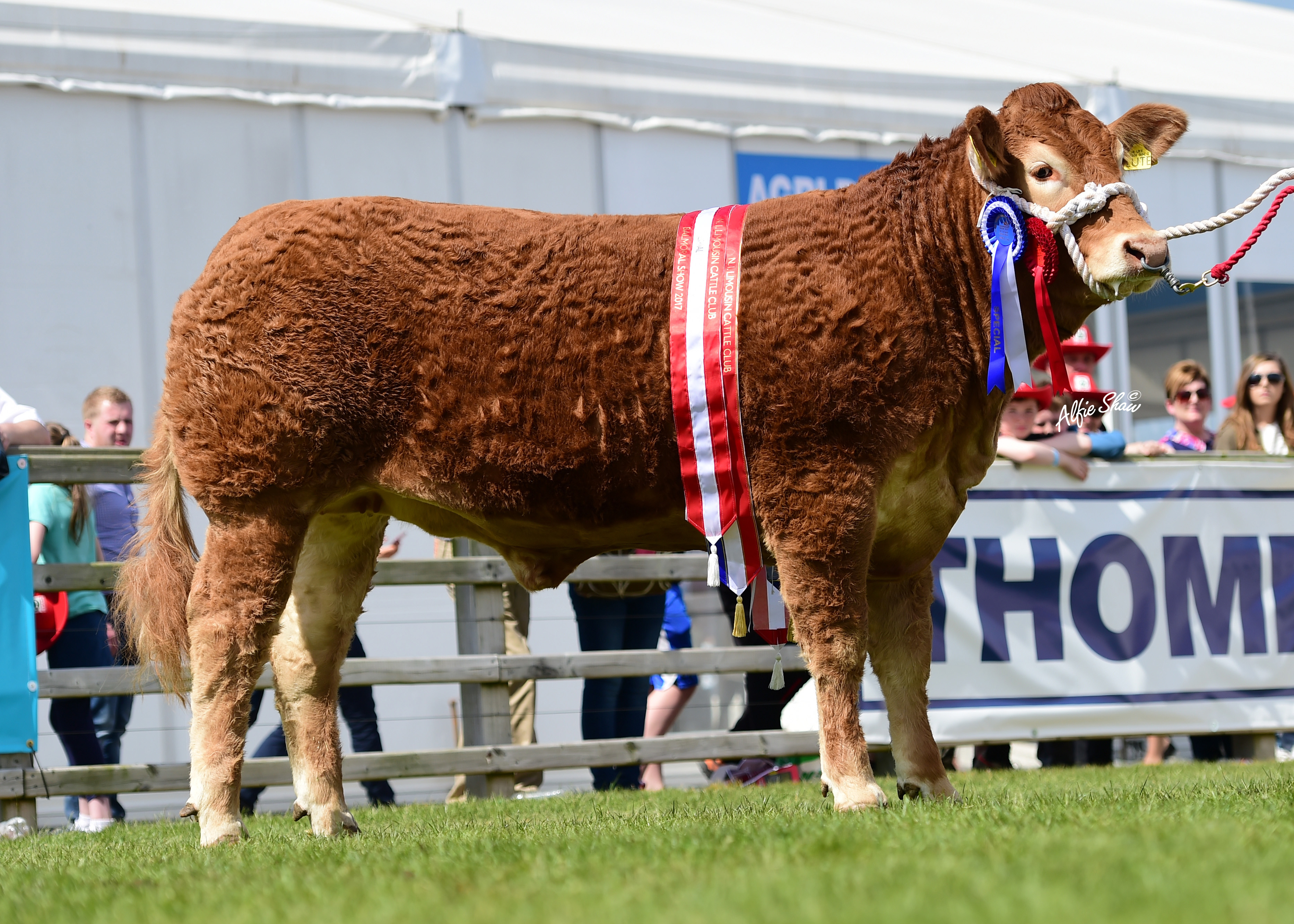 The 2017 summer show ‘major’ season kicked off in memorable and remarkable style at Balmoral Show, held for the first time over four days between 10th – 13th May, with an unprecedented title winning hall by Henry Savage & Sons with their Trueman Limousin team from 70 Skerriff Road, Altnamackin, Newry, Co Down.

From amidst some fine competition on a warm and sunny opening day the Trueman team emerged with thirteen out of fourteen possible Limousin Championships or Reserves.  Over the following three days, and head to head with the best in show of other breeds, a further six Interbreed titles was added to the haul including the show’s blue riband Overall Supreme Individual Interbreed award.    The prize winning haul is thought to be perhaps the most dominant show by one breeder, and one breed, at any of the modern day summer ‘majors’ including Balmoral, The Royal Highland, Great Yorkshire and Royal Welsh respectively.  Five Trueman animals took the titles between them with Peter & Serena Murphy of Carrickaldreen nipping in to win the Junior Limousin Male Reserve, Reserve Overall Male and Derriaghy’s David Green having last year’s winner, Glenrock Inclusive, within the winning Interbreed Team of Five.

The winning team of Trueman animals comprised of the heifers Trueman Lute, Melody, Madonna, and Minogue, along with the young bull Trueman Mozart.

In front of Limousin judge Michael Massie of the noted Elrick herd, Mains Of Elrick, Auchnagatt, Ellon, Aberdeenshire it was the stylish September 2015 born heifer Trueman Lute who came through a field of sixty-two Limousin entries to lift the Female Championship and Limousin Overall Supreme Championship.  After three previous Overall Reserves this was the first time the Trueman herd had secured the breed Championship title.  A twin to a heifer Trueman Lute is by the AI sire Haltcliffe Hitec, a Volcano son, who the Savages had seen and liked when being sold at Carlisle.  She is out of Trueman Foxtrot, a Wilodge Vantastic daughter, who is described as one of the three foremost females in the eighteen cow herd.

Come Friday, and the second day of the show, Trueman Lute strutted her stuff against her fellow breed champions before being given the highest accolade of Supreme Individual Interbreed Champion by the judge this time in the shape of the well-known Terry Coghill, Birsay, Orkney.

Following the Limousin judging Michael Massie said of his Champion:  “This was just a super heifer.  She’s very correct with a leg in each corner, she has a great top on her, a full body, and a lovely Limousin head.  There’s so much potential there and I’m sure that she’ll make a great cow.”  Of the Limousin show generally Michael Massie went on to say: “It was a very good show of cattle featuring some great class winners.  It’s easy to see the quality of the Limousin breed in Northern Ireland.  The stockmanship across the board was fantastic and I’d like to congratulate all the exhibitors.”

The show marked another landmark achievement for the Savage team of Henry Snr, Henry Jnr, Phelim, Benedict and Dermot.   In recent years Team Savage has sold the heifer Trueman Duet for 38,000gns, won the 2011 National Limousin Show with Trueman Euphonium, and in 2015 lit up the pedigree sector when selling the world record priced bull Trueman Jagger for £147,000!

Commenting Henry Snr said: “Each of these achievements has been fantastic in its own right but to win your home show and have such success in the Interbreeds and against the quality of cattle here is really something as special as it was unexpected.”

Of the herd’s breeding philosophy Henry Snr went on to say: “Our simple aim is to concentrate on the three or four best cows in the herd to produce the highest quality calves that we can.  In recent years those cows have been Trueman Euphonium, Indie, and Foxtrot.  We’re still a small herd but moving forward we are looking to increase in size but keep the emphasis on quality.”  Breeding of the influential Wilodge Vantastic was also evident through the team and featuring as a grandparent in all bar one of the Trueman cattle.

The May 2016 born Trueman Mozart is an embryo calf and is the first bull, and the first to be shown, by the aforementioned Trueman Jagger.  He is out of Trueman Honey who is herself a past Overall Reserve Supreme at Balmoral Show.  Aimed at the October Bull Sale in Carlisle, Trueman Mozart weighed in at 682kgs. Trueman Mozart picked up the prestigious Junior Overall Interbreed title again in front of Terry Coghill.

Nipping in to lift the Reserve Junior Limousin Male & Reserve Male Overall titles was the smart June 2016 born Carrickaldreen Maverick from Peter & Serena Murphy, Mullaghbawn, Newry, Co Armagh.  Another with a Savage connection, this young bull is by the 12,000gns Trueman Jukebox and is out of Sarkley Francesca, a Haltcliffe Ullswater daughter.  Francesca was herself purchased for the Carrickaldreen herd for 5000gns at the Sarkley herd’s production sale.  Moving forward, and keen on the mating, Peter Murphy aims to flush Francesca to Trueman Jukebox.  Carrickaldreen Maverick is himself another bull being aimed at the Carlisle October 2017 sale.  No stranger to show awards the presently ten breeding female Carrickaldreen herd has previously placed Junior Champion and Junior Heifer Champion at Balmoral whilst picking up major awards at the All Ireland Limousin Derby and Northern Ireland Limousin Championships respectively.

Trueman Melody sired by Ampertaine Abracadabra and out of Trueman Indie picked up the Reserve Overall Female Championship and was also Junior Female Champion and Reserve Overall Junior.  Melody is an April 2016 born maiden heifer calf who picked up the first red ticket of the day.  Taking first prize in the second class and lifting the Reserve Female Championship was Trueman Madonna.  An embryo calf Madonna is by Ampertaine Elgin and is out of the 2011 National Limousin Show Champion Trueman Euphonium.  This January 2016 born calf also featured in the winning Interbreed Groups of Three and Five as well as the winning Limousin Group of Three.

Last year’s Limousin Supreme Champion at Balmoral was Glenrock Inclusive from close local breeders Messrs DG Green & Son, Derriaghy Road, Lisburn, Co Antrim.  Originally bred by Stephen Illingworth, Lockerbie, the November 2013 born heifer was back in the 2017 prizes when she featured in the winning Interbreed Group of Five along with her January 2017 born heifer calf Derriaghy Noodles sired by Wilodge Tonka.  Glenrock Inclusive was originally purchased by the Greens for 14,000gns at the Glenrock Herd sale held in Carlisle in August 2014.  She is by the Nenuphar son Bremore Artist and is another embryo calf out of the renowned Glenrock Spangle.  The Interbreed Team of Five, a new competition within the four day format, was judged by Martin Ryan. The winning Limousin Team comprised of Glenrock Inclusive, Trueman Mozart, Trueman Lute, Trueman Madonna, and Trueman Minogue.

In the keenly contested Commercial Beef Championships on the Thursday morning it was another Championship for Limousin sired cattle before the judge Drew Hyslop, Boquhan Home Farm, Kippen, Stirling.

1st Trueman Melody born April 2016, by Ampertaine Abracadabra and out of Trueman Indie

1st Trueman Madonna born January 2016, by Ampertaine Elgin and out of Trueman Euphonium

3rd Trueman Minogue born January 2016, by Ampertaine Elgin and out of Trueman Euphonium

1st Goldies Liz born Jan 2015, by Goldies Fortress and out of Goldies Dynasty

1st Glenrock Inclusive born Nov 2013, by Bremore Artist and out of Glenrock Spangle

1st Trueman Mozart born May 2016, by Trueman Jagger and out of Trueman Honey