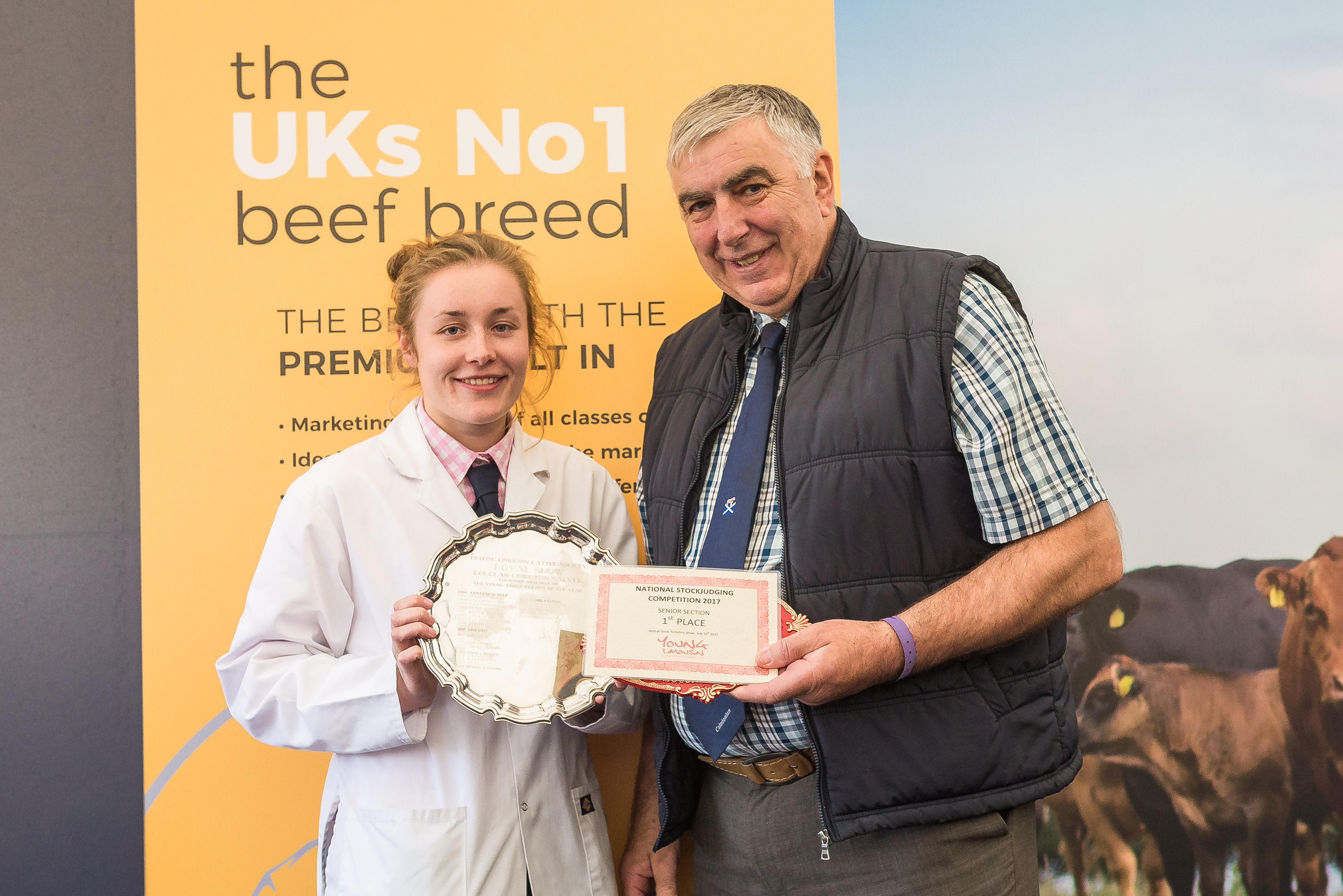 The Young Limousin Breeders Club held their annual National Stockjudging competition at the Great Yorkshire Show on Wed 12th July. Twenty two competitors judged 3 classes; young bulls, young heifers and commercial heifers. Each competitor gave reasons on the purebred heifer class. The master judge for the competition was Dennis Gall of Lockerbie, who also took and scored all the reasons, aided by John Graham of Burnbank. The competitors represented 5 different regions and ranged in age from 11 to 27

The overall reasons winner was Amy Lindsay, Kepscaith Farm, Scotland, who recited her winning set of reasons for the gathered audience at the prize giving. While Dennis Gall commented that Amy’s set of winning reasons were tremendous, he also congratulated all the top reason scorers.   Amy scored 48 in the competition to take top spot while James Graham took the runner up position with a score of 45. Jane Lindsay was best in the juniors with a score of 46.

The excellent reasons scores contributed to the keenly contested individual scores and Amy Lindsay came out top in the seniors with 170, followed by Ross Johnston with 168 and James Graham with 165. All three of these young breeders are from Scotland.

Taking the honours with the highest individual score in the junior section was Amy’s sister Jane, with the overall top score of 178. Second place went to Matthew Clark of the Northwest Midlands club who scored 155, and third spot went to Isabelle Mackley of the Northeast Club with a score of 149.

Best in the senior team event went to the pairing of Ross Johnstone and James Graham from Scotland, with a combined score of 333. Amy Lindsay and Iona Smith, also from Scotland, paired up to take second place on 327. Annabel Mason and Will Barker took third spot in the team event, with a score of 299; they were representing the Northeast club.

Jane Lindsay and newcomer Stephen Dale-Suley paired up to win the junior team event for Scotland with a score of 304. Matt Clark and new member Joseph Smith representing the North East club were second with a score of 300 while Andrew Hammill and Kile Diamond took third place with a very respectable 277, they represented Northern Ireland.

A big thank you to the Northeast Limousin club for their hospitality over the afternoon and for providing a bbq after the competition. The club would also like to thank Stewart Bett for helping to pick and get the classes out for judging and to Dennis Gall for so ably master judging the competition. Compliments are also extended to all of the Young Limousin breeders competing and everyone involved with the Club. Very much the future of the breed, the Young Breeders represented themselves well on the day and the event was a high profile and vibrant part of a memorable show at Harrogate.