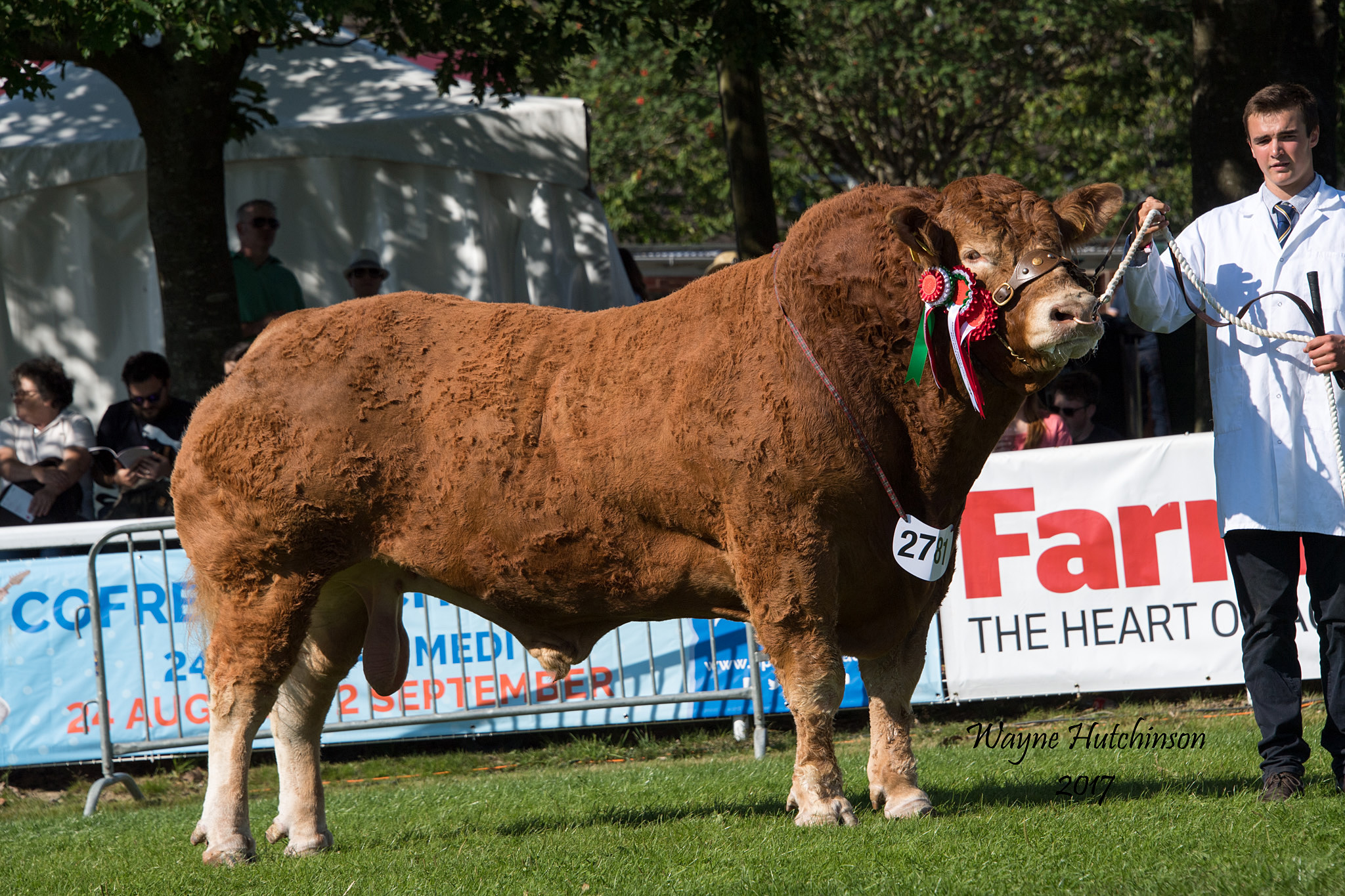 As is usual for late July all roads in Wales led to the showground at Llanelwedd, Builth Wells for this year’s Royal Welsh Show over 24th to 27th July.   With Agriculture maintaining its place at the heart of the show, livestock entries were very strong and Limousin cattle presented the largest cohort of any breed on the showground.

Day one of the show delivered spectacular sunshine to match the marvelous display of cattle from the Limousin breeders who had descended on the mid-Wales countryside. It fell upon Judge Mr Eric Norman, of the noted Norman Herd at Little Orton, Carlisle to sweat it out in the cattle ring as he deliberated over his judgments in the Limousin classes.

Having taken the honours as the Best Male exhibit early in the morning, as lunchtime approached, Mr Norman tapped the impressive bull Whiskey Infinity as the Overall Supreme Champion Limousin. Travelling all the way from Aberdeen, the four year old is jointly owned by Harry and Lynwen Emslie and a consortium of South African breeders under the company name of Meridian Genetics. The Emslies are no strangers to winning in Wales, having been Overall Limousin Champions with the cow Ballymoney Veronica in 2009. Sired by Plumtree Deus out of Wilodge Glitzy, Infinity is a combination of two very influential dam lines in the UK Limousin herd. His dam Glitzy is full sister to Wilodge Diamante, who’s progeny include the pre-sale show champion at the May 2017 Limousin sale at Carlisle, Wilodge Lookout. In addition to breeding Lookout, Diamante has also bred a range of successful heifers to 27,000gns, and her ET-bred sister Gem, bred Wilodge LJ, a recent addition to the Goldies Limousin Herd. On the other side of his pedigree line, his paternal grand dam Bankdale Amber is full sister to the prolific Bankdale Alice, queen at Foxhill Limousins.

At the Society’s barbeque in the evening of the first day of the show Mr Emslie was clearly overjoyed with the bull’s success, he commented that he was feeling humbled at the swell of compliments the bull had received during the day. Adding to the popularity of the winner was the fact that Whiskey Infinity had actually been bred in Wales, by Mr Dai Walters, of Duffryn Farm, Usk. As such, he became the first Welsh bred Limousin Champion at the Royal Welsh Show since Rhonllwyn Vandal in 2008.

The Female Champion in the Limousin judging was Messrs. Jenkinsons Whinfellpark Lavender, defeating Foxhillfarm Mammamia into reserve place. The April 2015 heifer is by the 26,000gns Gorrycam Hazzard out of the Lowerffryd Empire daughter Whinfellpark Holly. Lavender’s show career is shaping up to be a successful one already. She was part of the winning senior team at the Great Yorkshire show earlier this month, and was last year’s Junior Female Champion at the Highland Show.

In winning Reserve Overall Female, Foxhillfarm Mammamia, who was sold in the ring at Carlisle in May on the proviso that she would be retained by the Alfords for showing over the summer, piped her stable mate Foxhillfarm Miss World in the Limousin classes to the Best Junior Heifer prize. This added to her already fruitful season. Having reigned supreme at the Royal Highland Show earlier this year,and winning the Junior Interbreed Championship at the Great Yorkshire earlier in the month, 2017 has already shaped up to be an extraordinary year for the young heifer. On day two of the show, success in the Junior Heifer Interbreed Championship enhanced her 2017 haul of trophies. Judge Mr Andrew Ewing, Annan, Dumfries, commented that she had been an “easy winner” against the exhibits presented from the other breeds with “meat in all the right places”. As a calf, Mammamia was Junior Limousin Champion and Reserve Interbreed Champion at the ‘Stars of the Future’ show in November last year.

As with Mammamia, the Reserve Junior Heifer Champion Foxhillfarm Miss World also sold in the ring at Carlisle in May on the same understanding that she would be shown by the Alfords over the summer. Similarly-bred to Mammamia, this stylish heifer is also an embryo calf out of Glenrock Illusion, the 125,000gns female world record price holder and by homebred 38,000gns Foxhillfarm Irishlad she has growth EBVs and a beef value in the top 1% of the breed.

Mr Norman tapped Cowin Meister into top spot as the best Junior Male in the Limousin judging. The January 2016 bull from Mr & Mrs Dyfan and Carol James is home bred from their Cowin Herd in Camarthernshire. With an impressive pedigree, he is by Machermore Augustus, son of the prolific bull Ronick Hawk and out of the Mas Du Clo daughter Cowin Golddigger. So impressive was Meister that Judge Mr Emyr Jones, Llanrwst, Gwynedd tapped him into the Champion position in the prestigious Junior Bull Interbreed contest on the final day of the show.

From a strong base the Limousin breed was again well to the fore in the other Interbreed competitions, taking Reserve in the prestigious Team of Five championship, and winning the Exhibitor Bred Pairs and Group of Three contests plus the Females of the Future championship.

As well as Whiskey Infinity and Whinfell Park Lavender, three heifers from the Foxhillfarm cohort, Looksthepart, Limited Edition and Mammamia made up the Team of Five. Keeping up a fine run in this blue riband Interbreed the Limousin team’s Reserve position followed on from Championship wins in the preceding three years.

Limousins triumphed in both Exhibitor Bred Interbreed Team Championships with lineups from the Foxhillfarm stable. Collectively the Foxhill cattle made superbly well balanced teams, either as a pair or threesome. The winning pair’s team of Limited Edition and Looksthepart took the bull Lordofthering with them into the Group of Three judging. Foxhillfarm Lordofthering scooped the Limousin Overall Supreme Championship at the Great Yorkshire Show. The May 2015 bull, bred by Mr & Mrs M Alford of Cullompton, Devon is now owned in partnership with Mr D Sawrij of the Swalesmoor Herd at Kedzlie Farm, Lauderdale. Bred out of the prolific Bankdale Alice, a Sympa daughter, whose offspring have collectively amassed a significant six figure value, this is the second year he has made his mark on the summer show circuit. In 2016 he stood as Junior and Male Champion at the Highland Show, Inter-breed Champion at Devon County, and Junior Champion and Reserve Male at the National Limousin Show.

Foxhillfarm Looksthepart was Reserve Female Champion and Reserve Overall Limousin Champion at the Royal Highland Show in June. Also home bred, the August 2015 born heifer is by Guards Boomer out of the multi-award winning Foxhillfarm Gracie, who won an unprecedented ‘triple crown’ of summer ‘major’ championships in 2013. Looksthepart was the reserve junior female at the Royal Welsh last year, and in what is turning out to be a successful show career this year she was Reserve Breed Champion at the Royal Cornwall show in early June, only giving way to her companion Foxhillfarm Limited Edition.

On the final day of the show, Thursday 27 July, the impressive Foxhillfarm pair of young heifers Mammamia and Looksthepart were triumphant in the Interbreed Females of the Future Pairs Championship.

In other successes at the show, Jim Bloom & Sons, Driffield, East Yorkshire, took first place in the Agri Lloyd Elite Junior Bull championship with their January 2016 born bull Scorboro Misterbig. To be eligible to compete bulls must have a Signet Beef Value or corresponding Breedplan Index greater than the breed average. Home bred, he is by Fenomen out of Scorboro Jig. Fenomen was imported from France, where his figures placed him in the upper echelons of the breed, after winning at the 2014 National Show in Limoges. He has since worked as the principal stock bull in the joint owner’s herds at Scorboro and Dyfri. An exceptionally correct and sound bull, with great muscularity and length, Judge Mr Neil Barclay, Banchory commented that he selected the bull as champion for his “impressive power, stature and style”.

It was fantastic to see the young handlers in the ring competing for the Interbreed Young Handler Championship. The breeders of the future, such competitions give them the opportunity to showcase their stockmanship to the fullest. Nominated by the Society, twins Archie and Lottie Hill from the Quaish Herd, Cheddar, Somerset were victorious in front of Judge Mr Neil Lloyd from Leominster. This added to what had already been a successful show for the Hill family as their duo of heifers, Quash Livingthedream and Lucky had taken the honours in the Limousin Pair’s competition and with the addition of Quaish Lottie Reserve in the Limousin Team of Three contest. All home-bred by the Hill family they are no strangers to success, particularly in the South West. In June Mr Hill exhibited cattle at his 37th Royal Bath and West Show, an event his family has won the Inter-breed Championship at on several occasions. Both August 2015 born females Livingthedream and Lucky are by Culnagechan Giants Causeway out of Quaish Unforgettable and Quaish Diamond respectively. The slightly older female, May 2015 born Quaish Lottie, is by Branceille out of Quaish Evie, who had a successful show career of her own.

At the Club barbeque the LBV Thomas award for the Best Exhibitor Bred Female, owned by a breeder residing in Wales, was presented to Mr Gareth Morris for Dylans Magners. Gareth farms his Dylans Limousin herd in Llanwern, Brecon. The June 2016 born heifer, who had won her class in the Limousin judging earlier in the day, is out of Dylans Fanta by the noted Swardland Eddie who is known for breeding top show cattle, both pedigree and commercial.

In the highly competitive Commercial Championship, as would be expected, Limousin genetics were very evident throughout the entire judging session, which was overseen by Mr Elfed Williams from Sennybridge. The majority of the cattle he tapped into winning spot in the classes featured Limousins as either sire or dam. A May 2016 born Limousin steer from Mr Tecwyn Jones of Conwy took first place in the exhibitor bred contest.

To view a video of the judging, please click here.