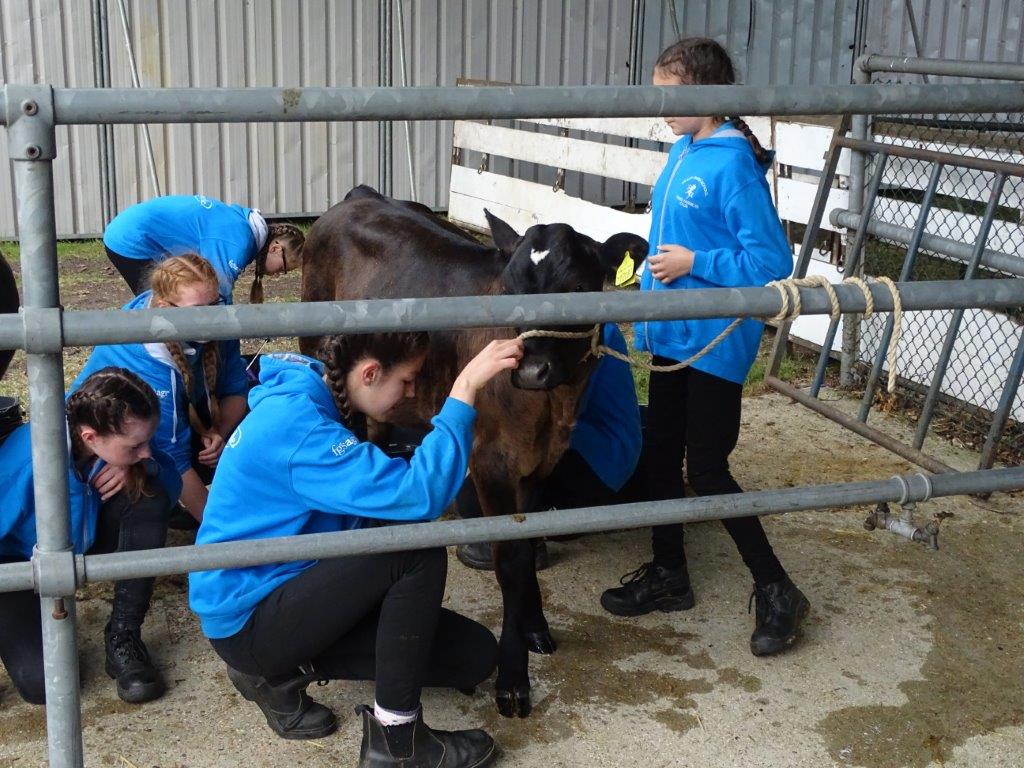 The Society was delighted to hear that the children from a school Young Farmers Club in Kent were using its website as a study tool. Taking inspiration from some of the images on the website, the students used photos of Limousin cattle as the backdrop to their cattle lines at the Kent County Show back in the summer last year. One lucky student, Byrony Noble, was chosen to take custody of a calf destined for the show when it arrived on the school farm. In this article she gives her own account of how she handled the responsibility and what happened at the show.

On the 14 February 2017, our Limousin cross Friesian calf was born. We named her Valentine because of the day on which she was born and the fact that she had a white love heart on her head. She arrived at our school farm a week later and became the only Limousin calf on the farm.

I was so happy to be chosen to look after her. I had to give her milk in the morning and afternoon, bed her up every day and stay in her pen so she could become familiar with me. A week after her arrival I took her outside on a halter for the first time. As expected she was very jumpy and skittish, but she soon got the hang of it. I trained her to walk on the halter every afternoon and at the weekends with the aim of getting her ready to be exhibited at the Kent County Show.

After walking her a few times I tied her up and started to clean her hooves, something she did not like at the start as she kept kicking out! As she got a little older and with spring arriving I was able to give her a full body wash for the first time. With the upcoming how in mind, this is something else she would have to get familiar with.

It wasn’t just Valentine who had to prepare for the show. I had to learn a huge amount about how to care for Valentine, including how to mix her milk correctly. On 7 July at the Kent County Show Valentine made her debut in the show ring, her handler, Young Farmer Kiera Wells, took her out in the Beef Conformation class. Kiera did well in showing Valentine and was placed fourth in the class.

Another student, Gracie Choppen-Parker took her out in Market Class the following day, where her knowledge was tested. In what was her first ever show Gracie performed very well and took home the fifth place rosette. Day two of the show was also my opportunity to get in the show ring with Valentine in the Home Reared class. It was a long and intense process; all the Young Farmers were questioned on how they had reared their calves. After much deliberation by the judge, I shook her hand to take my first rosette of the show, another fourth place.

On the third day, with one class remaining, all our attention turned to making sure both Valentine and I was turned out impeccably. She was washed and brushed again, amid some tough competition we were placed in sixth place.

After a hectic few days as the show I am sure Valentine was glad to be back on the farm. She spent the summer on a neighbouring college farm before heading to a store cattle sale in the autumn. For me, I was delighted to have been given the opportunity to look after Valentine and the show experience was fantastic. The team helped the school’s Young Farmers Club win a grand total of 96 rosettes this year and I can’t wait to do it all again next year.