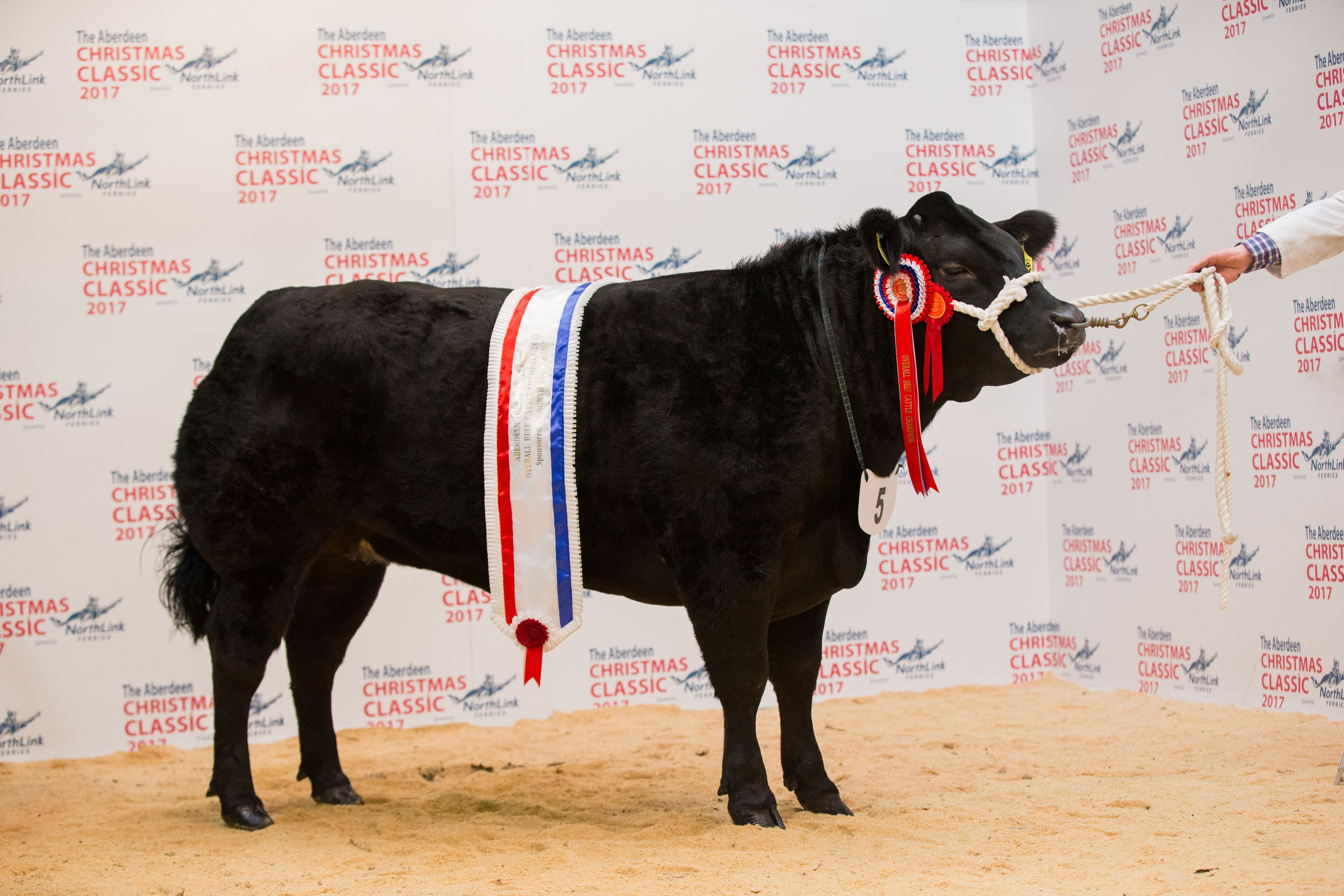 It was a memorable day for Harry Brown as he scooped his first Championship with a home-bred animal at the Christmas Classic at Thainstone. Making her show debut the April 2016 born Spicy is among the first crop of prime calves sired by the new stock bull, a Garyvaughan Limousin bull, at Auchmaliddie Mains, Maud.

Spicy weighed in at 620kg and was snapped up for £4,600, or an impressive £7.42 per kg, by the Judges, father and son butcher team, James and Ross Allan of Malcolm Allan, Larbert, Stirling. Speaking about their Champion and purchase James described her as “tremendous all round with a great top and gigot, very showy and flashy, and that’s what the Christmas Classic is all about”

With Alan Hutcheon at the gavel in what would be his last time selling cattle at the Classic ahead of his retirement the Butchers Champion from young brothers Andrew and Reese Simmers was second in the trade stakes. Also on her first outing, their 17-month old heifer Ruby Red, by a Limousin cross stock bull, was bought as a calf at foot with her Limousin cross mother. Crossing the weighbridge at 546kg she was knocked down to Huntly butchers Charles and Gary Raeburn for £3,800 or a solid £6.96 per kg. James Allen described this heifer as “perfect for the modern butchery trade”.

Fetching £3,300 or £5.63 per kg in selling to Alastair Bruce, Fraserburgh, was the Reserve Overall Champion from Murray Rainnie, Loanhead, Aboyne. This 586kg three-quarter Limousin was bred by the McMillian family, Ardberg, Islay and bought at the spring calf show on the island. She too was being shown for the first time, but was a half-sister to Murray’s reserve heifer from 2016 bred in the same place.

Three lots made £3,000 each with the first being the Reserve Butchers Champion from Wilson Peters, Monzie, Crieff, who was fresh from his win at LiveScot. Another Limousin cross heifer Tricky Treacle, sired by the privately purchased Anside Hawkeye, had been no stranger to success this year having taken reserve at several shows over the summer. She scaled 518kg and was snapped up by Louise Forsyth, buying for the family’s butchers shop in Peebles.

Both the Young Farmers Champions and Reserves matched the £3,000 mark. The former was from Mark Robertson, Easter Fodderletter, Tomintoul with a 640kg Limousin cross heifer Mia bred by Gordon Carrol, Edendiach. By a Limousin sire out of a Limousin cross cow Mia was bought for less than half the price in the spring and has done well on the summer circuit. She was knocked down to the Young Farmers Cattle Judge Jamie Scott of John Scott Meat, Paisley.

Reserve was a heifer from the Keith Commercials team of Richard Davidson, Craig and Jack Hendry, Darren Davidson and Kyle Cooper. Bred by Brian Harper, Greenwells, she went home for breeding with fellow Keith young farmer Bradley Robertson who is building up his own commercial unit.

The best bullock was a 688kg Powerful Irish son from Darren Irvine, Braehead. Having shown successfully over the summer including coming fourth at the Highland Show he made £1,700 selling to James and Ross Allen. The prizes kept coming for Harry as he also secured the reserve bullock title with Franz, a Limousin cross bullock bought in the spring from Frazer Leslie, Odinstone. Franz went onto realise almost £1,630.