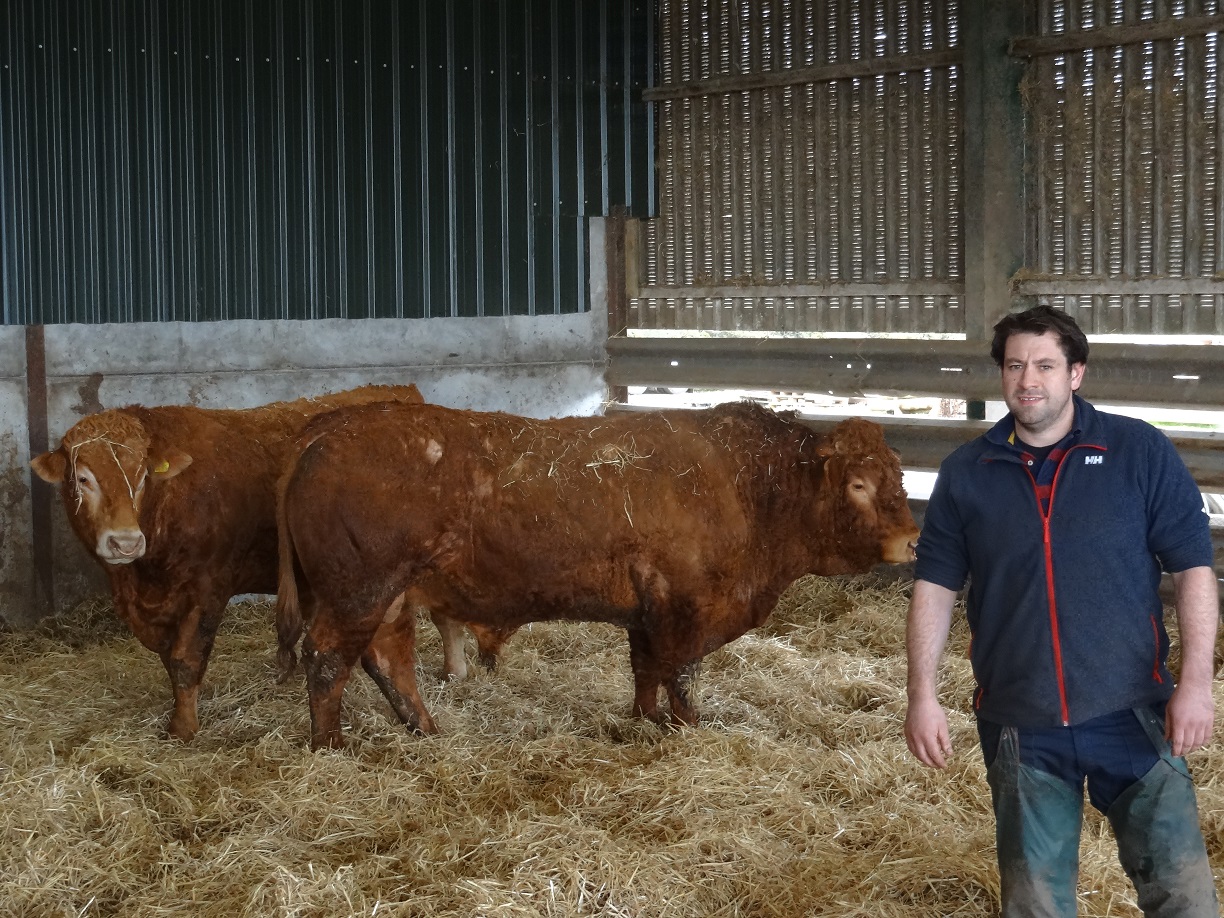 Limousin genetics are fundamental to the success of a large commercial suckler herd at Donald Fraser’s Dunain Mains Farm at Inverness.

Donald and his father, also Donald, farm 3000 acres on Dougfour Estate, about 1000 acres lies along the banks of the Caledonian Canal all the way from Inverness to Loch Ness, while the hill rises steeply to 2200 feet. 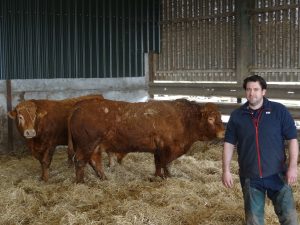 Donald senior has a fleet of lorries, so management of the farm is left to Donald junior, with the help of a couple of men who double up as tractormen, stockmen and lorry drivers. Donald also has his own HGV and sometimes has to help out on the transport side, while father Donald helps with the stock at busy times.

The stony and sandy low-ground soil is ideal for out-wintering cattle and Donald tries to keep as many cows outside as possible. This in turn helps with the fertility for growing 230 acres of spring barley, most of which goes for malting, but around 150 tonnes is kept for home-feeding.

Cow numbers are currently 225, split between 125 spring and 100 autumn calving. The vast majority of the cows are Limousin cross but a Simmental bull has also been used and recently Donald has bought a Saler bull. He said, “I do not want the cows to become too pure, three-quarter Limousin is perfect but I like the hybrid vigour the other breeds introduce and I have been very impressed with the Saler cross Limousin calves.”

Because he buys bulls with easy calving figures he tends to use the Limousin over the heifers, which at the moment are allowed to grow on and calf at two-and-a-half years old.

In the ten years since coming home from finishing his agriculture degree in Edinburgh, Donald has focussed on herd fertility with noticeable success. He has increased the minerals being fed to the cows in their ration and also boluses them with selenium and iodine which he believes has helped fertility levels.

There is plenty to do on the farm with arable crops, forage crops, silage, 800 ewes plus the transport business, so Donald does not believe in having extended calving periods. The bulls only go out with the November/December calvers for six weeks, but last year he achieved 95% scanning. The spring calvers get eight weeks with the bull. Bulls are also health checked and semen tested before being turned out with the cows.

Donald said, “I might give a first calver a second chance, but on the whole I do not let cows slip from herd to herd, I cull anything not in-calf, and between nutrition and management, fertility is really improving.” The tight calving period means calves are a good even bunch to sell as forward stores at Dingwall.

Limousin bulls have been bought locally from Alasdair and Gill Macnab’s Alagils herd at Dingwall and Donald said, “I am not a fan of the heavier bulls presented for sale. I like the fact Alasdair and Gill do not push their bulls; I can see them as youngsters and buy them in plenty of time to get used to their new surroundings before turning them out with the cows.”

Donald also appreciates the work that goes into performance recording the bulls. Alasdair and Gill are keen advocates of EBV’s and, while their bulls are mostly well above average for weight gain and carcase quality, they also offer good temperament and female traits such as milkiness, which Donald requires for his replacement heifers.

Alasdair said, “Donald has bought six bulls from us over the years and I feel that is a reflection on our breeding and also how we bring the bulls up. We find our bulls last a long time and are not over-fat. We spend a lot of time weighing and scanning for backfat and muscle depth, plus we think it is important that cows calve easily and that the calves grow fast with a high meat yield.”

Alasdair’s own commercial calves, bred very much the same way as Donald’s, have recently been sold to ABP, grading E and U and all either 3 or 3+.

Some of the bulls used on Donald’s herd include Alagils Juno by Netherhall Gallant, a three-quarter brother of Jambon which sold at Carlisle for 28,000gns in May 2016 to the Norman herd. Alagils Gatsby is a previous purchase which is a full ET brother of Alagils Gershwin which sold for 12,000gns.

Donald now has his eye on Alagils Libor, the Macnab’s current stock bull also by Netherhall Gallant out of Alagils Halfpenny and hopes to purchase him later this year.

About 60% of Donald’s herd is by Alagils bulls now and the genetics coming through in the cows are just what Donald wants, he said, “I don’t want my cows too big, around 700kg is fine. I expect them to average eight calves and still look fresh enough at the end of their breeding life to make a quality cast cow.” He added, “All the oldest cows in my herd are Limousin, there is never a problem with their udders and we only have to deal with about one per cent of the herd’s feet each year.”

Only the heifers are calved inside and assisted calvings over the whole herd are less than 10%, which Donald puts down not only to genetics, but also the extra selenium in the diet which seems to help the cows calve easily while calves are full of vigour and get a good start in life. 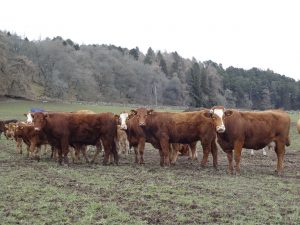 The winter-calving herd is outside although cows are run into a shed at night. Donald is not a believer in creep feeding but in order to take the pressure off the cows at bulling, he buys a tonne of calf pellets which he mixes with home-grown barley and feeds for the six weeks over bulling only.

Calves are weaned at the end of August and the cows go away to the hill. Once the calves are inside in late September/October, they are fed a total mixed ration (TMR) consisting of silage, draff, max barley and minerals. Donald works closely with Harbro on the nutrition side and with his local vet practice on the health side.

The best of the calves are sold in January at Dingwall as forward stores where the bullocks average 450 to 500kg and the heifers 400 to 450kg, while the remainder are sold in February. The calves are regularly in the top 10% of the sale and this year the best pen sold for just under £1200 per head. They tend to go to regular buyers locally, or in Aberdeenshire, and Donald receives good feedback about how well the calves go on to do.

The spring calvers are all out wintered on forage crops, except heifers, and rotated to fields nearer to the steading as they get closer to calving. Donald said, “Some of our fields are like an extra shed; the ground is dry and stony and they can shelter among the whin bushes or in the woods. I believe they are much healthier outside.”

Calves are weaned in September/October and sold in the spring at slightly lighter weights than the winter calves. This year, the 11 month-old bullocks sold at the end of March averaged 422kg and £2.51per/kg (£1055per/head.) The same age heifers averaged 395kg and £2.41per/kg (£951.95per/head.) A batch of forward 10 month-old bullocks sold for similar weights and prices.

Since coming home from college, Donald has not made drastic changes to the herd but he has tried to improve margins by improving fertility and calf losses and making better use of home-grown feed. He is currently unable to record and analyse the herd’s performance accurately but has applied for a grant to install an electronic weigh crate for the cattle. He said, “This will be an investment of around £25,000 but it will give me accurate information about which families are better performing. I also hope that by recording growth rates and weights I can start calving heifers at two years old.”

He has been using a full EID Ritchie combi-clamp system for the sheep which has worked well and helped him finish lambs either early or late to avoid the mid-season price slump.

Up until now he has retained around 35 heifer calves each year for replacements, but as fertility and management around the tight calving periods have improved, only around 10 are being kept this year.

Donald feels there is scope to tighten management up further in order to increase margins and feels it will be necessary to farm as efficiently as possible post-Brexit. He reckons his mixed farm would not be viable without support, but he firmly believes Limousin is the breed for the future, and is confident that, with continued improvement, his cows and system will give him the best possible chance in the post-Brexit world.

A female sale from the Westpit herd – Sale Preview