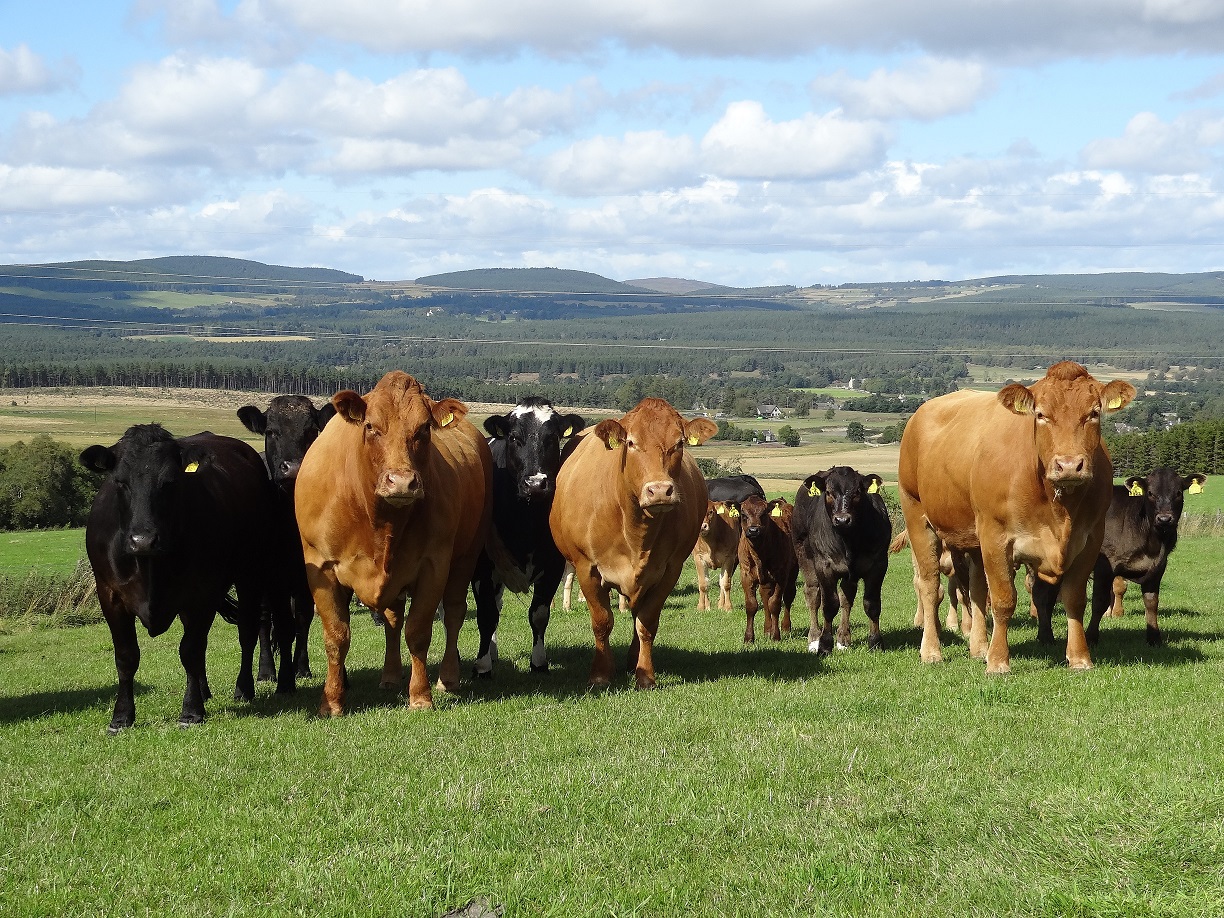 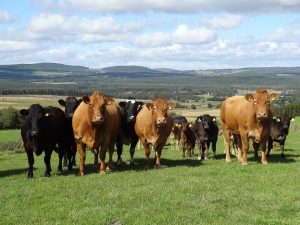 Situated in the hills overlooking the Strathspey Valley, Lethendry Farm at Cromdale in the Cairngorm National Park is a name synonymous with top quality commercial calves.

George (Dod) McConachie and his wife, Doreen care for 70 Limousin cross cows and ten replacement heifers which run on just over 200 hectares of the 800 hectare farm.

Dod explained, “My father came here in 1957 as a tenant farmer and over the years we have managed to buy the land. However Glenlochy Estate still have the shooting rights so, although some sheep graze the grouse moor, they are managed by the estate and we cannot graze cattle on the heather.”

The cows are nearly all home-bred, although Dod admits he cannot resist buying the occasional nice heifer at the market. While Limousin is dominant, he has used British Blue bulls through the herd on occasion to give the cows a bit of shape and also some hybrid vigour. He said, “I am careful to use the Blue bulls only on cows which have no Blue blood in them already, to avoid calving problems.” 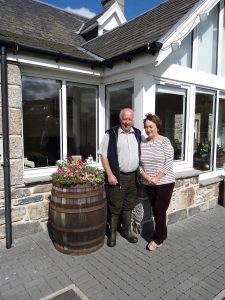 With Dod in his 70’s and only Doreen to help, it is very important the cows are easy calving and also that they have a good temperament. They both stressed that they would never keep anything that didn’t have a quiet nature, no matter how smart it looked.

The majority of the cows calve in the spring, with just 10 autumn calvers. Winters are long and cold in Cromdale, so the cows come inside with their calves on 1st November and start calving from 1st April before being turned out around 20th May when the grass has started to grow. They are wintered on a diet of home-grown silage, straw and pot-ale syrup, which is a by-product of the local distilleries. Dod said, “To avoid calving problems, it is important the cows are fit but not fat. I think cow condition has more to do with that than genetics, and, while I wouldn’t buy an extreme bull that is out in its shoulders, I don’t worry too much about ease of calving figures.”

There are three Limousin bulls running with the herd at the moment. Gunnerfleet Goldstar by the 15,000gns Haltcliffe Doctor, which was bought privately last year. His calves are on the ground now and the McConachies are very pleased with them. The second bull is the full French pedigreed Dolcorsllwyn Hellraiser bought at Carlisle in 2014 for 4000gns. He is proving to be very good for using on heifers. They also use an unregistered French bred bull bought privately two years ago which puts good shape on all his progeny.

Dod said, “Bulls have got to be correct with a good top line, head and legs. I have started to look at figures, but only if I like the bull in the first place. I think gestation length is an important ebv.” He laughed, “Doreen probably has a better eye than me, she usually wins at stockjudging and the Hellraiser bull was her choice and has turned out to be a good one.”

Previously Frewstown Breakdance was used extensively on the herd and has left his stamp on the females. He was bought privately from the Irvine family’s Anside herd. He sired many top price calves sold at Thainstone over the years for Lethendry.

Another bull to which many of the females in the herd can be traced is the home-bred Lethendry Nova by Ronick Gains. This was the first bull born to the newly fledged Lethendry Limousin herd in 1989. Dod explained, “Our children, Gary, Alan and Suzie were all interested in showing, so we bought a few pedigree females in the late 80’s including Joyces Judy, which was in calf to Ronick Gains. The result was Lethendry Nova, which won five championships locally and was kept as a stock bull.” 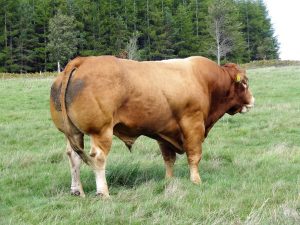 Nova sired bulls sold to a top of 5200gns for Lethendry Valmet in 2006 and was also the father of the champion group of three bulls at the Black Isle show in 2002. Other bulls from the herd sold to 7000gns for Lethendry Tolga by Anside Pilot.

Limousin has always been the only breed for Dod; his father, James bought one of the first Limousin bulls in the area in the mid 70’s and Dod said, “I like their shape, style and character, which they pass onto their calves, and I would not have any other breed.”

When the children left home, Dod and Doreen found the pedigree cattle too much work and incorporated them into the commercial herd. They like to keep life simple with all the calves, except for retained heifers and autumn-born calves, sold at the April store sale at Thainstone where they have taken the pre-sale championship many times.

Dod and Doreen enjoy keeping a couple of their best calves every year for Gary and Suzie to bring out at the Aberdeen Spring Show. In 2018 they took the male championship with the 396kg steer, Mr Muscle by the French bull. He sold for £1700 to the Black Isle.

The spring-born calves are creep fed from the end of August on Calf Starter before progressing onto a blend but once they are weaned from the cows in January, they are fed the same ration as the cows with some concentrate on top. They are much in demand with buyers at Aberdeen and Northern Marts and often the same people come back to buy the Lethendry calves time and time again.

Dod finds the Limousin cross cows long-lasting and said, “We often take 12 or more calves from them and we are still left with a cast cow that is worth something. They have good udders and feet and they produce a relatively low birth weight calf which is not hard on them but has the high growth rates we expect.”

While Dod and Doreen’s main focus on the farm are the cattle, they have also diversified into erecting a 20kw windmill. They are also part of an Agri-environment scheme for wetland areas, woodlands and hedges which means they cannot plough up any grassland before 1st July. Most of the grass is down to seven year leys and contractors come in and cut for silage every year to keep the cows going over the winter.

Many of the forestry plantations on the farm were planted by Dod over 30 years ago and are now ready to be harvested, while the heather moorland rising to the top of Cromdale Hill at 1500 feet is a haven, not only for grouse, but other wildlife.

The deep loam soil retains its moisture in a dry year such as this and, apart from giving cows and calves selenium and vitamin E, the soil seems to be nutrient rich. The herd is in a health scheme and BVD tested every year but Dod reckons that the beauty of his Limousin cross cows are that they are an easy-care breed in a simple system, which he and Doreen can easily manage on their own. 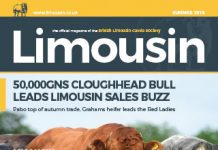 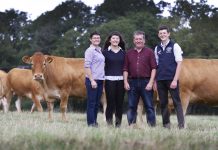 LIMOUSIN ATTRIBUTES TICK ALL THE BOXES FOR HEREFORDSHIRE BASED PHILIPS FAMILY 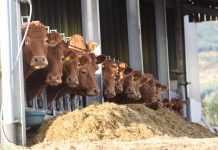