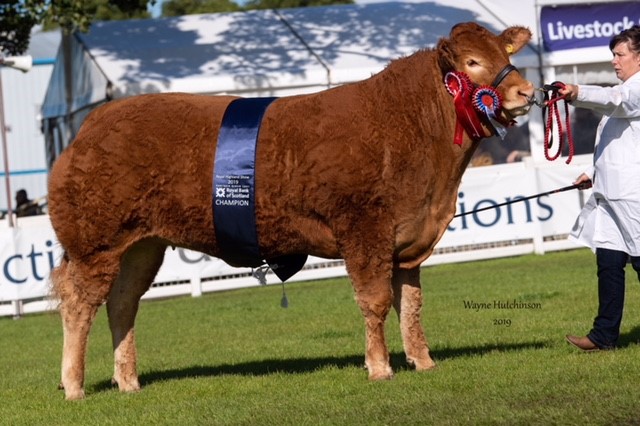 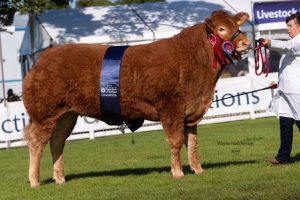 FEMALES WERE TO THE FORE of the Limousin judging at the Royal Highland Show on Thursday, 20th June, where, despite a cold wind and the occasional downpour of rain, a stellar show of stock was paraded in front of the judge, Chris Jerman, of the Glangwden herd of 100 cows near Caersws, Powys.

Mr Jerman was looking for an animal with size, power and shape, and he certainly found that in his Supreme Champion, Foxhillfarm Naomi from Mike and Melanie Alford’s herd of 20 pedigree Limousins near Cullompton, Devon. This daughter of the record-priced 140,000gns Trueman Jagger had only just turned two a month prior and has been unbeaten in her class in the show ring, most recently standing Inter-Breed Champion at Devon and the Royal Cornwall shows. Following on from her junior championship honours at the Royal Welsh Show last year, she secured the Alfords their fourth supreme title at Ingliston, having previously won with Foxhillfarm Mammamia, Foxhillfarm Jasper and Foxhillfarm Gracie. Naomi’s dam has a strong pedigree behind her too as the former show heifer is by Wilodge Vantastic and out of the prolific Bankdale Alice.

“The Champion has everything you need in a Limousin – power, shape, size and femininity,” said Mr Jerman, adding that the Reserve Supreme Champion was ‘something else as well’ and it was a close-run contest between the two.

That was the Reserve Female Champion in the shape of Gareth Small’s Strathearnred Oopsadaisy, just the second pedigree bred by Gareth and the first shown by him at the Highland having previously welcomed success with Limousin-sired commercial entries. Another Trueman Jagger daughter, this time born in January 2018, she also added the Supreme Junior honours to her haul and was echoing her success at Balmoral where she also stood Reserve Female and Reserve Overall on her only other outing. Her dam is Claragh Layla, a Vantastic daughter bought by Gareth for 18,000gns at Carlisle and one of only two breeding cows owned in Kilkeel, County Down, by Gareth.

The Whinfellpark team had plenty to celebrate, claiming the Male Champion, Reserve Junior Female and Reserve Overall Junior titles. Their male leader, which also stood Junior Male and Reserve Overall Junior, was Whinfellpark Oz, a 16-month-old bull which is among the first crop of calves by the 22,000gns Gunnerfleet Lion bought at Carlisle. Bred out of Whinfellpark Elite, a Wilodge Cerberus daughter, Oz was Reserve Supreme Champion at Ayr Show and Reserve Male at Northumberland.
Adding to the Whinfellpark kist-full of prizes was the Reserve Junior Female, Whinfellpark Olga, again by Gunnerfleet Lion and born in April 2018, this time out of another Cerberus daughter in the shape of Whinfellpark Flair. She also did well at Ayr and Northumberland shows, standing second at the former at first at the latter.

Landing a best result at the Highland were Jim and Andrew Gammie, whose Westpit Oban was Reserve to Whinfellpark Oz in both the Male and Junior Male contests. He nearly followed in the footsteps of his sire, Jalex Itsallgood, which the duo purchased privately when he stood Junior Champion at the Highland and which has since gone on to sire bulls to 17,500gns. On his show debut from the herd near Laurencekirk, Aberdeenshire, Oban is out of Westpit Harmony, by Netherhall Doubleoseven.