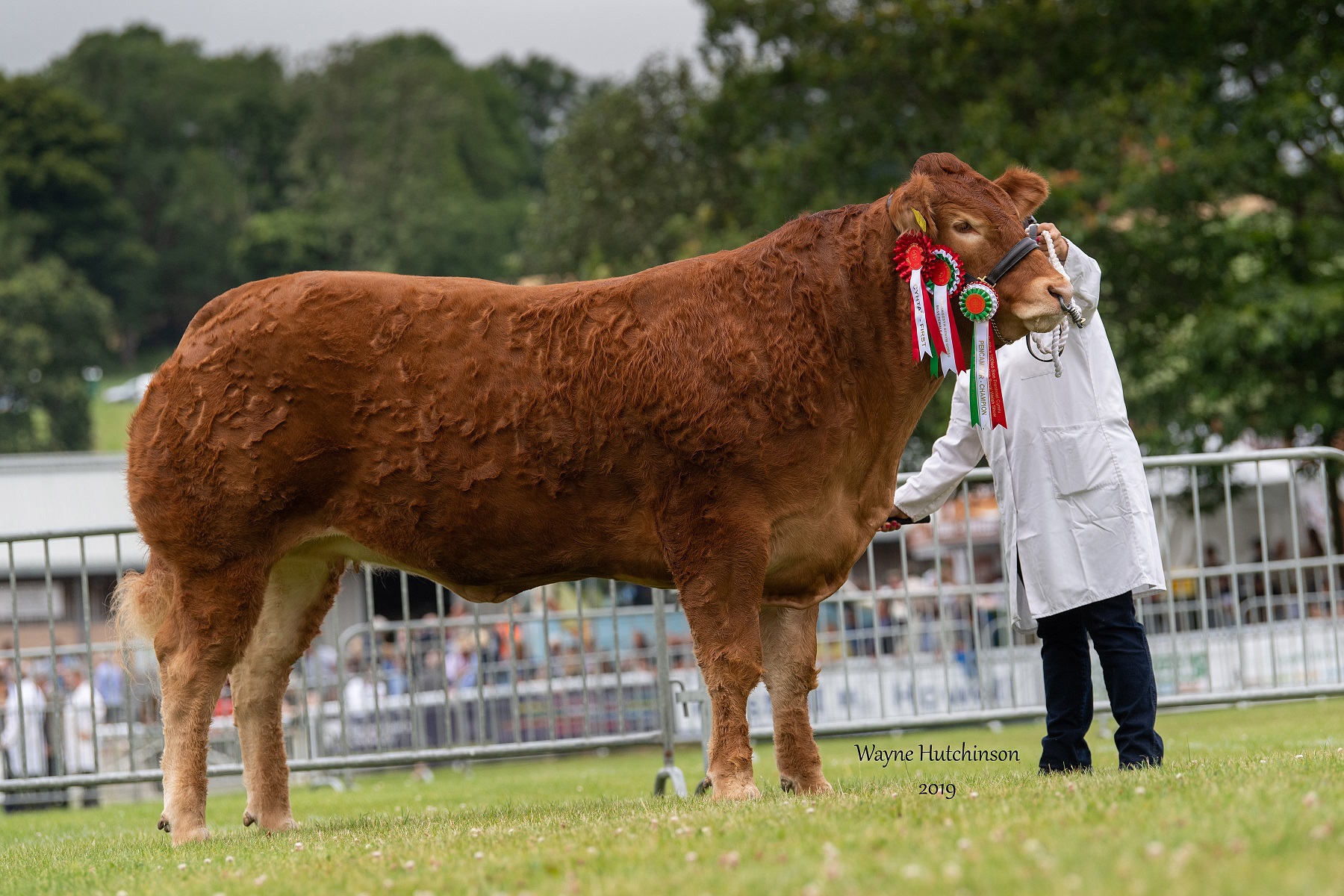 It was three times a lady for Foxhillfarm Naomi when she secured the triple crown of summer major show Championships in winning the Limousin Overall Supreme title at what was the 100th staging of the Royal Welsh Show, held at Llanelwedd, Powys on Monday 22nd July.  The defining win came at the end of a summer which had previously seen this May 2017 born heifer win the top breed titles at both the Royal Highland and Great Yorkshire Shows respectively.

The judge for the day was Andrew Burnett who runs the noted Spittalton herd of ninety breeding females at Upper Spittalton Farm, Blair Drummond, Stirling, and he was quick to praise his Champion: “This was just an exceptional beast with presence, width and style.  She was extremely well balanced, had a tremendous carcase and backend and will go on I’m sure to be a terrific breeding female.”

For the Alfords this was a second Supreme Champion at the Royal Welsh as well as a second Triple Crown and commenting afterwards Mike Alford said: “It’s a fantastic achievement to win two triple crowns and just something that you never think you could achieve when setting out in pedigree breeding.  Particularly within the Limousin breed there is so much competition and the best Limousins are very difficult to beat.”  Foxhillfarm Naomi also added to her haul of Interbreed awards when teaming up with Calogale Oxide to lift the Reserve Supreme Interbreed in the Fitzhugh Pairs.

It was a show to remember also for the Calogale herd of Gareth Lee and Catrin Lloyd, Kidwelly, Carmarthenshire with their April 2018 born bull Calogale Oxide.  Another sired by Trueman Jagger, and out of the homebred Calogale Lizzy, Calogale Oxide lifted the Champion Male, Reserve Supreme Overall, and Junior Male awards in the Limousin judging before adding the Supreme title in the Agri Lloyd Elite Junior Bull Interbreed, and the Reserve Supreme in the Fitzhugh Pairs.  The Limousin judge Andrew Burnett said: “The Male Champion was a bull with great character and length, and again had a tremendous width of top and carried plenty of style. He was well grown for his age and caught my eye straight away.”  The string of titles was the best achievement to date by the Calogale herd at the Royal Welsh Show who at the 2018 show won the Exhibitor Bred Team of Three Interbreed.  In 2019, this young herd still in its infancy, has also lifted the Senior Male Championship at Carlisle and an Overall Supreme award at the Welshpool Sale.   Following day one, and in some breaking news, Calogale Oxide was sold in a private export deal to the well known Ardnacrusha herd of Donal Maloney, Republic of Ireland, who saw the bull whilst attending the show.  The bull had provisionally been aimed at the October 2019 Carlisle Sale.

Trueman Jagger sired cattle featured heavily in the main prizes and this was carried on when Whinfellpark Nerissa from Messrs Jenkinson, Clifton Moor, Penrith, Cumbria, lifted the Reserve Female award and having placed second in her class to the Overall Champion and Female Champion, Foxhillfarm Naomi.  This January 2017 bred heifer is out of the homebred Whinfellpark Gazer.  Shown throughout the summer Whinfellpark Nerissa has featured heavily in the prizes and was part of the winning Interbreed Team of Four at the Royal Highland, and in the Reserve Interbreed Team of Four at the Great Yorkshire.

Lifting the Junior Heifer award, and also being a first prize winner in the class for heifers born between 01 January 2018 and 31 March 2018, was Garyvaughan Once, from CV Lewis & Sons, Buttington New Hall, Buttington, Welshpool.  This January 2018 born heifer is by Emslies Integrity and is out of the homebred Garyvaughan Lady, a Garnedd Gower daughter.  This was another best performance to date at the Royal Welsh Show for the Garyvaughan herd which comprises of ninety cows, and sixty in-calf heifers.  ‘One to win’ at the Royal Welsh Show is the LBV Thomas award for the best exhibitor bred female owned by a breeder residing in Wales and this also went to Garyvaughan Once.  The final icing on the cake saw this heifer place reserve Overall in the Junior Heifer Interbreed Championship judged on theTuesday morning by Mary Cormack, Dinmore Manor Estate, Hereford.

Back in the bulls and Tierston Master from Delana Davies, Tierson Farm, Steynton, Milford Haven, Pembrokeshire, took first prize in the senior bull class before going on to place Reserve Male Champion.  This April 2016 born bull is by Reddragon Ibiza and is out of Greenwell Frances.   A strong connection Welsh Limousins, Delana Davies is the daughter of Leslie Thomas who imported the first Limousin cattle to set foot in Wales.

Placing second in his class to the Male Champion, and going on to lift the Reserve Junior Male Championship, was the April 2018 born Westpit Orion from Andrew Gammie, Drumforber, Laurencekirk, Kincardineshire.  This bull is by Jalex Itsallgood and is out of Brockhurst Holy.

The commercial cattle dazzled the watching audience on Tuesday morning with an outstanding show of cattle in front of the judge June Dowie, Balluskie Farm, Girvan, Ayrshire.  Limousin cattle dominated the classes and Championships lifting the Overall Supreme and Reserve, and taking Champion and Reserve places in both the steer and heifer sections.  Lifting the Overall Supreme title was a pure Limousin heifer bred in North Wales.  Aptly named, the April 2018 born One and Only was shown by Glyn Williams, of Trawsfynydd, North Wales.  Sired by the AI bull Waindale UFO, she is out of a pedigree Limousin cow by Huntershall Filleppe.  Earlier this year, One and Only had lifted the Overall title at the NBA’s Beef Expo event held at Junction 36, Kendal.

Further updates to come as the 2019 Royal Welsh Show progresses.