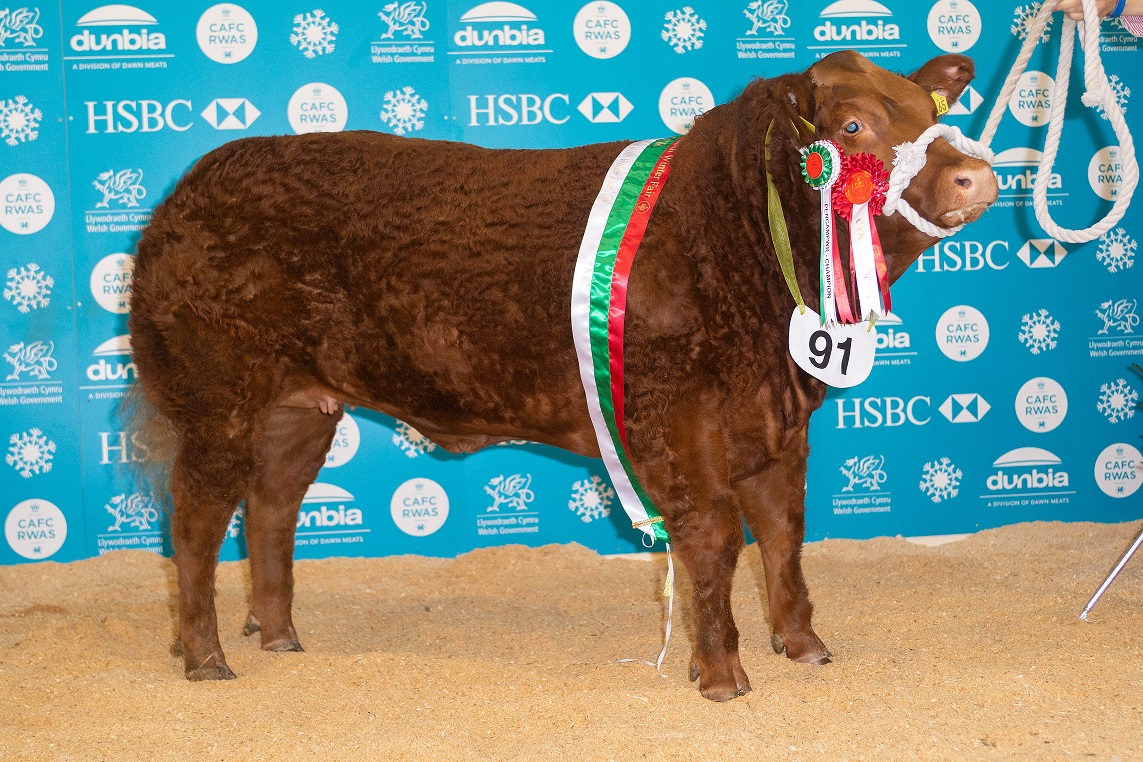 From a tremendous entry of cattle at the 30th Welsh Winter Fair held at Builth Wells, 25-26 November, emerged the Limousin-sired Supreme Champion ‘Rizzo’ from Messrs Wilkinson & Marwood, Ivy Farm Cottages, Leyburn, North Yorkshire which went on to sell for £10,800 to meat wholesaler Mark Webster at the post-show auction.

This victory was the culmination of a lot of hard work from the Marwood & Wilkinson partnership who bought Rizzo at Carlisle in March at the Borderway Spring Show of Suckled Calves where she stood Reserve Heifer Champion. June 2018-born, she was bred by P&A Jarman, Brow Top Farm, Branthwaite and is by Netherhall Jackpot. This red Limousin-cross heifer is bred from the same Limousin-cross cow that bred the 2016 Champion at the Carlisle Show, and had previously won her class at Beef Expo, Agri Expo as well as taking home wins at both Pateley Bridge and Nidderdale shows. Having been put up as Supreme Champion by joint judges Eddie Morgan & Dickie Wright, she topped it all by going under the hammer to Mark Webster for £10,800 later on the Tuesday.

Limousin and Limousin-sired cattle were strong in number and quality throughout the sections, with the stand-out probably being the 52 head over 6 classes in the Limousin crossbred heifers from where the eventual Champion came.

Beulah Otty bred by Mervyn & Jackie Price, Penycrug Farm, Llanafan Fawr, Builth Wells and brought out by father and son John & Ifan Phillips, Castellan, Penlon, Newcastle Emlyn had earlier taken the pedigree Limousin and overall pedigree titles before being crowned Overall Reserve Champion. The Phillips run the Silverstone prefix of five pedigree cows which was established in 2016 with the purchase of a Calogale heifer. The 553kg Beulah Otty was born 1st May 2018, sired by Gunnerfleet Hicks and out of the Ampertaine Foreman daughter Beulah Lotty, and had previously won her class at Agri Expo as well as remaining undefeated at all local shows. She will now head to the British Limousin Cattle Society’s premier Red Ladies female sale at Carlisle on 13th December.

The Reserve Overall Steer ‘Firecracker’ came from the Sarkley herd of EH Pennie & Sons, Gwern-Yr,Ychain, Llandyssil, Montgomery. Born in December 2018, and homebred, he had come through from the first of four Limousin crossbred steer classes comprising 24 animals and is by Waindale UFO and out of a Blue-cross cow. 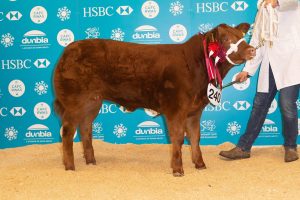 Reserve Champion Continental Baby Heifer was ‘Foxy Lady’ – another brought out by Chris & Nigel Pennie but this time bred by IP Jones.

Further awards went to Limousin stock. These included the Exhibitor-bred Champion in the shape of ‘Tequila’ who had stood first in the last Limousin-sired heifer class when brought out by Tecwyn Jones, Ty Newydd, Nebo, Llanwrst.

Purebred Steer Champion was Treloweth Odysseus from AMC Eddy, St Erth, Hayle, Cornwall. Born March 2018, he is a son of Tweedale Lennox and out of Treloweth Jupiter.