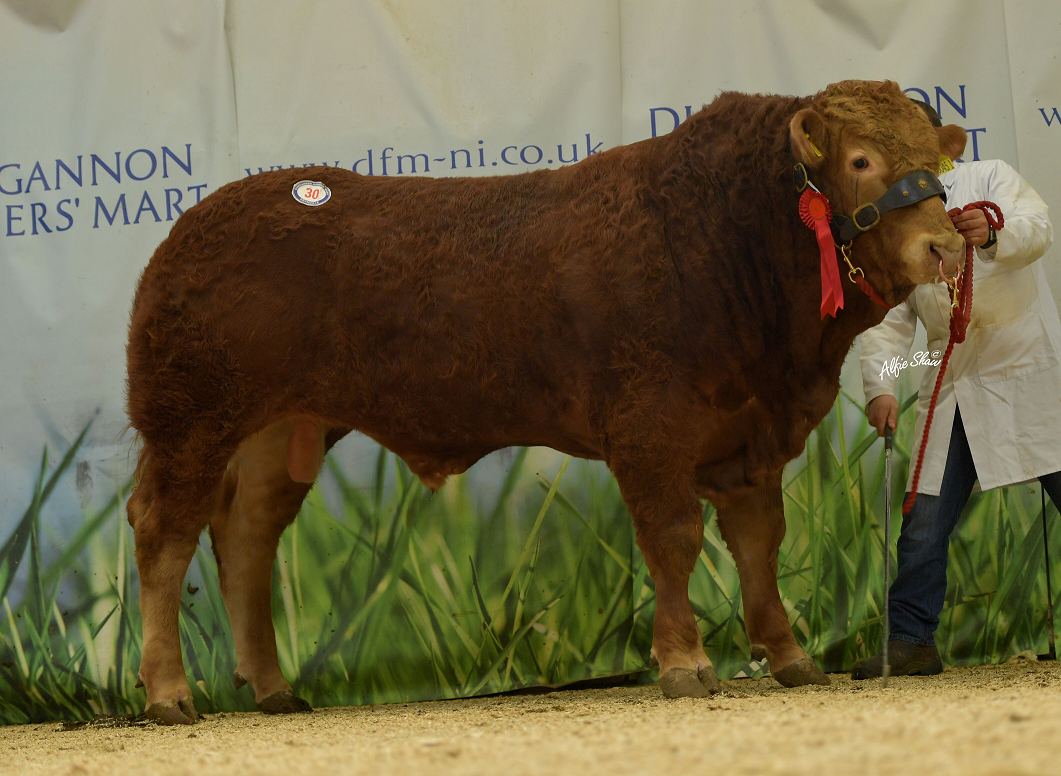 There was solid demand from commercial producers for Limousin bulls at the British Limousin Cattle Society’s autumn show and sale in Dungannon Mart on Friday 15 November 2019.

Leading the way in the sales ring and taking thetop price at 4,200gns was Killydunn Ozzy bred by Quinn Bros, Kilrea.  This August 2018 born bull is by Mereside Lorenzo and out of the dam Raffertys Fusty.  Ozzy was purchased by Richard Walker, Stewartstown, Dungannon.

At 3,700gns Ballyrobin Ocean bred by Joan Gilliland, Antrim, achieved the second highest price and at the pre-sale show earlier in the day was Senior Champion.  A February 2018 born bull, Ocean is by Lowerffrydd Empire and out of the homebred dam Ballyrobin Anastacia.  He was purchased by Patrick Rafferty, Forkhill, Co Armagh.

Junior Male Champion and selling for 3,400gns was Fairgreen OReilly from Thomas & Christopher O’Reilly, Madden, Keady.  This June 2018 born bull is by Wilodge Cerberus and out of the dam Carmorn Hatty.  McCabe Bros, Ballygally, Downpatrick are the new owners of this bull.

Selling for 3,000gns was Ballyrobin Oasis also from Joan Gilliland, Antrim.  This June 2018 born bull is by Netherhall Jackpot and out of the homebred dam Ballyrobin Earwig.  Oasis now heads to a new home with J & N Hamilton, Florencecourt, Enniskillen.

Also selling for 3,000gns was Craigatoke Olympus from Martin Conway, Plumbridge.  This May 2018 born bull is by Craigatoke Jack and out of the homebred dam Craigatoke Goodgirl.  Olympus now heads to Ballyshorrett, Downpatrick having been purchased by Craig Caven. Another from the same home was the Intermediate & Overall Male Champion, Craigatoke Octagon, by Mereside Lorenzo and out of the Plumtree Deus daughter Craigatoke Honey when selling to judge Liam Muir, Upper Onston, Stenness, Orkney for 2,400gns.

Castlerock Oliver, homebred by Louise Savage, Drumahoe, sold for 2,900gns.  Born July 2018, this bull is by Ampertaine Foreman and out of the dam Castlerock Glitzy, a Wilodge Cerberus daughter.  Oliver was purchased by Gavin Rowland, Crossmaglen, Newry.

Top priced female at 2,700gns was Ballyrobin Oriana, another entry from Joan Gilliland, Antrim.  By Lowerffrydd Empire and born October 2018, Oriana is out of the homebred dam Ballyrobin Hearsay, a full sister to Ballyrobin Gaza who was purchased by Ashledge Limousins for 8,500gns in Carlisle October 2012.  Oriana was purchased by Anna Clarke, Belleeks, Newry.

Selling for 2,600gns was the cow and calf unit Chinauley Joy and Chinauley Pete from Albert Finney, Banbridge.  This October 2014 born female is by Mas du Clo and out of the herd’s foundation cow Limo Viva who was purchased at the Greenmount College Limousin dispersal sale.  This lot was purchased by Mark McKinstry, Nutts Corner, Crumlin.

Ballyrobin Onsie also bred by Joan Gilliland sold for 2,100gns and was purchased by Mary Patton, Carrowmannan, Belleeks.   This June 2018 born female is by Netherhall Jackpot and out of the home bred dam Ballyrobin Lipsy.

Reserve Female Champion Barrons Orchid exhibited by K & S Williamson, Benburb sold for 2,000gns.  An April 2018 born female by Homebyres Jamie and out of the dam Barrons Fanciful, she was purchased by P Stewart, Garvagh, Coleraine. 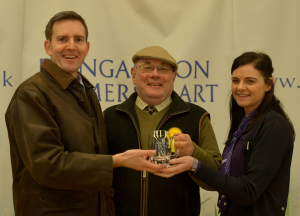