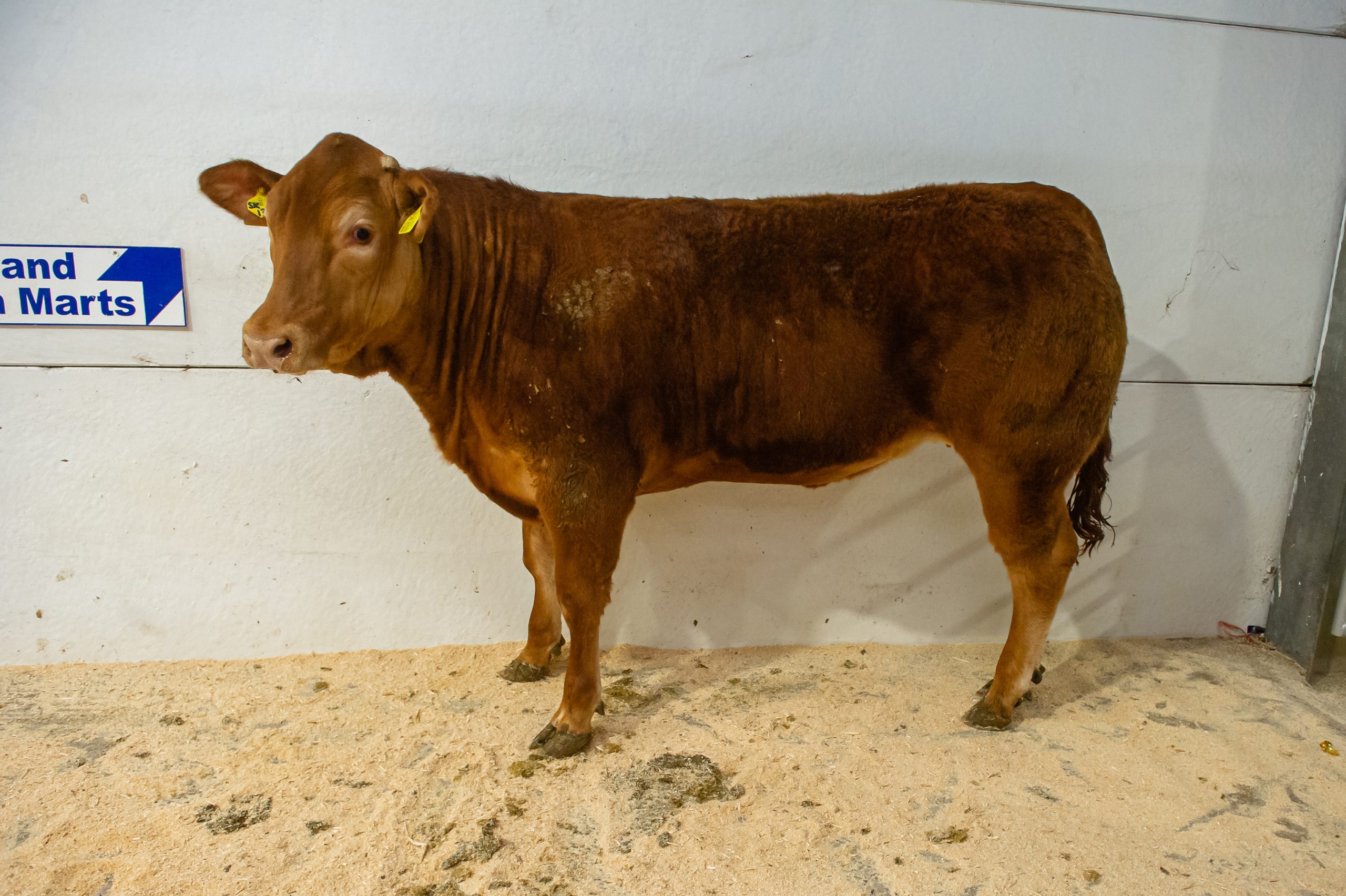 Hexham & Northern Marts at their weekly sale of store cattle offered a sound catalogued entry of 470 head which included 34 cattle as purchased by Members of Northumberland and County Durham Young Farmers Federations for the annual overwintering competition.

Due to the current ‘drop & go’ guidelines in place as recommended by The Livestock Auctioneers Association the company made the decision to cancel the show aspect of the greatly anticipated competition this year with concerns for the personal safety of our customers and staff being paramount.

A super entry of YFC calves were presented and as always the company are grateful for the continued support of the British Limousin Cattle Society, I’Ansons Animal Feeds, J S Hubbuck Ltd, Hexham and David Carr Haulage, High Wood, Hexham all of whom play a valuable part in the event each year.

With no prize show results to report the calves were brought into the sale ring at noon and the assembled crowd of regular buyers bid well to ensure all competitors saw fair return for their animals.

Emilia had purchased a very correct and shapely Limousin cross heifer from Brian Storey, Woodhead, Haltwhistle in October last year and obviously taken very good care of the beast over the winter as it sold for a straight five hundred pounds more than the purchase price of £770 with the hammer falling at £1270 in favour of regular purchaser at Hexham and one of the most longstanding supporters of this competition Mr Les Bainbridge, Seamer, Stokesley.

The greatest profit margins were as follows;

Top price within the competition was £1470 for an extremely correct, red Limousin cross steer exhibited by Emily Gray, Low Hall, Amble which she had purchased for £1120 from Messrs Reed, Lands Farm, Weardale leaving a nice profit of £350 for the Tritlington YFC member.

The company is delighted to host this event each year and invest in the stock men and women of the future and the auctioneers are pleased to report an average profit figure for the calves sold on this day of £301.47 per animal sold. We look forward to the start of the next competition which will begin in October and anyone wishing to take part should contact the auctioneers during the summer.

Besides the Young Farmers calves a more mixed show of cattle were presented across the catalogue however rates were certainly on a par with those seen in recent weeks.

The best end of older, forward sorts were sought after and topped at £1510 for a super hefty Limmy steer from Messrs Walton, Ogle Castle who sold six in total, three more at £1500 to then average £1480 for the load. Messrs Walker Bros, Satley sold another at £1500; a cracking Charolais cross steer and with a Simmental cross at £1475 saw an average of £1413 for their eight bullocks with size and scope from near Tow Law, County Durham.

Although the dedicated native breed sale will be held next week, the 19th March, a number of Angus were presented on this day and as ever, sold well. Dennis Burn, Aydonshields topped the male entry at £1450 and Mark Featherstone, Allendale Farm was close behind with the dearest heifer at £1430.

Cattle in the 11-17 month age bracket also sold well but these too were more mixed in terms of quality than last week. Messrs Browell, Quarry House scaled to £1380 for their best heifer by the Limousin sire and with a bullock at £1305 saw a worthy average for seven sold at £1219 per head. Robert English, Brownsleazes cashed a smart Blonde bullock at £1325 and Lance Robson, Sweethope sold his best Angus steer at 14 months for £1300 and with a pen of three at £1270 and a cracking Limmy at £1450 averaged £1309 for seven sold, all at the same age.

The third portion of the annual consignment from Messrs Sutherland, Ross Farms, Belford, North- Northumberland was brought down the coast and In-land to Hexham to great benefit. Well-bred Limmy steers at 12 months sold to £1265 and with Heifer sisters topping at £1050 for a smart trio a cracking run of 42 by the Limousin bull averaged £1013 throughout representing a lift just short of one hundred pounds per head on the year.

Cattle at ten months and younger still look to be dearest class when compared with older offerings and these too were more mixed on the day. Messrs Nixon, Stotsfold topped the bullock entry at £1170 for a smart pair whilst Messrs Moore, Highside continue a great run of form through the Hexham ring with heifers selling to £1125 for the Kellah based family.

Messrs Bell, Woodhall brought another great run of smart calves to Hexham and sold steers with shape and style to £1090 and heifers close behind at £1080 to average a pleasing £1022 for 22 sold at ten months of age with buyers-a-plenty for the quality sorts from Bardon Mill.

With weather taking a turn for the worse and the ever present straw shortage weighing on producers minds the auctioneers are confident that best value is increasingly attainable week on week through the ring at this centre. If you are contemplating selling store cattle of any class please contact our team who can advise on the best route to market to maximise your return.

Cattle 10 months and under