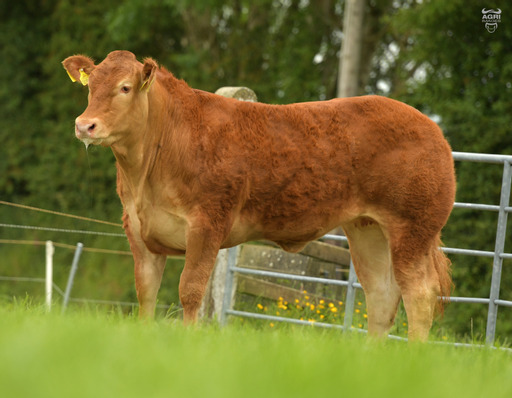 Provided by Trueman and Lynderg herds

The Joint Online Auction of the Trueman and Lynderg herds is causing considerable interest amongst new and established Limousin breeders as details unfold of the top genetics set to come under the hammer in the online sale taking place between 15th -17th July.

This auction will be held solely online via elite.pedigreesales.com, with Saturday the 17th being the key day as the bidding concludes on a timed basis from 1pm onwards.

Set to go under the hammer are 21 outstanding pedigree registered Limousin cattle comprising of 19 females and 2 young bulls. There will also be 3 lots of embryos and a recipient with a guaranteed pregnancy.

The Trueman herd of Henry Savage and family needs little introduction as it has excelled since its formation in 1997 notching up an array of show and sale successes including securing 140,000 guineas for Trueman Jagger at Carlisle. Most of the herd is built around the 40th Anniversary National Champion Trueman Euphonium, and this sale includes many lots that trace back to this matriarch. The Savage family had planned to offer a small number of females in the 50th Anniversary Show but as this had to be cancelled all these lots now form part of the Trueman and Lynderg Sale. Once again, this year progeny from Telfers Munster will feature in the Trueman offering, with the Savage family considering the stock on offer to be quite possibly the best they have ever presented for sale.

Their entry includes Trueman Rosanna, an exceptional maiden sired by Telfers Munster. She is a daughter of Trueman India who is a full sister to the highly regarded Trueman Idol and is a granddaughter of Trueman Euphonium. In addition to the top-drawer pedigree wrapped around this lot, Rosanna is an outstanding heifer with the potential to excel as a stock cow.

The Lynderg prefix of Jim and Joseph Quail was created in 1977 and has proved to be a driving force within the success story of the Limousin breed ever since. With over 120 years excelling as butchers, the Quails remained focused on breeding the type of Limousin cattle that the market demands and have considerable success at shows and sales throughout Ireland and the UK. The Quails invested in top genetics from France over the years and had a number of hugely influential stock bulls including Ocean, Napoleon, Dimitri and Lorenzo. Careful consideration was always given to female lines within the herd, and 2003 saw an importation of six top females to further consolidate the Lynderg herd.

One of the most recent highlights has been the homebred Lynderg Hero, who has an impressive track record in the show ring securing Championships and Reserves at Balmoral and Highland Shows respectively. His greatest success has been his progeny, which are exceptional. He has had sons sell to 20,000, 14,500 and 14,000 guineas.

The forthcoming online sale features a number of Hero progeny, from proven cow families within the Lynderg herd. These include Lot 5, “Lynderg Rembrant”, a very special prospect for those on the hunt for a new potential stock bull.

The hand picked Lynderg offering includes a number of tremendous heifers from the heart of the herd. These are mostly maidens with an in calf heifer also going under the hammer. In terms of quality and breeding, Jim firmly believes these are top drawer and will be excellent females for established and new breeders.

The sale will take place using the online platform Pedigree Sales http://elite.pedigreesales.com which is now live and carries all of the pedigree information for each lot, and is fully illustrated with a selection of photos and videos.

All potential buyers must register in advance of the sale. Bidding opens on Thursday 15th July at 7pm, with the first lot closing on Saturday 17th July at 1pm. All lots will be on a countdown timer following the conclusion of Lot 1.

Trueman Rosanna is an exceptional maiden heifer by Telfers Munster. She exhibits great muscling, size, and class. Her mother Trueman Indie is a full sister to Trueman Idol – a bloodline which has bred consistently well throughout the U.K. She is also a granddaughter of Trueman Euphonium.

Lynderg Rembrant is considered to be the most exciting Hero son offered for sale by the Quail family to date and is out of the tremendous stock cow Lynderg Galmira.

The Lynderg females represent the very best genetics from this high performing herd, the majority of which are sired by the outstanding “Lynderg Hero”