Home Homepage Headlines JALEX LIMOUSINS TAKE HOME THE HONOURS FOR THE SECOND YEAR IN A... 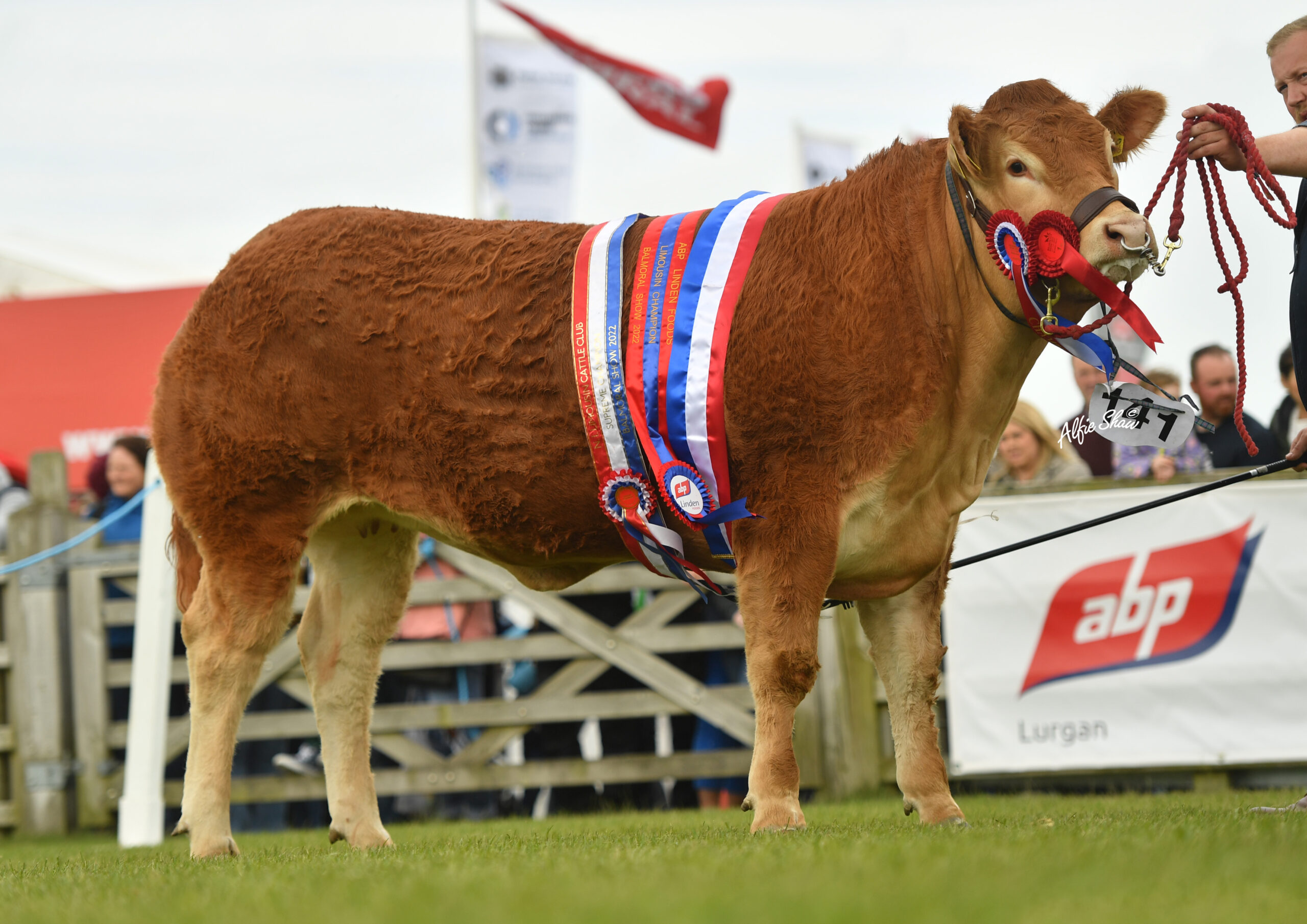 The 2022 summer show season kicked off in spectacular style at the 153rd RUAS Balmoral Show on Wednesday 11 May.  Day one of the show saw the Limousin judging in front of Mark Quick of the Loosebeare herd, Crediton, Devon.

From amidst some intense competition on a warm but showery day, Jalex Riri bred and exhibited by James Alexander, Randalstown, Co Antrim won the Overall Limousin Championship.  This was James’s second year in a row to win this coveted title.  Riri, a May 2020 born female is by Truemannatkingcole, a September 2017 born son by Trueman Jagger, and out of the dam Hudscales Gigi who also bred Jalex Nini that was Junior Champion at the calf bonanza in 2017.  Riri is scanned in-calf to Norman Ely. Having come through the field she followed up her class win by taking the titles Female Champion and then Overall Limousin Champion.

Judge Mark Quick commented “The Champion is a true limousin for the breed, she has an easy fleshing style and modern shape.  She is definitely an all-round show animal.”

Standing as the Reserve Overall Limousin Champion, having also taken the Reserve Female Champion title and no stranger to the Balmoral show lawns where she had great success in 2016, was November 2013 born Glenrock Inclusive with her heifer calf at foot Derriaghy Tinkerbell, born February 2022.  Inclusive is sired by the Nenuphar son Bremore Artist and out of the renowned dam Glenrock Spangles.  She was exhibited by D G Green and Sons, Lisburn, Co Antrim  who purchased her for 14,000gns at the Glenrock Herd sale in Carlisle, August 2014.

Overall Junior Champion and Junior Heifer Champion was Charlotte’s Sapphire bred and exhibited by Charlotte Martin, Dromore, Co Down who was exhibiting for the first time at Balmoral show.   Born April 2021, Sapphire is by Elite Forever Brill who was bred by Dan Tyan of the Irish Limousin herd Ardlea and out of the dam Roundhill Kmelodie bred by Doreen Corrigan of the Roundhill Irish Limousin herd.  The judge commented, “She is only 13 months old and her power is immense.  She has great volume and shape with a great head.  I’m sure she will go on to make a tremendous cow.”

Drumhilla Superstar bred and exhibited by Gareth Corrie, Newtownards took the Male Champion, Reserve Overall Junior Champion and Junior Bull Champion titles.   Born April 2021 Superstar is sired by Gareth’s stock bull Ampertaine Majestic and out of the 15,000gns Glenrock Northernstar.  He is a full brother to the 9,000gns Drumhilla Rambo who was Reserve Intermediate Champion at last year’s October bull sale in Carlisle.  Superstar won the N.I. Limousin Cattle Club’s 2022 Rising Stars Calf Spectacular in March and is now destined for further showing throughout the summer and will be aimed for the sales later in the year.

Reserve Male Champion and Reserve Junior Bull Champion was Nugent Supreme bred by Charles Beverland, Nugent Estate, Portaferry, Co Down.  Born March 2021, Supreme is sired by the 35,000gns Ampertaine Majestic and out of the dam Grahams Overlynice who is herself backed by show winning genetics as her dam, the Vantastic sired Millbrook Gingerspice, is a triple winner of Balmoral show. Overlynice was purchased by Nugent Estates for 8,000gns in Carlisle, May 2019.

The Limousin Pairs title went to two Jalex heifers, Riri who took home the Overall Limousin Championship title and Resta, born September 2020, also a daughter of Trueman Natkingcole and out of the dam Haltcliffe Hesta, an Ampertaine Elgin daughter who was purchased by James for 5,500gns in June 2014. Mr Alexander intends on taking Jalex Riri and Jalex Resta to the 50th Anniversary Sale in Ballymena on the 20th August 2022.

Over the following three days and going head to head with the best in show from native and other continental breeds, numerous interbreed titles came the Limousin way.

Well done to all Limousin exhibitors for the outstanding results at Balmoral Show 2022!

It was also a great day for the Limousin breed as Limousin sired cattle reigned Overall and Reserve Overall Champions in the Commercial Classes judged by Dafydd Lewis, Wales.

JCB commercials won Overall Commercial Champion with a black March 2021 born crossbred Limousin heifer sired by Mereside Lorenzo.  She was purchased in November 2021 at the Carrick-on-Shannon Fatstock Show and Sale for 4,000 euros and was bred by Cork Limousin breeder, Noel Sweeney.

Overall Reserve Commercial Champion went to Duffton, Small and Wilkinson with a February 2021 born Limousin heifer. This heifer is no stranger to the show ring, sired by Ampertaine Elgin, she was purchased in November 2021 at the Carrick-on-Shannon Fatstock Show and Sale for a record breaking price of 18,000 euros. This heifer was bred by Co. Laois breeders, Jack and Sean Ramsbottom.

Class 669 Cow or Heifer, in calf or with calf at foot, born on or between 1st January 2019 and 31st September 2019 and due to calve or have calved her first calf before attaining the age of 39 months

Class 670 Cow, born on or before 31st December 2018, in calf or having produced a calf during the 12 months prior to the opening of the show