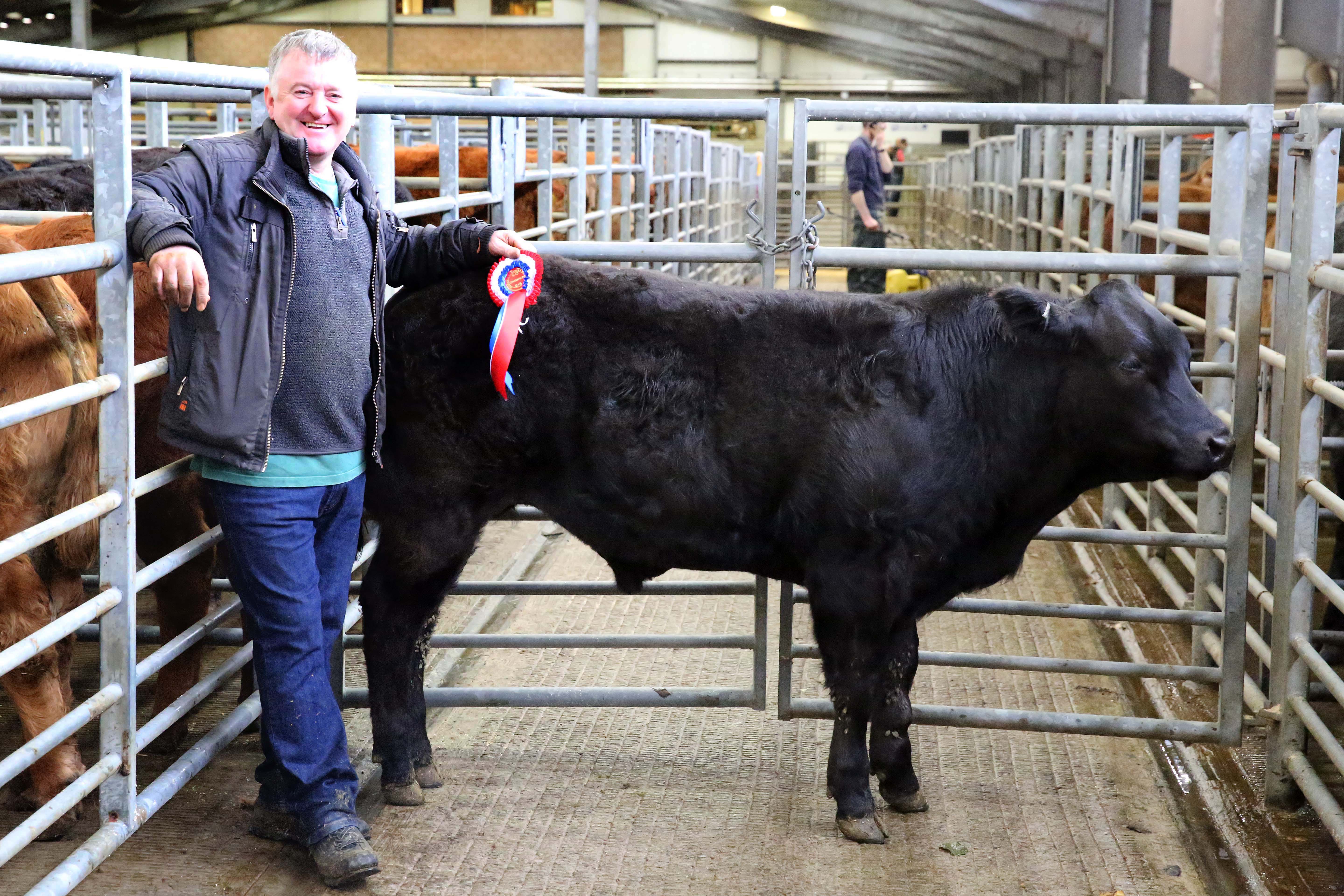 Hexham and Northern Marts held their special annual prize show and sale of Limousin cross sucklers on Friday 13 October. Judged by Mr John Mellin from Long Preston the first of the show classes were for the best pens of four Limousin cross steers and heifers. The North West Limousin Cattle Breeders Trophy for the champion pen of four was finally awarded to a super pen of upstanding black bullocks sired by one of two Haltcliffe bred Limousin stock bulls. They came from father and son team; Richard and Christopher Thornton, Cornhills.

The Kirkwhelpington based breeders and renowned stockmen have figured amongst the prizes at this show sale for a number of years. This year they brought forward a super run of fifty well-bred cattle which ended in seeing their champion pen of four change hands for £1,320 after some furious competition from buyers all over the UK. The hammer went down to a regular Hexham buyer, Mr Walter Dandie, Broxburn.

The individual classes came to a head with the first prize individual Limousin cross steer against the first prize heifer. It was a double whammy for Whitfield based Lee Family of Agars Hill, who had won both classes; the first with a smart black steer and then again with a spirited red heifer, both sired by a home bred sire going back to Goldies Oswald. It was the black bullock at 12 months of age that caught the judge’s eye as he awarded the Champion rosette. Later in the sale ring father Steven Lee and son Sam represented the family, well known across the region for their top quality suckled calves, to receive the George Stappard Memorial Trophy as their Overall champion was brought forward for sale. The yearling bullock rapidly made its way to £1,150 and was knocked down to Douglas Bailes, Hartlepool. Just as the pair had been brought to the market by the same producers, so too were they taken home by the same finisher, Mr Bailes also bought the heifer which stood as reserve champion, for £1,160.

Following the show the sale got underway and one of the first lots through the ring ended up topping the sale. A pure bred 18 month old Limousin heifer from Artie Hunter, Glanton, Northumberland was knocked down for £1,470 to Messrs Wigham, Haltwhistle. The top priced steer realised £1,360, it came from Messrs Robinson, Bog Hall, selling to Ricky Alder, Ponteland.

The catalogue was littered with highlights with quality cattle on offer to a buoyant crown of buyers. Such robust trade once again serves as a reminder as to how the characteristics of the breed fit the commercial requirements of the modern market conditions where efficiency is the name of the game. Over the years the Society has placed emphasis on the needs of the commercial beef producer, providing the Limousin cattle that meet their expectations in terms of consistency, performance and profitability. This is an objective that the society continues to invest in so that pedigree breeders and commercial buyers alike see tangible financial returns.