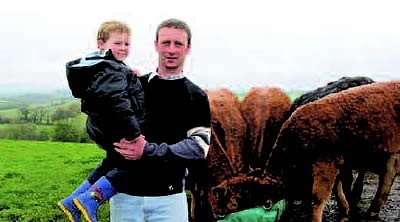 Ireland and its counties are sub-divided in a unique way; counties into baronies, baronies into parishes, and parishes into townlands.

The townland is a unique feature of the Irish landscape and is one of the most ancient divisions in the country. The origins of the townland remain obscure but they are undoubtedly of great antiquity, much older than parishes and counties. The Townland of Rahoney is situated in West Tyrone, not far from the village of Trillick and is mainly farming land with a boulder clay base, great for growing grass but, being subject to the predominate South-West air stream, having a higher rainfall than areas further east.

But Rahoney is unique in another way because it is here that the H & D McFarland farm enterprise, encompassing the Rahoney Limousin Herd, established in 1985, is located. Comprising some 300 acres of drumlin-type land, almost entirely in grass, except for some 20 acres of whole-crop wheat, the holding has for the past generations supported a dairy herd together with pigs, poultry and some beef cattle. Only the cattle remain at present with the enterprise geared to milk production from some 80 Holsteins/Friesians and, as well as maintaining the Pedigree Herd, the production of beef from a suckler herd comprising around 20 pure-bred Limousin and 25 Limousin-cross cows.

The farmyard is compact with adequate winter and wet weather housing to meet the requirements of the herds with the Pedigree herd housed in cubicles on “slats” and the remainder in “easy-feed” pens. Dairy Herd cows are put to a Limousin bull after the herd’s replacement programme is complete with the resulting bull calves born from September to February finished as bull beef while later calves are castrated. Most of the heifers are again put to a Lim Bull and sold off after calving with calves at foot but with some being retained as suckler herd replacements. In the previous 12 months, steers and heifers out of the dairy herd at 15 months finished at around 345kg with 5% grading U’s, 73% R’s and 22% O+3.

The Suckler Herds, both pure-bred and commercial, are run with the stock bulls, with some A.I. used, and calving is May to July. All calves are finished and slaughtered, at Omagh Meats – bulls at about 15 months at 410kg and heifers from 18-24 months at 320kg with practically all grading U’s. The crossbred bull beef from the suckler herd has a 0.83kg carcase gain from birth to slaughter. The current stock bulls are Limo Pedro (LM+35), a Greensons Gigolo son out of a Duc dam, and a Mas Du Clo son, Drummin Beau out of a Moustic cow. The feeding of stock has been given due consideration and, apart from grazing, the major source of feed is silage.

Silage-making is approached with the same diligence as other aspects of the enterprise. Grass is mown down at an optimum stage, turned and “tedded” until considered to be at the proper state and ensiled in trench silos. The care taken with this aspect can be appreciated as the finished product tests out at 40% dry matter! The whole-crop wheat is used exclusively for the dairy herd. High Cereal Rations concentrates are bought in and used as necessary while special attention is given to the feeding of cows after calving and the creep feed of calves. Howard and Graham McFarland jointly run the enterprise with some considerable help from their father, Walter and, as required, their brothers and, while their business has had some notable successes, they are very modest about these.

There is, however, a great deal that is worthy of comment….. A search of “Rahoney” in the worldwide web and elsewhere will show a list of successes at shows and sales. For instance: “Junior Champion and Reserve Supreme was Rahoney Reuben by Tanat Mostyn at the BLCS Portadown Sale (Nov 2001)”; “The Reserve Championship at the Northern Ireland Beef and Lamb Championships at Portadown went to a Rahoney commercial entry (2001)”; “At the ILC Sale in 2004, Rahoney Uz sold for 14,000gns and Rahoney Starlight for 9,000gns while in the same year Rahoney Umar was sold to AI Services (2004)”; “Top price of 6,500gns paid for Rahoney Albert by Limo Pedro at the BLCS Dungannon Show & Sale Dungannon (Nov 2006)”; “Junior Champion was Rahoney Victorious by Ronick Oklahoma at the BLCS Dungannon Show & Sale ( Feb 2006)” – all indicative of the quality of the stock bred here. There have been further successes with the Rahoney Herd clocking up no fewer that 12 Champion/Reserve tickets.

So why Limousin? Howard McFarland is passionate in his desire to breed quality stock, whether for the pedigree or the commercial beef market. He sees in Limousin a breed that is versatile, that can meet the requirements right across a wide range of situations, that has the unique potential to produce cattle which react well to good management, and, in the right conditions, have great growth rates but, of utmost importance, have a finished product that is what the customer demands. He recognises the need not only to breed top class bulls but to make sure that the females match up, too, and the cows seen in both the pedigree and commercial suckler herds certainly come up to his standards. He pays tribute to the mark that past stock bulls have left in the herds – Shanogue Dancer by Talent, bred by Brian McAuley of Antrim – “a great breeder of females” – and Ronick Oklahoma – both bought after a close look at the information gleaned from EBV’s and by visual assessment. He recognises, too, the value of docility and a walk through the fields where the stock continues to graze without being put off in any way by the presence of strange humans is evidence enough of the success of this often forgotten element of breeding.

But the Rahoney enterprise is a business and, like all businesses, is subject to the ups and downs of market trends and Howard, like many beef producers in Northern Ireland, has been concerned by the recent NI Red Meat Task Force Report which indicated that NI producers are losing approximately £180 million pounds per year excluding interest and depreciation costs and that the Task Force could not find economically viable solutions for suckler beef at current market prices. Whatever solutions may eventually be found, Howard McFarland is certain of one thing….. If there is any possibility of bringing animals to slaughter at a profit then these elements must be taken into account: ease of calving, good growth rates, ease of keep, good kill-out percentages and top grades – and Limousin provides the answer to each and all of these and this, coupled with good management, must surely give hope for the future. Whatever the outcome of the Task Force’s findings, the McFarlands are secure in the knowledge that, at Rahoney, what they are producing is of the highest quality and they will endeavour to continue to do so.