LIMOUSIN – MEETING THE DEMANDS OF THE MARKETPLACE 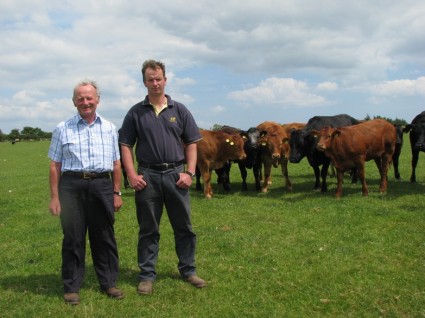 A Northumberland family which credits the Limousin with helping them to meet the demands of today’s customers has started to make an impact on the pedigree circuit, with several homebred breeding bulls having attracted keen bidding at pedigree sales.

Swarland Old Hall near Morpeth is farmed by Andrew Proctor in partnership with his parents, Arthur and Dianne. The family owns around 300 acres and rents a further 200. There are around 125 three-quarter Limousin and Limousin-cross British Blue cows, with a further 25 pedigree females registered under the Swarland prefix. The main group calves in spring, with the remainder calving during the autumn.

The family’s enthusiasm for theLimousinbreed is boundless, and they are 100% focused on improving the quality of their herd year-on-year. It is a source of great pride that their homebred pedigree bulls have started to command good prices over the past few years. The highlight of their achievements to date is the sale of their Limo Tanat son, Swarland Cantona, which was knocked down for 8,000gns atCarlislein May 2009.

Andrew and his parents are convinced that there is no better way to select new bloodlines than to attend the Society Sales atCarlisle. One recent, high profile acquisition took place at the May show and sale this year. The event made history when Reserve Junior Champion, Emslies Black Empire, put forward by Harry Emslie of Kinknockie, Aberdeenshire, sold for 26,000gns. This set a new UKrecord for black Limousins.

Black cattle are much-admired by the Proctors, so it was a foregone conclusion that they would not come home without making a purchase. Their choice was the February 2009-born Emslies Black Enigma, for which they paid 6,800gns. Like his brother Empire, Enigma is also a son of Bailea Black BMW.

Another stock bull held in high regard is the 12,000gns Brontemoor Apache, whose grandfather is the noted Heros. Sadly, the bull had a fatal accident recently, but not before he had left a number of good calves behind him. A grandson of Heros, Apache came from the Brontemoor Herd owned by SM Priestley of Hill Top Farm, Denholme, Bradford inWest Yorkshire, having been put forward at the 2007 May Society Sale.

At one time, the family concentrated on rearing cattle for the store market, but the removal of headage payments prompted them to finish the youngstock at home. All the animals go through the auction mart at St Boswells, where they are usually purchased by independent butchers. However, there has been growing interest in the heifers for breeding, and several have also been sold privately.

The Proctors weigh their cattle on a weekly basis once they are close to finishing. The information provides a benchmark for feed conversion, and allows them to gather performance feedback relating to their breeding animals. Weights are also recorded at 100 days, so the current batch can be compared with a similar group from the previous year.

A limit of 600kgs is set for finished animals, as the family has learnt by experience that heavier cattle are not normally required by local butchers, whose withdrawal from bidding may result in prices falling by as much as 20ppkg. Bullocks generally leave the farm at an average 580-600kgs, with heifers reaching around 500kgs.

Andrew comments that prime quality butcher’s cattle with a good killing out percentage are still commanding a premium in the marketplace:

“We have found that finishing cattle earlier will improve meat-to-bone ratio. This feature, which we feel is just one of the benefits of the Limousin, makes the cattle more profitable, thereby encouraging buyers to return to us next time we put forward a consignment.”

Andrew believes that Northumberland and the Scottish Borders are good places to sell cattle.

“We are very lucky in this region. There are still a lot of independent butchers in the Borders, and we feel that consumers have a greater appreciation of good meat, compared with some other parts of the country. But is has taken years to build up our reputation,” he adds.

Longevity is a trait that is commonplace among Limousin herds, and the oldest cow in the herd, Elevetham Magpie, is 14 years old. Andrew admits to having a favourite in Swarland Upsadaisy, a cow whose first two sons have both been retained for commercial and pedigree breeding. The first was Swarland Buckaroo, which is by Jockey, the second is Swarland Dapper, a Salomon son which Andrew believes to be the best animal he has bred to date.

“We are aiming to produce high quality commercial bulls with power and muscle definition. Good locomotion is also a key factor. With cows, we like a big, broad animal, which suits this farm and our system,” he says

“Sellers of suckled calves are sometimes biased towards the smaller, showier animal, but we like a cow with plenty of power. Calves need to be the correct shape, but high growth rates help to lift margins.” 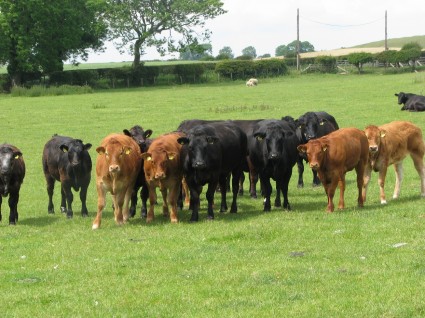 Other sires used across the herd include the 8,000gns Hartsideanew Boumsong, which took the Reserve Junior Championship when he was shown atCarlislein autumn 2007. The April 2006-born bull came from JM Thompson’s herd at Townfoot near Penrith. He is by the Ronick Member son, Greenwell Ronick, while his dam is the Cannon-sired Eden Senorita.

The health status of cattle is becoming increasingly important to cattle producers, and the Proctors take the issue very seriously indeed. A strict testing regime has been established, with help from vet John MacFarlane, who is based at the Alnorthumbria Veterinary Group in Alnwick.

Having joined theScottishAgriculturalCollege’s Premium Cattle Health Scheme, the Proctors qualified for the Society’s discount scheme, which offers a reduction of £2+VAT/head for every calf registered in the year. It applies to all members of a cattle health scheme which conforms to Cattle Health Certification Standards.

The herd at Swarland Old Hall has been virtually closed for the past decade, with any new stock bulls being subjected to a period of isolation for two to three months after arrival. The Proctors are so determined to keep out transmissible diseases that they have even stopped using bought-in colostrum.

BVD and Johne’s are the two main priorities. These have been selected after listening and acting upon buyers’ main concerns. The herd has already achieved BVD Accreditation within the SAC’s BVD Monitored Free programme, and is now working towards attaining a similar status for Johne’s Disease. Nevertheless, Andrew stresses that neither disease has ever been diagnosed on the farm.

Preliminary Johne’s testing will be implemented at the same time as the farm’s official TB testing, and only cattle aged two years or more will be included in the initial screening. In the unlikely event that any animals show a positive reaction, they will be culled immediately. Two clear tests, one year apart, are needed before disease-free status can be gained.

The first round of BVD blood testing was carried out on a selected group of cattle, with a second test following six months later. Testing involves five blood samples, taken from all groups of cattle which contain animals that are 9-18 months old. BVD accreditation can only be given after negative results have been obtained from two annual calf crops.

“Every penny spent on the herd health scheme is a wise investment for the future, in our opinion,” says Andrew. “Cattle will not achieve their potential if they are unwell, and disease-free status is important to the people who buy our bulls, so obviously it is very important to us. But it’s not just about pleasing our customers. We enjoy breeding cattle, and we take great pleasure in keeping them cattle looking fit and healthy.”