Spending up to 10,000gns for a commercial bull may sound a little excessive for some beef producers, but for John Blaxell it’s a must to ensure quality stock are produced for the liveweight market. 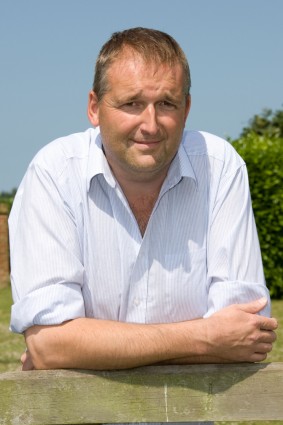 Commercial and pedigree producer John Blaxell is no stranger to spending big in order to get the right bull. His 200-cow suckler herd at Eastfield Farm, Hickling, Norfolk, is home to six stock bulls, five of which are Limousins including two bulls bought through Carlisle Mart from the renowned Haltcliffe herd.

“I see buying a good bull for the commercial herd as much of an important investment as a new piece of machinery, you have to buy the best to produce the best,” explains John, who farms 900 acres alongside the Norfolk Broads.

John, who produces mainly Limousin cross suckler-bred beef which is sold through the live ring at Newark Livestock Market, says when stock are continually selling for 175-200p/kg and cull cow trade is in excess of £1000 a head for his stock, an investment of up to 10,000gns shouldn’t seem out of the ordinary.

And it’s not just a bull’s looks which draw John to them, with great care taken to research bulls beforehand. “When looking for a bull I study the catalogue in depth at first looking for certain pedigrees which catch my eye and then take a closer look on sale day. Bulls have to be long, clean and have good conformation and muscling as well as good locomotion for longevity.”

Two bulls bought through Carlisle have carried the Haltcliffe prefix, the most recent of which was the 10,000gns Haltcliffe Elgin, who was bought in May this year. Sired by Procters Commander, he is out of the Cloughhead Umpire daughter Haltcliffe Brenda. “The mix of Commander on an Umpire daughter seems to have clicked very well,” says John.

As a breeder of a few pedigree Limousin cattle himself under the Blaxfield prefix, John appreciates a proven pedigree when buying bulls. “I look for something that I know will produce a saleable commodity and with the Haltcliffe bulls I get just that.”

His previous Haltcliffe purchase was Haltcliffe Argent, purchased for 8800gns in May 2007. A Sympa son out of Ronick Jester who is daughter of Ronick Esther, the dam of Ronick Hawk, this bull has produced some fantastic suckled calves which have finished well, as well as some quality replacements for the herd.

“I prefer to buy from repeat breeders as trust is important when buying stock. I know the health status of the farm and more importantly I know the bulls will deliver for me.” And although John isn’t a huge follower of figures, having them there as a management tool, also helps as a guidance to what the bull is potentially capable of producing and calving like.

Alongside the two Haltcliffe bulls, John is running two Mereside bulls bred by the Hazard family, Grantham,Lincolnshire. Mereside Vainqueur, a Mereside Tobias son out of an Imprudent daughter and Mereside Ventura, an Objat son, were both purchased privately with Ventura bought having been seen as a calf in 2006 at the Royal Show. 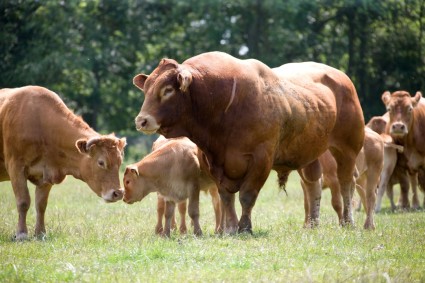 The other Limousin bull is a Goldies bull by Ampertaine Bravo, which again was bought fromCarlisle. These five bulls run alongside a British Blue which was bought to add a little hybrid vigour in to the herd on the female side. “The Limousin x British Blue is a mix that continually works well, you only have to see what wins the major primestock shows to know it clicks well,” he adds.

The Limousin produces exactly what John feels is the way forward for the modern suckler beef industry, a well balanced, clean carcass with great loin and females that calve easily, have good mothering instinct and consistently produce a quality calf.  Within John’s herd the majority of cows are three-quarter bred Limousinwith some moving to pure.

The herd calves in late autumn and early spring with a 30:70 mix to ensure a continuous supply of stock being sold throughout the year as well as a spread of work load. Finishing cattle are fed a cereal based diet of home grown barley and wheat as well as added minerals with bulls taking 2t each from weaning through to finishing.

“Bulls are growing at about 1.9kg a day and are weighed monthly to ensure they are sold weighing between 550kg and 600kg. Finishing heifers are fed a similar diet and grow at a rate of about 1.2-1.5kg a day and when sold weigh 450-500kg.”

With just himself and stockman Daniel Cook working on the farm, John says the other key to his system is a good handling system. “I don’t believe the temperament issue associated with Limousin cattle. Having worked with various breeds I don’t find the Limousin any more difficult to handle than any of the other Continental breeds or even a native, providing you manage them correctly.

“But I do believe in having the right facilities to handle stock and have never looked back from purchasing a squeeze crush from Edward Penty. It certainly helps to move stock in a quieter manner and we can get most of the everyday handling tasks done in half the time and with far less stress,” he adds.

Coupled with a good handling system is a good relationship with the vet. Working closely with Norfolk Farm Vets, the herd is vaccinated for pneumonia and BVD and is monitored as and when other issues arise, although the herd has never seen a case of Leptospirosis or Johne’s disease. “Bulls are also isolated, tested and vaccinated on arrival before entering the main herd.”

Running alongside the main commercial herd is a pedigree herd of 15 females. “We haven’t bought in a female for the last five years and don’t plan to buy in any more. I like having the pedigrees about the place and take an avid interest in new genetics that come on to the market place.

“Initially cows were purchased from the Hazard family, as well as John Allison (Thornage herd), plus a few other females throughout the years,” he explains. “Similar to my commercial females I tend to breed a medium sized cow with good feet and legs and good milking ability.”

Looking ahead John believes the future for good quality suckler bred beef is a bright one. “There will always be a demand for quality beef for the top end of the market and suckler bred beef fits that need perfectly.

“Importantly too the Limousin breed is in a perfect place to capitalise on this demand. We find Limousins easily calved and the calves have plenty of vigour when they’re born which is essential when labour is limited. The cows milk well and calves are easy to flesh on a simple diet, it’s a recipe for success and one I hope to still be capitalising on for many years to come.”