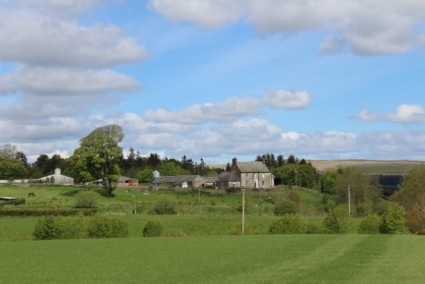 Feature on the finishing enterprise of David Dickinson, Brockwoodlees, near Canonbie, Dumfriesshire.

Specialising in the supply of quality cattle for the private butcher’s market requires an unerring eye for the selection of stores and attention to detail throughout the production system. David Dickinson manages to fulfil both criteria, with the Limousin a major factor in contributing towards his achievements.

David Dickinson finishes 650-700 cattle a year at Brockwoodlees, a 480-acre, all-grass farm near Canonbie in Dumfriesshire. The majority are purchased as stores, although he also rears and finishes calves from his own 50-cow suckler herd. These are mainly three-quarter Limousins or British Blue crosses, calving in May, June and July. The farm also supports a flock of 500 Texel cross Mules, which go back to the Texel or Beltex.

The Dickinsons are very much a farming family, with David’s brother, Robert of High Knipe near Penrith in Cumbria, well-known for topping the local markets, where he sells heifers with calves at foot.  Elder brother, Alan, is also based in Cumbria and keeps 16,000 laying hens.

The Dickinsons have been tenants of the Duke of Buccleugh’s estate for 21 years. Prior to their arrival at Brockwoodlees, they rented another farm from the estate just a few miles away. However, they were grateful when given the opportunity to move to a farm with more potential and a larger house. David and his wife, Rosie, have three children, Joe, who works at home, Laura and Alice.

The small suckler herd includes two stock bulls, one of which is a pedigree Limousin from the Hunter family’s Low Abbey herd, also in Dumfriesshire. The other is a Belgian Blue cross Blonde. David does not rear his own female replacements, preferring to buy them in. This allows him to concentrate on his store finishing enterprise.

“I generally buy heifers with calves at foot,” says David. “That way, I can see the type of calf they are going to produce. I am much more concerned about the calf’s conformation than I am about the heifer’s breeding, because the best females don’t necessarily produce the best calves.”

The majority of stores are sourced from local auction marts, including Carlisle, Lockerbie, Longtown and Lanark, although some are bought privately on occasion.

The purchase of the right type of store animal at the right price is critical to farm profitability, says David. He is usually looking for animals at around the 17-month mark, but younger cattle are purchased in the spring, so they can spend early summer out at grass.

“Selecting stores is not simply about spotting an animal with good conformation,” he stresses. “Much more important is the assessment of their potential; the skill lies in being able to envisage how they will look once they are finished.

About one third of the finished cattle go to Cranston’s Quality Butchers (Purveyors of Fine Foods and Meats). It is an award-winning, meat specialist retailing business with a chain of family butcher shops in Cumbria, as well as two Cumbrian food halls. The association between supplier and customer spans almost three decades and David says he has a good working relationship with Roger Cranston, who trusts him to supply exactly what he is looking for.

“The butchers have very specific requirements. They are looking for carcases that grade out at U3 and U4L and much prefer heifers. They like carcases which I would describe as being full of meat. In my opinion, all growing cattle benefit from a store period. The results won’t be as good if they are pushed too hard, a degree of patience is required.”

There is no set rule on weight, he says.

“Individual butchers have their own ideas about the ideal carcase; Cranston’s likes heifers at no more than 400kgs deadweight. They favour what I call a ‘thick’ type of beast, not too extreme in shape and with plenty of fat cover.

“Another crucial aspect is consistency; butchers tend to build up a regular clientele and these consumers expect the meat to meet their quality standards week in and week out. The meat must also have good colour and look attractive when displayed on the butcher’s counter.

“I accept that I will have to pay slightly over the market average for the type of quality store animal I am looking for. A plain beast will not achieve the required killing out percentage and I don’t want my customers to start looking elsewhere.”

David also sells at Lanark auction finished cattle sales on a weekly basis and visits Caledonian Marts, Stirling, every fortnight, where he regularly tops the market. Most cattle leave the farm at 22-24 months and to ease cash flow, they are sold 52 weeks of the year.

Fatstock shows act as a shop window for the Dickinson cattle and the family always puts in an appearance at the annual Lawrie and Symington Scottish Limousin Club show and sale. At this year’s event in May, they secured the champion heifer title, with an animal that tipped the scales at 544kgs and went on to sell for 266p/kg. At this particular event, their cattle have taken a red ribbon in nine out of ten outings.

One of the most notable accomplishments came in 2010, when their Limousin heifer took the championship at the Lanark Christmas show and sale. Weighing in at 585kgs, she attracted a record bid of 705p/kg (£4,124.25), having been purchased by butchers, W Buchanan and Son of Burnbank, Hamilton. The only other regular fixture in the calendar is a similar show and sale at Caledonian Marts, Stirling.

The meticulous care with which David picks out stores is also applied to the way the cattle are reared. They receive a finishing ration made specifically for the farm. Some of the ingredients are a well-kept secret, but David will say that it contains 60% cereals and has a 12.5% protein analysis. It has been formulated with the aim of putting “just the right amount” of flesh on the cattle.

David’s view that high fibre is beneficial to the diet means that round bales are preferred for the growing cattle, with the feed value closer to haylage than silage. They also pick at their straw bedding, which is another source of fibre. The high dry matter forage keeps the dung firmer and the cattle healthier overall, he says. Meanwhile, the cows thrive on pit silage.

Contractors are brought in for silage-making and the neighbours also help out, under a reciprocal arrangement. Some 20-30 acres are ploughed out and reseeded annually, using long-term ryegrass mixtures. Despite having moved to drier land, the prevention of damage to soil structure remains a constant challenge.

“On the other holding, we couldn’t travel on the fields for three to four weeks after heavy rain, while on this farm they are accessible after three or four days. We only take one cut of silage on 120-130 acres each year, normally around July. But that might change this time, as I estimate that spring arrived two to three weeks later than usual.”

David is philosophical about the current downward trend in beef prices.

“Butchers will pay more than the market average for the right type of cattle, but my margins are still a long way below where they need to be. But there is no point in jumping from one enterprise to another; I believe it’s much better to stick with what you know, as long as it’s working for you.”

“It will be interesting to see what the future holds over the next few years. Suckler cow numbers have declined dramatically, with many producers switching to buying in stores. If this trend continues and people stop breeding cattle, where are all these stores going to come from?”

David freely admits that he has no interest in the pedigree side, but it is clear that his focus and commitment to producing quality beef for a niche market requires an equal level of dedication. And there is no better breed on which to build his business than the Limousin, he says.

“The Limousin is known as the carcase breed and I would agree with that description,” he states. “When it comes right down to it, it is the breed of choice for high quality butchers. It is relatively straightforward to get the right level of cover on a Limousin, whereas it can be more difficult to achieve the correct finish on some other breeds.

“On the whole, I feel I have a good understanding of what the market requires and that means seeking out and buying the best Limousin and Limousin crossbred store cattle that I can find.”

Harrison and Hetherington sales director, Scott Donaldson, acknowledges David’s skill at selecting stores which have the potential to go on to become prime cattle.

“David is a very discerning buyer, who only chooses animals which will suit the top end of the market,” says Scott. “He is a good supporter of trade, both at Carlisle and at Lockerbie.

“It is no surprise that David favours the Limousin; the breed has all the traits required by the quality end of the market; as long as it’s produced correctly. That applies whether it’s smaller carcases for the butcher trade or larger carcases suitable for the supermarkets and wholesalers. Today’s buyers are looking for well-finished cattle and the Limousin more than capable of achieving that goal.”