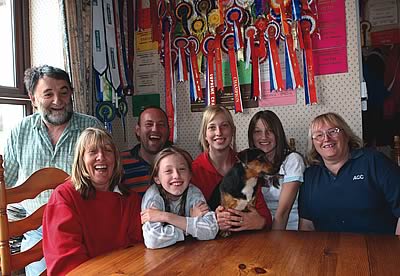 The maze of minor West Wales roads might make Cilgryman Fawr a difficult place to find – but there are certainly no location problems when it comes to Mynach. Bulls and females bearing the prefix are scattered far and wide across the UK.

Recent years have seen stock from the E.D. Griffiths and Co family concern – Eddie and Gwyneth, their son, Daf, and his wife, Jane – attracting leading prices at the Carlisle breed sales and heading up the judging parades at major shows.

Two years ago, Mynach Sporty was breed champion at the Royal Welsh Show and all the stops are being pulled out for a repeat success at this year’s Builth Wells spectacular, which again sees Limousins topping the competitive beef classes with a massive entry of 148 – despite RWAS imposed restrictions deemed necessary in order to accommodate as many exhibitors as possible.

For the Griffiths family, though, success within the breed has come about as a result of total commitment to achieving perfection – and not being swayed away from personally perceived aspects of just what makes up quality. 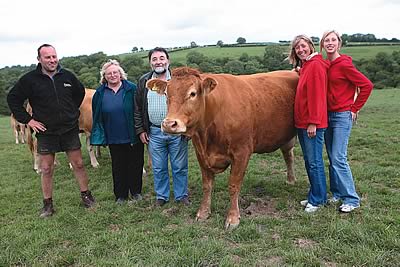 Fourteen years ago, however, there was little thought of pursuing a pedigree breeding path. Cardiganshire-born in the Llanwenog area – noted for its outstanding yet rare sheep breed of the same name – Eddie and Gwyneth began their farming life in neighbouring Carmarthenshire when they took on a 150-acre high hill farm at Llanddeusant, close to the boundary with Breconshire and with grazing on Mynydd Ddu, the second highest mountain within the Brecon Beacons.

They farmed there for 20 years with beef cattle and sheep, keeping 18 pedigree Welsh Blacks and 500 Welsh Mountain cross ewes. But with Daf finishing his schooling, more ground was considered necessary in order to be able to keep him farming at home. That prompted a “here, there and everywhere” search for a bigger farm until, in 1988, they were the successful bidders for Cilgryman Fawr, a 195-acre dairying and stock-rearing farm at Cwmfelin Mynach – just about as far west as you can get within Carmarthenshire and very close to the boundary with Pembrokeshire.
“We had been looking for a 350-acre unit but having sold our own farm that was all we could find at the time,” says Eddie Griffiths. “It was not as large as we had wanted but we had little choice but to go for it. There was a set up for 40 dairy cows, beef cattle and sheep but we had no intention of milking. At that time, the buildings were considered to be good but certainly far too small these days. “We moved here with 12 pedigree Welsh Blacks and 400 ewes, buying in Hereford and Limousin cross cows to build up a commercial suckler herd and more breeding ewes.

“Eventually we were up to 60 suckler cows, putting a Charolais bull on them and selling the calves weaned. “We did, however, find that there seemed to be a preference for Limousin cross calves, so we changed our sire – only to wonder just what had we done. The calves were turning out to be very small at birth. “What a mistake, we thought, but by the time they were four or five months old what a difference! It was the best move we ever made.
“We still had the pure Welsh Blacks at that time – carrying the Blaensawdde prefix – but that year 11 of the 12 calves born were bulls. The one female then damaged a hip and had to be put down.
“That was the end of the Welsh Blacks as far as I was concerned and following a family conference the decision was taken to put everything to a Limousin bull.
“Our first stock bull was Teilo Andy, a son of Funambule, who was one of the breed’s top sires in the 1970s. “We used Andy on all the commercial cows and the Welsh Blacks and he threw some excellent crossbred calves,” says Eddie.
“We were, of course, still looking for the extra 100 acres of ground, it being difficult to make a living on 185 effective acres purely from commercial beef and sheep production. But nothing looked as though it would ever come our way.
“In 1992 we took the decision to concentrate on pedigree Limousin breeding – hopefully making as much money out of 40 to 50 pure bred cows as 150 commercials and producing as much income from 185 acres as 350. “So, instead of buying more land, it was agreed that we would put the money into breeding quality pedigree stock.

“Looking back it was a pretty good move and a decision that certainly suited Daf and Jane – giving them the farming incentive they wanted.” 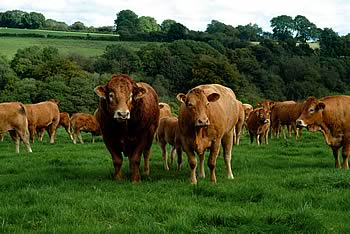 Indeed, while taking a holiday in Cornwall they were the ones who spotted details of a herd dispersal sale that was to pave the foundations for today’s Mynach herd. It was for the Columbjohn herd of Limousins run by Frank and Rita Walters at Cullompton, near Exeter. The Griffiths family went to the sale and bought 11 females – a mixture of ages and forerunners of a large proportion of the present day lines.

Two outstanding females were Roeburn Treasure and Columbjohn Amber and the majority were daughters of Columbjohn Drake, a son of Sebastian. “He was bred in Limoges by Guy and Evelyn Broussaud and that is where we decided to go for our first stock bull – and the two or three that followed,” says Eddie. “Perhaps the most influential has been Oedipe – who sired Mynach Sporty – with his first 12 sons averaging 5,500 gns at the Carlisle sales with 35 of his daughters in the herd today.
“The first bulls out of two of them have sold for 8,200 gns and 6,400 gns. They are by Sable, the present stock bull.” 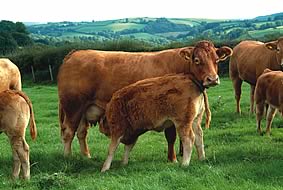 The first two French bred bulls not from Broussaud – Villy and Vrilion – joined the herd last autumn and the first ever British bred bull was bought for 4,000 gns at the inaugural Brecon Limousin breed sale in November. He is Rhonllwyn Vandal, a very stylish now 26-month-old bred by the father and son team of David and Craig Ingram at Llandegley near Llandrindod Wells, Powys. A son of Hartside Hensingham and out of Fleethill Popular, he was placed second in a strong class of 10 bulls at last year’s Royal Welsh and was the Brecon sale champion – judged by Daf Griffiths. His 400-day weight was 620 kg and a beef value of LM+29 put him into the top 10 per cent of recorded Limousins.
“Over the years we have found it difficult to get our hands on a bull that in our eyes is very correct,” says Eddie. “Vandal has style, the right shape, walks very well. Indeed, we could not fault him.” 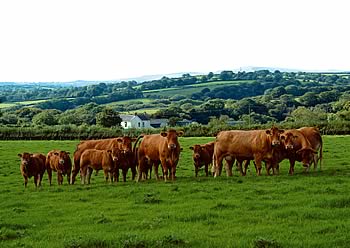 One aspect the Griffiths pride themselves with is having what is perhaps “the quietest Limousin herd in the country” – a fact more than evident from the friendliness of the stock even when grazing with a bull or calves at foot. “We work on the basis that you cannot make wild cattle tame – but you can make tame cattle wild,” says Eddie.
“We look after our cattle very well from the day they are born and it pays off. But if anything at all shows a potential problem of bad temperament there is no hesitation. It is culled.”

Remarkably, too, all but one of the 64 females in the herd today are home bred, calving is all the year round and there is nothing fancy about the management. Cows are loose housed during what is a six-month winter running from October to April and they are fed a silage-only diet. Last year the herd won the breed society’s South Wales and Mid West herd competition for the third time.

As to the future, the aim is to continue improving the quality of Mynach stock. “So far all the bulls we have used have been geared towards getting the female lines correct. The intention now is to have one bull to continue breeding good bulls and females for the pedigree market and another more beefy type to produce bulls for the commercial producer with good back ends!”

The sheep flock at Cilgryman Fawr is mostly made up of Texel crosses and has been cut back to 150 ewes – but there is also a nucleus flock of 40 pedigree Texels.