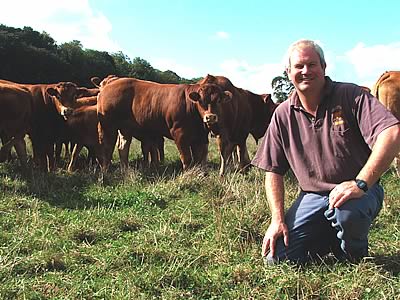 Patrick Greed first introduced Limousins to Columbjohn Farm, Exeter, Devon in 1995 in an effort to better meet market requirements. “I wanted good conformation, killing-out percentages and growth rates, and the Limousin breed could be put across all types of other breeds to produce a consistent end product.”

He now keeps 60 pedigree Limousin cows and 110 continental cross-breds at the 750-acre farm, all of which are put to one of four Limousin sires. “We choose our sires based on conformation, growth rates, Estimated Breeding Values and ease of calving. We go for length as well as width, and usually buy from Carlisle at upwards of £4000.”

However, the best sire on the farm, which is part of the Killerton Estate, is home-bred Killerton Paddy, by Hortensia. His most successful offspring to date has been Killerton Travis, out of Killerton Narnia, which Genus describes as having: “the potential to be the next Limousin breed leader.” Another promising bull, Lowabbey United, bought from Carlisle in 2004, is also producing calves with plenty of potential, says Patrick. 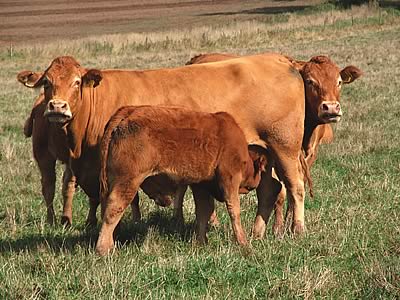 And it is top quality breeding which he believes is critical to the future of the beef industry. “People have got to start investing in better quality bulls. Whether they are suckler producers or dairy farmers, they are selling themselves short on their end product. With a good quality bull you get a better carcass and better priced calves: at £75-£80 more per head it doesn’t take very long to get your money back.”

It is this investment in better breeding which Patrick believes differentiates his herd from many others. But there are other factors in play: “Breeding, feeding and management are my keys to success.”

With three full-time staff and a student, Patrick has chosen the easiest and cheapest form of management to suit the farm. “All the cows are outwintered – by not housing them we have a huge cost saving.” They are fed on stubble turnips with round baled straw and are moved onto a new area every day.

The youngstock also get some grass silage and a 14% protein home-mix cereal blend, and the calving cows are fed some silage depending on the weather and condition score. “The key to it is the condition score – if they go into the winter with a score of 2.5-3 they will hold it right through.” 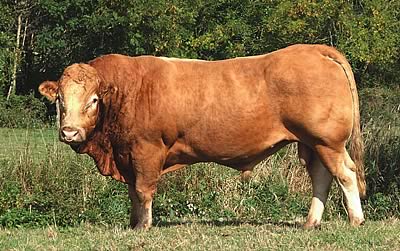 The cows even calve outside, with very little help ever required. Both herds are spring calving, starting in March, and Patrick is trying to tighten the calving window for easier management. The spring-born heifers are left with their mothers until January, so they can run as one group. The bulls are weaned in October and left entire until June, when the cross-breds are steered, although Patrick plans to finish more bull calves for the export market in the future. Any bull calves born later than June are steered and left to run with the cow and heifer group. All the pedigree bull calves are left entire.

The calves are creep fed a home-grown blend of wheat, oats and barley with a protein balancer from day one, with the exception of the cross-bred heifers, which are not fed until September. “I want them to grow in size not flesh at that point,” says Patrick.

All the spring-born calves are housed in loose yards over the winter, with the bulls fed an ad-lib cereal-based blend with rapemeal and maize gluten. “At £105/t ex-store I can buy it in as cheaply as I can produce it myself – and it is producing the growth rates and grades that I want.” They are finished at 12-14 months of age at around 650kg lw. The heifers are fed a restricted diet and are finished at 15-20 months old at about 550kg.

Patrick weighs all the cattle at worming and every two weeks when they near their finished weights. The steers have averaged growth rates of 1.41kg/day this year, with the heifers coming in at 0.86kg/day.
About 90% of the finished cattle are sold to St Merryn in Cornwall, with the remainder going for export or to local butchers. This year the steers have averaged 53% at E grade, with the remainder all at U grade. Some 76% of the heifers came in at U grades, with 14% at R and 5% each in E and O categories.
Deadweights are equally impressive, at 396kg for the steers and 311kg for the heifers, with killing out percentages averaging 61% and 57%, respectively. 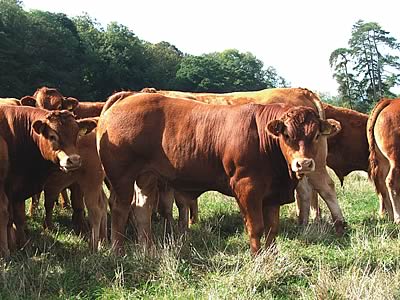 It was this consistency that impressed judge David Crosier, last year’s South-west winner from Hollies Farm, Middlezoy, Somerset. “The production of Patrick’s cattle was spot on. I was most impressed by the quality and consistency of the calves and finished cattle. It is nice to see someone putting their money where their mouth is and using bulls which they have bred or chosen to produce the conformation that they’re after.”

Patrick’s ruthless culling policy – based on fertility, temperament, feet and calf quality – also caught David’s eye. “He runs a fairly tight ship and commercially that is a good thing.” However, his cows still reach some ripe ages, particularly the Limousin cross-breds which easily get to 15 years old and average 11-12 calves each, says Patrick. “That longevity is another reason for choosing the breed.” Of the commercial herd, most cows are Limousin crosses, with some Belgian Blue, Charolais and Simmental lines.

David was also impressed by Patrick’s forward-thinking approach to marketing. “His strategy is well thought out. There are not many people who have had the courage to be exporting cattle already.”

And Patrick hopes to make more of the export market for both bulls and heifers, particularly if the supermarkets continue to squeeze prices and choose lower quality carcasses. “They must realise that if we don’t earn anything we can’t reinvest – they are very short-sighted. The export market is a lot stronger than the domestic market for the quality cattle which we produce.”

However, he is optimistic about the future of the beef industry. “There is a world shortage of beef, the population is still going up and people have got to eat. But they have to be prepared to pay for it.”
But farmers also need to be stronger sellers, particularly in the pedigree world, he claims. “There are always breeders who will sell at £800-£1000 when they could sell that bull at 18 months old deadweight instead.” Patrick sells his pedigree bulls both privately and through markets, from 16 months onwards, and refuses to take less than £1500. “We keep 75% of our bull calves to sell on as sires, but this year we’ve picked a lot harder because the market has been slower.”

He has also had considerable showing success, raising both the farm profile and sale price of one young bull, Killerton Aniseed, which sold privately after scooping the breed champion and junior interbreed prize at Devon County Show earlier this year.

Although he keeps most of his pedigree heifers as replacements, Patrick buys in his commercial cows. “The _ bred Limousins are almost too good to go to the bull, so I buy in cows either with calves at foot or in-calf.” He also buys in 300 continental-cross animals, from weaned calves to two years old, to finish on the farm.

Having come second in last year’s Limousin Suckler Herd competition, how does Patrick hope to top this year’s success? “I entered this year in the hope that we would better our previous result. And we have done that. Next year I’d like to have a go at the judging!”