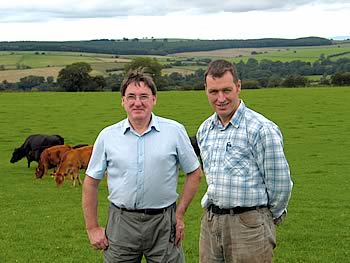 Running a suckler herd on a low-input, extensive system based almost 10 miles away from the home farm means choosing an easy-calving breed that is hardy enough to thrive outdoors during harsh winters. Cumbrian producer, Mark Holliday, feels that the Limousin matches that description perfectly.

Mark manages the 30-cow commercial herd at High Bank Hill, Kirkoswald with help from his father, Mike and uncle, Andrew. They rear 15-16 month old stores, which are usually sold in August and September. The official name of the enterprise dedicated to the Limousin herd is Todd Brothers, which is owned by Jean Holliday and her sister, Marjorie Goodhill. Mark explains its history: “There were originally four Todd brothers – George, Bill, Alf and Frank. They were dairy, sheep and beef producers in this area for more than a decade and had six daughters between them – no sons. When the last brother died in 1988, two of the daughters – Jean and Marjorie – bought the remaining sisters out of the business, which is now looked after by my family.” 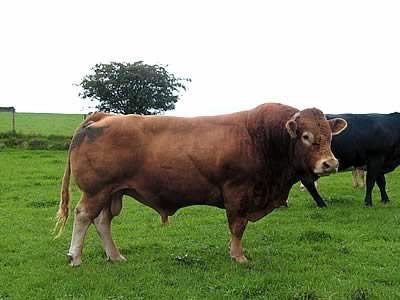 As the Hollidays live and work at their own large mixed farm several miles away at Langwathby, breed choice is important to the success of Todd Brothers. Stockman Keith Haughan makes a trip to see the herd once a day, but the distance involved puts the emphasis on ease of management.

The present-day female bloodlines are relatively new to High Bank Hill, as the original herd was culled in 2002 during the foot-and-mouth outbreak. The 30 Friesian cross Limousin replacements came from Messrs Mason of Bank Farm, Unthank, Gamblesby. They have since gone on to prove their worth and are now third-calvers. To date, not a single animal has been culled, and all have produced high-quality offspring.

One of the most influential sires has been the French-born Limousin, Papillon, a bull by Juron out of a cow called Agathe. Born in 1999, he was purchased from George Hutton of Setmabanning, near Keswick. The bull avoided slaughter at the time of the disease outbreak, because fortunately he had been brought back to the home farm well before the culling at High Bank Hill took place. “Papillon was selected primarily because he looked the part. He is wide from behind, with good legs and a very easy-going temperament,” says Mark. “He has turned out to be an excellent buy, and has thrown a high percentage of the type of calves we are looking for. They are small enough to minimise calving problems, but they get up very quickly after being born and flesh out with ease.” 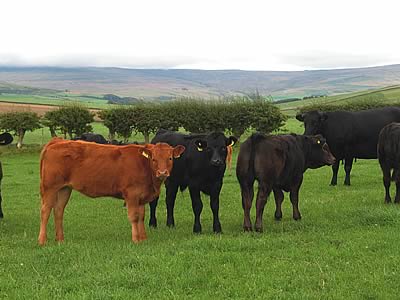 The soil type at High Bank Hill ranges from sandy to medium loam, and the area has a higher-than-average annual rainfall. The land stretches to 600 feet above sea-level, with some parts classified as Less Favoured Area. Despite its exposed aspect, the cows have been out-wintered for the past three years predominantly on hay, without the need for concentrate feeding. They have gone from strength to strength as a result of the new policy, comments Mark. “We used to bring the cows in around November and turn out just before calving in April. But leaving them outdoors has improved their general condition and we are satisfied with the result. We also feel they calve with fewer problems, probably because they get more exercise.”
“The out-wintering fields are normally areas that are destined to be ploughed up the following spring. To avoid poaching and the possible breach of cross-compliance rules, we provide plenty of feeders and move them around regularly. That stops the cows barging into each other and may possibly decrease the risk of abortion.”
“It would be fair to say that more feed is used when the herd is out-wintered, but there is no straw to pay for and big savings are made because we don’t have to deal with farmyard manure.”

From mid-September onwards, growing calves are offered an 18% concentrate ration, which is added to home-grown rolled barley on a 50:50 basis. Store bullocks leave the farm at around 500kg, while heifers usually reach 400-450kg. Trade tends to be brisk at Penrith Auction Mart, with the same customers coming back for Todd Brothers’ cattle year after year. Heifers are sometimes sold for breeding, and Ken Muir of Laithes Farm, Blencow is one regular customer. The cattle have taken a prize or two over the years, winning the Penrith Farmers and Kidds Suckled Calf Championship in 1998 and in 1999.

Alongside the core farming enterprises, the Hollidays run a separate business processing and selling all types of agricultural seed. This might go some way towards explaining their innovative and experimental attitude towards forage production, as well as feeding in general. 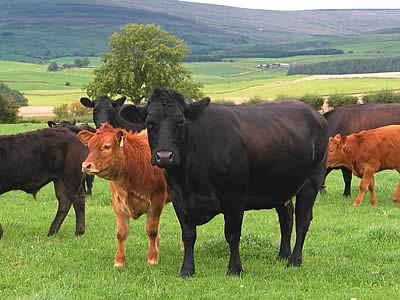 The farm has made very little silage for the past few years, because it is considered an expensive luxury. Instead, the cows are given hay, while this year one batch of calves is being offered haylage, which is made from a ryegrass/clover mix. It was produced almost by accident, reveals Mark. “We had intended to make hay but at the end of June, two days before we were expecting to mow the grass, the weather forecast predicted rain. We decided to cut the crop there and then, making it into big round bales wrapped in plastic. It has analysed at 22% moisture and I think it will be highly palatable.
“The plan for this season is to give one batch of calves hay and bought-in concentrates. The other half will just receive haylage and barley, which will cut the feed bill by about 20%. If it works adequately, we will try the system again next year, because we are trying to focus on cutting down the amount of feed we have to buy in.” A previous experiment to see whether a percentage of calves would perform well financially on ad-lib concentrates proved too expensive to continue, although it did produce “some tremendous cattle!” Mark adds.

In line with the general goal of keeping costs to a minimum while maintaining a high standard of management, few preventative injections are used. Cows get an annual selenium/copper injection, while calves are protected against pneumonia and rotavirus prior to weaning.

The Hollidays have no plans to change their simple system, or the breed of cattle that has served them so well over the years. The family is fairly optimistic about the future, and has taken heart from the slight price rises it has seen during 2006. “Store producers are under more pressure than ever to produce quality cattle, and it is always nice to look after stock that you find pleasing to the eye. That’s why we will stick with the Limousin. We are very happy with the way things are, and we will carry on trying to produce the best animals we possibly can,” says Mark.