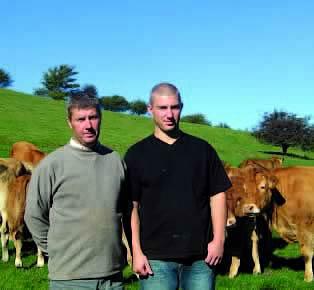 Throughout his farming career, Richard Howatson’s affiliation to the Limousin has been unwavering – he has been involved with the breed as a suckler sire for more than two decades. His brother, Meirion and nephew, Glyn, run a similar operation just up the road at Ty Newydd, and the two holdings share machinery to reduce capital investment. Richard was brought up on a farm, but worked as a farm manager for many years, until his employer decided to give up in 1998. At that point, Richard and his wife, Glenda, took over the land as farm business tenants along with their son, Gersom.

As soon as he gained full control of the 380-acre farm, which is just outside the village of Nantglyn, near Denbigh, Richard started moving away from the dairy cross suckler cow. His aim is to run a herd consisting almost entirely of red Limousins, and since 2002, all heifer calves have been registered under the Soar prefix. In addition to the 43 suckler cows, the holding also supports 1,000 Cheviot ewes as well as 200 Texel crosses, with all the lambs finished at home.

The livestock have to be hardy to live at Plas Newydd, as the 380-acre farm stretches to 1,700 feet above sea level, with some parts classified as Less Favoured Area. The cattle have access up to about 1,000 feet on the all-grass holding over the summer, and are usually brought inside from the end of October until the second week in May. Out-wintering is not an option, because of the region’s heavy annual rainfall, says Richard. Straw-bedded housing is favoured, as there are limited opportunities for slurry-spreading. However in recent years, straw prices have been “crippling,” he admits. The farm’s 2005 straw bill came to around £4,000.

Calving mainly takes place in spring. “We calved a few heifers last summer, but we came to the conclusion that their progeny were a bit big. This time the plan is to calve six heifers during December,” explains Richard. “But on the whole, we like spring-born calves. It tends to be easier to achieve a uniform group, which is better for our customers and therefore helps to maximise prices.”

Plas Newydd has traditionally sold store bullocks at 12-13 months old and kept any heifers not needed as replacements for finishing. The cattle are usually fed a rolled barley/concentrate mix, plus silage or hay until 18-24 months old. This season, however, all the animals will be finished at home, in an experiment to see whether farm profitability can be improved. To this end, a new building has been put up, with the father and son team doing almost all the work themselves to save costs. “It will be interesting to see what happens when we finish all the cattle, but I think it is likely that we will end up going back to selling stores,” predicts Richard.
“Stores incur lower feed bills and turnaround is faster, which improves cash flow. I think it is going to prove very expensive to keep animals inside for an extra winter in an area like this, where we have no access to home-produced cereals or straw.”

The cows are generally long-lived, and Richard estimates that the average age is around 10-12 years old. He is proud of one female in particular, which is still producing a healthy calf each year at 15 years old.

When it comes to selecting bulls, the Howatsons will pass over the larger animals, in favour of a more compact type. This is mainly because breeding females need to be fairly small in order to cope with the hilly terrain. The current stock bull – Nebo Victor – was purchased for 1,900 guineas as a 10-month old calf at Carlisle. He came from Meirion Thomas of Llanrwst and will be three years old in January 2007.
“Victor’s first crop of calves were born this year and they are already looking promising,” comments Richard. “There have been no assisted calvings and we like his conformation – he has a good back end and an excellent topline, as well as decent width.
“In the past we tended not to pay a lot of attention to EBVs, because it’s shape we’re after, and that can be judged by an animal’s visual appearance. But in Victor’s case, we were impressed with his father’s 400-day weight, which we believe is the most important element if we are to please the buyers who take our cattle.”
Previous sires used on the herd include Paddy John, which was bought from Neville Owen of Corwen. Having passed on his bloodlines to the Plas Newydd calves for five or six years, Paddy John produced some good breeding heifers, as well as some excellent store cattle, says Richard.

AI is also used occasionally while the cattle are housed to produce around 5% of replacements. Two recent semen straw choices have been from Vivaldi and Nenuphar.
“Vivaldi looks as if he has good muscling, and will be able to throw calves with a lot of shape. He may even produce a breeding bull for us to keep,” says Richard. “I picked Nenuphar because I have seen some of his sire progeny and they seem just the type we are looking for.”

The target is to increase cow numbers to around 60 in the short-term, partly because Gersom enjoys working with the suckler herd. He has developed a keen interest in producing show quality stock, and the farm’s cattle have been in the ribbons on many occasions in the past. Soar Urien enjoyed particular success in the showring during the summer of 2004, after being sold to Mark Hallam of Derbyshire at seven months old. Urien went on to win her class at the Royal Welsh Winter Fair and was reserve pedigree show champion at the Birmingham Primestock show. She was eventually sold on for £1,900 at the Red Ladies Derby sale in Carlisle during 2005. “We get a lot of pleasure out of seeing our animals go on to win at shows, and it can also have a significant effect on overall average prices,” says Richard. “For example, we sold four show animals which averaged £750 in 2004.”
“We try and halter-train all our replacement heifers, because even if they don’t go on to the show circuit, it makes them a lot easier to handle. As we are keeping all the calves this time, we will be able to gain a lot more showing experience. Showing is also a great social event, and we enjoy having the opportunity to meet other producers.”

Richard is adamant that he will never change the breed of cattle he keeps at Plas Newydd, and Gersom is in full agreement. “The Limousin suits us very well and we couldn’t imagine even considering any other breed. The females are good mothers, and they are easy-calving, as well as being very hardy with excellent feet, while the calves have really good conformation,” says Richard.