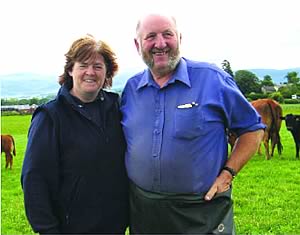 The Limousin’s exceptional ability to convert forage into meat is one of the principle reasons behind Steadman Dodd’s unwavering loyalty to the breed. Other cattle may grow larger, but producers looking for profitability will find it very difficult to beat, he says.

The Dodds’ herd at West View is made up of a mixture of pedigree and commercial Limousin cows, with around two-thirds of the females carrying the Redrock prefix. Female youngstock are mostly three-quarter bred heifers, some of which are bought in at 12-20 months and sold with their calves at foot. The farm, at Temple Sowerby near Penrith in Cumbria, also supports a flock of 350 Texel and Beltex cross ewes.

The holding runs several stock bulls, with a particular favourite being Redstone Storm, bought from George and Beryl Haslam in the Scottish Borders. Seven-year old Storm is by Napoleon, out of a West View cow. “Storm has broken a shoulder bone and walks with a marked limp, but that doesn’t stop him producing some very long, clean and well-muscled calves,” comments Steadman. “He complements our thick-set cows, which tend to be rather shorter in stature than some of the other herds around.”

One of Storm’s progeny who has yet to prove himself is the homebred bull, Redrock Bandit. The 18-month old, out of Croftlimousin Skye, had a birthweight of 39kg. It is hoped he will go on to sire some high quality, show-type calves. 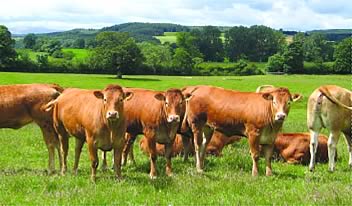 A good stamp of calf has consistently been produced by the six-year old Sulki, sired by Ionesco.

”Sulki is an ideal match for our red crossbred heifers,” says Steadman. “He doesn’t have quite as much muscle as Storm, but he compensates by having tremendous fleshing and width.”

Allanfauld Rumpus is mainly used on the commercial cows, to produce calves in early spring. The bull, by Westhall Lovejoy, was bought at the May 2002 sale in Carlisle, where he was awarded the reserve overall championship. Costing 8,500 gns, he came from Archie MacGregor of Kilsyth, Glasgow.

When the Dodd family moved to the holding in 1962, they set up their own milking herd. For many years, beef was only produced as a sideline. However after losing their livestock during foot and mouth, the couple decided to give up dairying and focus entirely on beef and sheep production. Their decision was taken partly because the house and buildings are divided by the busy A66 road, which connects the east and west of the country. Moving the cows across the highway on a daily basis was becoming more difficult with the increase in traffic, and the pair also felt they were ready for a change in lifestyle and more flexible working hours. 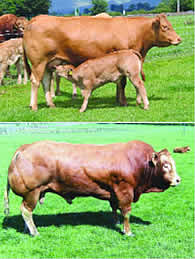 They chose to re-stock with pedigree Limousins from Tom Cheshire, of Buckinghamshire, who was selling off his Grange and Shiptonlea cows. A further 100 crossbred heifers were also bought in for bulling.

Most of the heifers are calved during February/ March and July/August, producing animals that can be offered for the main sales at Carlisle in late spring and early autumn. The rest of the herd calves evenly throughout the year.

“We have been pleased with the prices we have achieved recently,” says Steadman. “Last spring we sold a heifer with her calf at foot for £2,300 to Scotts of Thirlwall Castle, and our heifers and calves averaged £1,666 at Middleton-in-Teesdale.”

While the breeding policy ensures that cattle can be offered for sale virtually all year round, Judy points out that the system takes a bit of managing. She says Steadman is rarely seen without his ‘little black book,’ in which he keeps track of calvings, and notes down any females ready to serve.

Despite requiring consistent attention to detail, the policy ensures that the farm is able to sell around four finished cattle every week. Steadman admits that this emphasis on maintaining a healthy cash flow probably dates back to the times when he was used to receiving a monthly milk cheque. It also helps to spread the workload for the Dodds, who are assisted by their full-time worker, Joe Harrison. He has been working on the farm for the past 14 years.

The finished cattle make a significant contribution to farm profits. Home-bred Limousin bulls are reared on a mainly barley diet, but heifers and bullocks are bought in at a wide range of ages and offered a combination of grass and maize silage, barley and a protein blend.

Animals purchased at 18 months take an average 10 weeks to finish, with many achieving U or E grades. Killing out percentage has reached 70.2 for bullocks and 68 for heifers in recent months.

At Carlisle, lots on offer from Dodds generally come into the top 10% price bracket of the day. Regular buyers include local butcher, Jim Mulholland – himself a Limousin breeder – and agents for Pioneer Foods at Carlisle. West View’s beef bulls also find a ready trade.

It is not uncommon for Steadman to buy back cattle he has bred in the past. For example, Scotts of Thirwall Castle regularly purchase his heifers with female calves at foot, only for the calf to return to West View at 12 months old. The heifer will go on to produce its own calf, and it is quite likely that the duo will end up being sold back to the Scotts.

The red Cumbrian soil on the 400-acre farm, which includes some land rented from the National Trust, is free draining and fertile. One recent innovation tried out last year to ease pressure on building availability was the out-wintering of 40 cattle. The policy worked so well that it will be repeated this season.

“I chose an area beside the river that was earmarked for a crop of barley,” Steadman explains. “Silage, straw and minerals were used to supplement the diet, and the animals fared very well in spite of the bad weather. In fact some individuals finished the winter a little heavier than I would have liked.”

The former dairy cubicles are used as suckler cow housing, but some cattle are bedded on straw. This arrangement suits the farm well.

“The cubicles are capable of holding 100 heifers over the winter, and they do thrive in the cubicles. However some of the older, heavier cows struggle to fit into the stalls, so we put them in the straw-bedded housing.”

Whatever the future holds for West View, it seems certain that the family will stick with the Limousin.

“We’ve had Limousins since 1979, when we started using them on our dairy cows to produce good beef bulls that we could finish at home, as well as heifers for sale with calves at foot,” says Steadman.

“We originally chose the breed because it was what the butchers wanted, and that situation still holds true today. Years ago, we kept all sorts of breeds, but we found that the Limousin had better conformation and much a higher food conversion rate. They may eat less, they may weigh less, but I think they offer much more in terms of profit.

“Our cattle also have great temperaments – most of the cows enjoy having their backs scratched, and the whole herd is very easy to handle.”