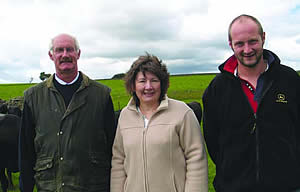 The first word that springs to mind when it comes to describing Hunthills is traditional. The family farm, near Dumfries in Scotland, relies on tried and tested methods of suckled calf production, with the Limousin playing a pivotal role in breeding policy.

Stuart and Mary Wright have been keeping Limousins since 1985 and currently run a herd of around 80 females, mainly three-quarters bred. All the cattle are sold at the nearby Lockerbie Mart, with spring-born calves offered in late autumn and August-born calves sold at 12-13 months old.

The couple are assisted by their son, Colin, who recently left home after getting married to Kirsty, a dairy farmer’s daughter from the Hebridean island of Gigha. Stuart’s father, William, has now retired, although he still helps out on a regular basis.

Hunthills lies close to the village of Parkgate, and stands at about 500 feet above sea level, with a high average annual rainfall. The soil is free-draining but also very stony, so grass is the only crop grown. Until 1987, the land was rented from an estate, but the family then bought the property, not long after the decision had been made to use the Limousin. Stuart credits the breed with improving farm profitability at a time of heavy financial investment.

Maintaining a reputation for top quality suckled calves is key to the farm’s success, and Hunthills cattle tend to attract the same buyers year after year. Stuart has always looked to the Llandovery-based Dyfri herd, owned by David and Aled Edwards, to supply him with sires. 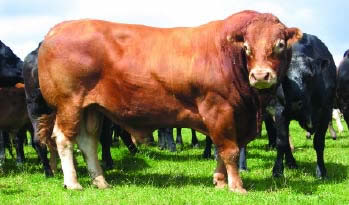 “It’s all about getting repeat business,” says Stuart. “We know we must be doing something right, because we have loyal buyers. Therefore we feel it’s important that we carry on producing a similar crop of calves annually. Using the same male bloodlines is one of the ways we can try and keep up this consistency.”

The current stock bull is nine-year-old Dyfri Officer, purchased at Carlisle for 5,000gns. The bull, which has a Beef Value of LM 23, achieved a 300-day weight of 447kg. He is by Jockey, a bull that has performed well for the Edwards family and is noted for his high growth rates and muscling. Jockey has sired a UK record 10 bulls that have sold for £10,000 or more.

“Officer’s conformation suits our cows and we have had few calving problems,” says Stuart. “He is very sound and always throws good calves.”

Before Officer arrived on the scene, Dyfri Debonnaire was the mainstay of the herd. The whole family remembers him fondly.

“Debonnaire lived until he was 16 years old,” explains Stuart. “He had a great temperament and must have sired about 1,000 calves while he was with us.

“In the end, his hips started to let him down. But rather than send him to the abattoir, we asked the vet to come and put him to sleep at home. He performed a great service for us, so we felt it was the least we could do.”

Every now and then, a potential show calf is spotted, and the family have been in the ribbons on many occasions at Lockerbie. One highlight was in 2005, when they won the overall reserve in the suckled calf championship with a heifer. More recently, lack of time has prevented Mary from attending as many shows as she would like. She works part-time in the local bank, as well as managing the business accounts.

The entire sheep flock was culled as a contiguous case during foot and mouth disease, but fortunately, the cattle were spared. Losing the sheep has released some extra land, and the plan is to move up to 100 cattle in the near future. This will help to boost income for the two households that depend on the farm, but meanwhile Colin will continue to do some contract silaging work over the summer.

The replacement rate is very low, and it is not uncommon for cows to carry on producing good calves until they reach ten years or more. Prior to foot and mouth, heifers with calves at foot were bought in on a regular basis, but the farm then moved towards breeding its own replacements.

Nevertheless, some new blood has been brought in over the past couple of years. In line with Stuart’s approach of sticking to a system that has worked well in the past, he regularly approaches the same vendor, who is based at Castle Douglas.

“I like cows to be milky, with a good rear end and a nice shape,” he says. “They also need to have a good udder, and some size and length about them.”

Calving begins in March and April, with the majority of cows calving inside. They are housed in cubicles, with a straw-bedded creep area available to the calves. After turnout, they are given a pour-on wormer, but no other treatment is usually necessary.

“Of course, we get the odd case of pneumonia and scours, but our calves are generally very healthy,” Stuart points out. “The spring-born calves live off their mothers and grass, without the need for creep feeding.”

A batch of 35-40 calves are offered for sale straight from the cow, but late-born calves are kept back and weaned during November and December. They remain at grass for a few weeks, after which they are brought inside and their diet supplemented by silage and bought-in concentrates. This later batch will be ready for the spring sale at Lockerbie.

Calves born in August and September are put into the buildings before Christmas, with the aim of selling them in the early autumn of the following year.

Stuart says the family has discussed the possibility of finishing some cattle, but has decided against the idea.

“We can’t grow crops easily and straw is very expensive, so the extra returns would very likely end up being offset by a big bill for extra feed and bedding,” he says.

Focusing on the herd has allowed the Wrights to produce some very good suckled calves, and they have no intention of changing their winning formula.

“Like many other farms in this area, we used to buy in Aberdeen Angus cross Friesian females from the dairy herd. But the popularity of the Holstein meant it wasn’t easy to get hold of the stamp of cow we liked,” says Stuart.

“When we made the switch, we initially chose the Limousin because we thought it would be the most profitable breed, and we have never had reason to regret our decision. The Limousin has allowed us to improve the quality of our calves, especially the back end, and the buyers seem to like them.”