Since Thomas Threlkeld switched to using the Limousin exclusively on his herd, Herries Farms has gone from strength to strength, producing yearling stores that attract the attention of market bidders and private buyers alike. The coastal farm, which is based on the Caerlaverock Estate near Dumfries, supports 300 mainly Limousin cows, split into two groups for calving. As well as 800 acres of in-bye land, which includes 300 acres of arable cropping, there are also 400 acres of marsh grazing rights. The Scottish farm is part of a 5,500 acre estate owned by Lady Mary Mumford. 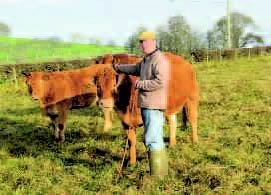 When Thomas took up his position as manager, the farm had 600 breeding ewes and just 28 suckler cows, mainly Hereford and Aberdeen Angus crosses, put to a Limousin or a Charolais bull. “After reviewing the breeding policy in 1997, I opted to use the Limousin exclusively. It’s a decision that I’ve never regretted,” says Thomas. “I’ve always liked the breed, and I felt that it was doing a better job for us. The calves are quick to get up and start suckling, and the finished product suits both butcher and consumer.” Sadly, the farm lost its entire sheep flock, which had reached a total of 1,200 head, during the 2001 foot and mouth outbreak. However the cattle escaped culling, and Thomas chose to increase cow numbers from 180 to 300, rather than re-stock with more sheep. “I think this was the right thing to do in hindsight. I believe that beef has a better future than lamb. To help with grazing management, store sheep are taken on a temporary basis for a neighbour.” Historically, private buyers have taken most of the farm’s 10-13 month old cattle, but Carlisle auction mart is now the primary outlet.

In spring 2007, prices for heifers and steers averaged £600/head at the mart. Some 20 heifers have also been sold to a neighbouring farmer, who was setting up a new herd and had admired the quality of the livestock at Herries. “Having a mixture of buyer types spreads risk. In fact, the returns have proved very similar, but I like to think that selling through the mart helps to keep me better informed about current values. It also acts as a showcase for the type of stock I am offering,” he says. Despite a history of buying in bulling heifers as replacements, the farm now uses mostly homebred cattle to maintain numbers. “Breeding my own replacements gives me greater control, as well as a lot of pleasure. I enjoy watching the quality of the cattle improve as time goes on. My priorities are milkiness, conformation and growth potential, coupled with good temperament and high health status. “Some of the cows are fully registered, but I’m not really interested in the pedigree side. My main goals are to carry on producing stores with good conformation and pleasing my buyers.”

The 100 autumn calving cows are calved during August, September and October, with turnout normally mid to late April. Calves are weaned at the end of June. After being brought inside in November, the herd is fed a winter ration comprising silage and home-grown barley, along with protein and minerals. The cows only receive this high quality diet while they are running with the bull for eight weeks. Over winter, the calves are creep-fed with rolled barley, proteins and minerals. Spring calvers give birth in March and April, with a home-produced ration introduced in July. Calves are weaned and housed at the beginning of November.

Thomas has a strict regime to keep the calving pattern under control. The bull is taken out after spending about nine weeks with the cows. Five weeks later, the group is scanned. Younger barren females with no past history of health problems are moved across into the other herd, while the remainder are culled. Two bulls have played a major role in stamping their quality on the herd. One is Cloughead Outlaw, purchased from renowned breeder, George Hutton of Setmabanning, Cumbria. The other is Lyvennet Paladin, which came from another Cumbrian breeder, Fenton Brass.

The farm has high hopes for its newest acquisition, Albert, a Malibu grandson bought privately in 2006 following a trip to France with a fellow Limousin Society member. Albert’s progeny, due to arrive in spring 2008, are eagerly awaited. “Albert has the length I am looking for, plus a tremendous back end and plenty of style,” comments Thomas. “I usually pay no more than £3,000 for my bulls, but it’s not always easy to find the quality I’m seeking at that price.” The cattle at Herries receive a lot of handling, and generally have good, quiet temperaments.

Thomas is quick to point out that some of the credit for this must go to his excellent stockman, Colin Cairns. Tractor driver, Stuart Callendar also plays an important role in the day to day running of the farm. Close proximity to the western coastline brings a rather unusual grazing management problem for Herries. Each winter, flocks of geese arrive in their thousands, usually staying until April, when they return to Norway. As well as consuming large quantities of grass, they also damage the land. This means turnout dates can often be delayed by as much as two to three weeks, compared with other farms in the region, says Thomas. “This area attracts large numbers of birds each year, including Barnacle geese, which are a protected species, and Greylag and Pinkfoot. There can be as many as 10,000 at a time in just one field. “The geese also get into the crops, and eat the shoots down to the crown. Although the plants will grow back, yields are severely affected. On some fields, the farm is given compensation for the loss of grazing, but on others it receives no extra money. Only non-audible methods can be used for scaring the geese away, and it’s impossible to keep them under control.”

Thomas has no intention of changing the farm’s current policy. Stocking rates have reached their maximum, and the present system is working well. “The Limousin has been growing in popularity for many years, with very good reason,” concludes Thomas. “When I first gave my total loyalty to the breed, I was worried that the cows wouldn’t produce enough milk. I’m glad to say that I was proved wrong in that respect. “The Limousin is easier to feed than some of the other Continental breeds. The cattle may not grow as tall, but they always produce the choicest cuts for the butcher. Another bonus is the cull value. Returns are often higher than for other breeds, with prices reaching £600-£700 for a cow that has already given excellent service by producing a high number of good quality calves over her lifetime.”