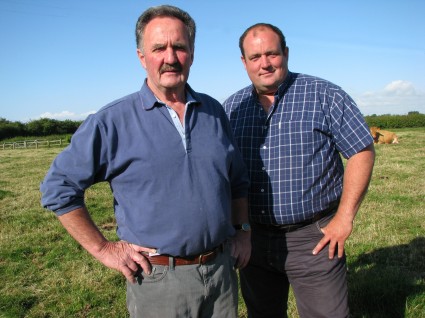 A father and son team with a commercial suckler herd in South Wales relies on the Limousinto sire easy care cattle with good growth rates, and the ability to attract a premium at auction.

Ben Attewell and his father, Len, manage Chapel Farm, near Magor, Caldicot with the help of one full-time worker. Ben has worked at home for the past decade, having spent several years as a livestock auctioneer. He credits his experience with giving him an overview of the market, as well as fine-tuning his ability to pick out some of the best animals at keen prices, when he is buying in store cattle.

The lowland holding covers almost 500 acres, with a mixture of owned and rented land supporting the suckler herd and flock of sheep. It includes 100 acres of saltmarsh close to the River Severn. The main steading has been in the family for three generations.

Limousin bulls are used almost exclusively on the 110-strong suckler herd, which includes pedigree animals registered under the farm’s Capel prefix. All home-produced youngstock not required for breeding are finished on the farm. To fill the available 450 cattle places in the buildings, store calves from 8-12 months old are purchased at local autumn sales. Ben has a clear idea of the type of animal he is looking for.

“We work on the principle of only buying in cattle that are as good as our own,” he explains. “I favourLimousintypes, because they give us the best opportunity of hitting premium prices in the marketplace.

“Bidding has reached an unrealistic level in recent months,” he comments. “The situation where the value of store cattle is equal to the prices being paid for finished animals cannot continue indefinitely – that is a harsh commercial reality.”

Cattle are generally sold from October until June. Heifers are taken to 580-640kg, with steers at around 630-710kg. The primary outlet is Ross-on-Wye Mart, where bidding is enthusiastic for the stamp of animal the farm is producing. The highest price achieved in 2009 was £1,470, or £2.20/kg, for a home-bred Limousin cross.

Despite Ben’s best efforts, he finds that he has little time for showing primestock. However he usually manages to put forward an entry in a couple of local events at Christmas time, and has been awarded several championships.

A mixed ration containing grass silage, home-grown maize silage and brewers’ grains is the staple finishing cattle diet. Bought-in concentrate is offered twice daily. This extra feeding helps to ensure that any health issues are detected at an early stage. The cows’ diet is mainly forage and straw-based, although Ben is currently trialling mixer feeders, to further increase straw inclusion and reduce costs.

One innovation on the farm is the system of putting down a fine woodchip base about four inches deep, before bedding up for winter in the loose housing.

“The woodchip provides an immediate bed for the cattle to lie on when they first come in, and it also helps with drainage,” says Ben. “Since we started this practice, the cattle have been cleaner, and there has also been a reduction in the number of mastitis cases. When it is removed in spring, three-quarters of the material will have rotted down, so there is no problem when it comes to spreading.”

Another idea that has worked well is using a three-quarters roof for the free-standing, mono-pitch building that has been put up in recent years. With the walls made ofYorkshireboarding, air flow is ideal for keeping the cattle free of respiratory disease.

Size is important when it comes to selecting replacement stock, as the cull price makes a valuable contribution to overall profitability. The aim is for a mature cow to weigh 600-750kg. Good temperament is another key factor, as Ben believes that there is little justification in keeping animals that are dangerous to work with. No distinction is made between commercial and pedigree animals – he says he is simply looking for the best examples he can find.

Easy calving, good muscling, thriftiness, hardiness and high growth rates are considered very important, when choosing a new bull. They paid the top price of the day at the May Show & Sale at Brecon Auction Mart this year, bidding 7,450gns for Reserve Champion, Pyebrook Calvin. Put forward by the Matthews Family from Ludlow,Shropshire, the 2007-born bull was sired by Tunnelby Scallywag and is out of the Nebulon daughter, Winnington Tawny.

Brian Jones’ Marron son, Bailea Tudor, has had a strong influence on the herd, having mostly been used on the larger cows. Meanwhile Gunnerfleet Ugein, a 5,000gns bull, has added width and power. He is by Fieldson Officer, out of Gunnerfleet Opion. 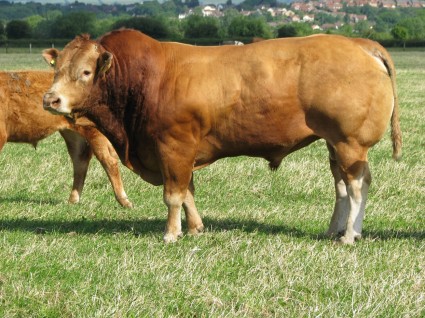 Bailea bloodlines also feature in a bull that has just been sold to a neighbour for breeding at 10 years old. Ben says the longevity of the Greensons Gigolo son is proof that correct breeding will pass on the economic traits that are so vital to the commercial suckler herd producer. Also on the farm is QueensheadUtah, a half brother to the 52,000gns Queenshead Altea.

The main calving period takes place in the spring, with all freshly calved cows held in individual pens. Ben is a firm believer in this practice, which he says encourages the bond between cow and calf. Better mothering and higher colostrum intakes are two of the perceived benefits.

Cows are routinely checked for whites within six weeks of calving, to encourage fertility and keep the calving pattern tight.

“Spring-born calves suit our system; we like as many cows to calve in a block as possible,” says Ben. “It concentrates labour input, and produces a uniform batch to wean into the sheds in the autumn time. It also minimises bullying.”

Herd health status is considered a top priority at Chapel Farm, and Ben is keen to credit his local veterinary practice – Tyndale Vets at Thornbury – with helping him to set up a programme to reduce the risk of disease infection. All cattle brought on to the farm are isolated for at least one week.

To the family’s great relief, the cattle have been TB free. However Ben admits that he is always very nervous during the annual test, because the disease is prevalent in the area. For this reason, he tends to favour cattle from mid-Wales, where there have been fewer confirmed cases.

The herd has been vaccinated against BVD for the past three years, resulting in lower incidence of scours, mastitis and retained cleansings. Six weeks prior to calving, the cows are given an injection of Rotavec Corona, to boost antibody levels and protect their unborn calves from bacterial and viral diarrhoea. Calves also receive an IBR vaccination.

“The total cost of the vaccination works out at only a few pounds a head,” says Ben. “It is very good value for money, when you consider the financial effect of an animal dying, or failing to fulfil its potential.

“Our goal is for cows to produce a good strong calf that does not need bottle feeding – we don’t want to spend valuable time hand-rearing calves that will often need expensive medication.”

Bull insurance is another subject which the Attewells view as important to their business. “You would insure an expensive vehicle, so why not treat an expensive animal in the same way?” asks Ben.

The Limousin Society’s own Taurus Insurance Initiative offers pre-sale contracts to vendors for Luck Penny Insurance. Along with transit to the sale and a National Beef Association six-month breeding warranty, vendors also receive All Risks Mortality and Loss of Use Insurance, for three months. The purchaser is invited to top up the cover, to a full 12 months.

“We like to have new bulls insured for the first year of their working life, because that is when the risk of sustaining damage is at its greatest. They have usually experienced a period of intensive growth, and it takes time before their ligaments and tendons are fully strengthened.

“New bulls are also semen-tested, which gives us a slightly discounted rate on the insurance. The test doesn’t guarantee that the bull is fit to work, but it will tell us if he is sub-fertile. There haven’t been any problems in the past, but infertility is something we want to avoid at all costs.”

With his thoughts already turning to the next bull purchase, Ben has a message that he would like pedigree breeders to consider:

“It would be an advantage if all bulls put up for sale were accompanied by a document, proving their fertility, and giving a current herd health declaration,” he says.

“There is perhaps too much emphasis on high production figures – we suspect that pushing hard for statistics has a negative effect on longevity,” he adds. “Our requirement is for growth rates to follow a more natural pattern, so that the genuine, efficient performer can shine through when he goes in with the females.”